On the ground ... which I want to prepare for my new seedlings, there are seven broccoli plants which have been eaten by slugs, snails and pigeons but not by me. Actually, it would be more accurate to say seven plants grown from a packet of seeds labelled as Broccoli Romanesco Natalino because some botanists classify it in the cauliflower family (botrytis) while others consider it a cross between broccoli and cauliflower.

Last March when I was selecting seeds, I aimed to trial one vegetable to start realising my vision of an ornamental kitchen garden. Romanesco caught my eye because its unusual shape was intriguing and it was described as having a nutty flavour (could only be an improvement on cabbage flavour). Another attraction which I didn't recognise at the time, is that it's a vegetable which prefers a cold climate, adding interest to the winter garden .... but now the remaining broccoli skeletons are being overcome by spring bulb leaves. 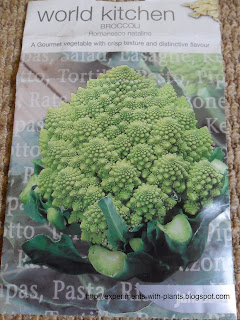 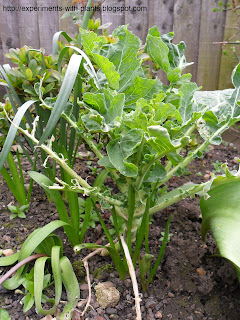 Its shape is almost fractal because each floret is a smaller version of the whole broccoli head and each floret itself is made up of smaller florets with the same shape. The way that the florets are arranged in clockwise and anti-clockwise spirals follows Fibonacci mathematics (derived from a sequence of numbers 1, 1, 2, 3, 5, 8, 13, 21..... ) which recurs in nature. The missing link is that broccoli and the rest of the brassica family are cruciferous, ie. their flowers have four petals - and 4 is not a Fibonacci number.
During the past year, since I sowed the seeds, I imagined cutting open a Romanesco, counting the Fibonacci spirals and feeling the points with my fingers. Then I started having wilder fantasies where I tasted the nutty morsels flavoured with anchovy and onion or butter and lemon. However, this weekend I accepted defeat, the chances of an alien green (described as chartreuse - by a seed supplier), pointed broccoli appearing in my garden this year are pretty slim .... the weather is getting warmer and the plants will be prone to bolting anyway.

Instead I have some spring greens (broccoli leaves are edible by the way). There is no risk of these head-less plants bolting as they have totally missed the boat  ..... 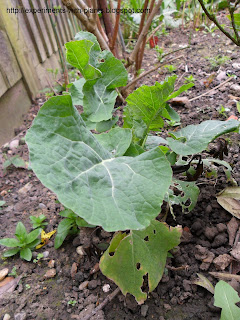 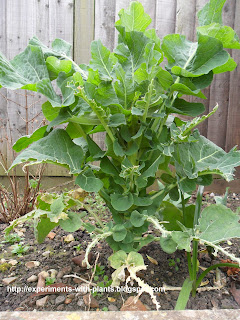 I also have what looks like purple cauliflower which is (confusingly) a type of broccoli with purple flower heads. Both broccoli and cauliflower originated from wild cabbage, evolving modified flower heads which are edible before the flowers open and bitter after. 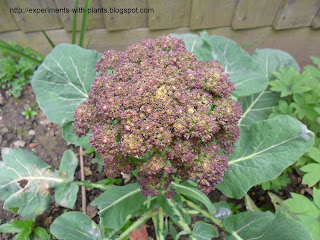 The difference between cauliflower and broccoli is that the green or purple flower buds seen in broccoli are replaced by white infloresence (tissue consisting of a multitude of microscopic flowers) in cauliflower.  When I first saw the purpleness, I feared there were insects crawling over my broccoli, yet so far I have had no insect pests in my garden. I like to think this is due to the balance of nature resulting from my organic approach and the concept of growing vegetables amongst flowers. I wont be too smug, in case any brassica pests have laid eggs on the ground, rotating crops will ensure that the pupae wont complete their life cycle. 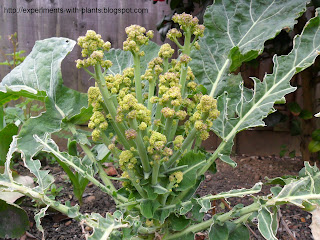 When I photographed this plant for my 11FEB2011 post, it looked like a regular cauliflower. I didn't feel it was ready to harvest then because it hadn't developed the chartreuse colour of Romanesco or the pyramid-shaped florets. Mr.T advised removing some leaves to accelerate the growth of the flower head as his father used to practise this in his allotment, none of the gardening web-sites mention this tip for broccoli though. Now it has the same colour as advertised on the seed packet (if I ignore purple tinges here and there), but you would be hard-pressed to find a mathematical formula which could define its topology. Having said that, this plant looks the most edible...
considering it took longer to give birth than a human baby, I don't have the heart to sever it though.


Then finally there are these two victims of pigeons. I should have covered them with netting when I first witnessed the damage, but I left them out of curiosity to see what would happen. I was toying with the idea that the slugs and pigeons are in effect doing the same job as Mr.T's father .... 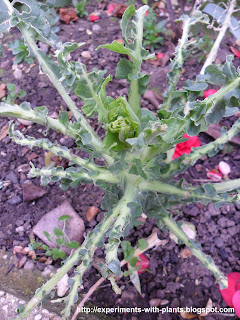 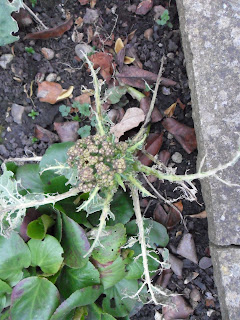 What's next you may wonder ?   Well, I wont be digging them up just yet, and I've just sowed more seeds this weekend ... from the same packet.

Tips for growing broccoli that I shall take note of for the future :
(1) When transplanting seedlings, plant them deeper so that the bottom leaves touch the soil (more roots will grow and add stability).
(2) Harvest broccoli before the buds open, or it will taste bitter.
(3) Cut the central spear of sprouting broccoli to induce the side shoots to grow into bite-sized florets.
(4) Rotate crops so that brassicas are only grown in the same soil one year out of three.
http://www.vegetable-garden-guide.com/growing-broccoli.html
"Bolting is a survival mechanism in a plant. If the weather gets to be above where the plant will survive, it will try to produce the next generation (seeds) as quickly as possible."
"add mulch and ground cover to the ground, as well as watering regularly in order to keep the soil temperature down."
http://www.gardeningknowhow.com/vegetable/what-is-bolting-what-it-means-when-a-plant-bolts.htm
This shows the damage caused by pigeons which looks similar to my shredded broccolis. "Shooting can be effective" (?) ..."The only certain way of protecting vulnerable plants from pigeons is to grow them under netting."
http://apps.rhs.org.uk/advicesearch/profile.aspx?pid=207

Is Romanesco a broccoli, cauliflower or broccoflower ?
http://articles.latimes.com/2011/feb/11/food/la-fo-marketwatch-20110211
... the jury is out, but it's definitely a decendant of wild cabbage :

http://www.pfaf.org/
"Cauliflower and broccoli are the same species and have very similar structures, though cauliflower replaces the green flower buds with a white inflorescence meristem."
http://en.wikipedia.org.wiki/Cauliflower
"There are three commonly grown types of broccoli. The most familiar is a often referred to simply as "broccoli", and sometimes calabrese named after Calabria in Italy. It has large (10 to 20 cm) green heads and thick stalks. It is a cool season annual crop.
Sprouting broccoli has a larger number of heads with many thin stalks.....
Purple cauliflower is a type of broccoli ..... It has a head shaped like cauliflower, but consisting of tiny flower buds."
http://en.wikipedia.org.wiki/Broccoli

The mathematical shape of romanesco broccoli :
The Fibonnaci sequence 1+1+2+3+5+8+13 ...
http://plus.maths.org/content/os/issue3/fibonacci/index
... recurs in nature (please watch this brilliant video even if you're not interested in numbers or nature) ...
http://www.guardian.co.uk/science/punctuated-equilibrium/2010/oct/17/5
http://www.wired.com/wiredscience/2010/09/fractal-patterns-in-nature/?pid=179&viewall=true
... including broccoli ....
http://www.maths.surrey.ac.uk/hosted-sites/R.Knott/Fibonacci/fibnat.html#veg

Recipes I would have cooked if my romanesco broccoli was edible :
Romanesco Broccoli Polonaise, made following this recipe for cauliflower, allows the beauty of the entire vegetable to be displayed on your plate. The broccoli/cauliflower is boiled whole and then topped with  breadcrumbs toasted in butter, lemon, parsley and crumbled boiled eggs :
http://whatsforsupper-juno.blogspot.com/2009/03/cauliflower-with-butter-lemon-parsley.html
I chose this Sicilian recipe of broccoli with pasta, anchovies, raisins and pine nuts because the pictures are so stunning and make my mouth water, but I would most likely replace the raisins with chilli flakes :
http://fxcuisine.com/default.asp?language=2&Display=75&resolution=high

For more Blooming Friday  On the Ground  posts  visit  Roses and Stuff on 1st April.

The World Kitchen Broccoli is the coolest plant. I am so intrigued by the formation.

I've just referred your blog to a dear friend who by coincidence about to cultivate some broccoli on her allotment! Fascinating post :)

GWGT - It's formation is defined by a mathematical formula which recurs in nature (but not in my garden apparently).

Thanks Mark & Gaz - I am honoured that you referred my blog when you know so much about gardening yourselves.

What an interesting post (and I've got lots of spring greens, too, hrrumpf). I was going to give up, but maybe another try....

My guess is the Broccoli Romanesco Natalino is a broccoflower which I always enjoy preparing and cooking. Our local grocer does not always carry it but I will buy it if I see it.

I had no idea that pigeons were destructive in a garden.

Hi b-a-g, your scientific approach is shining brightly today. I especially like your observation on the very interesting Romanesco, which perhaps would be more at home in Aberdeen. My experimentation with edibles only goes as far as a few salad leaves.

I like your attitude! Your curiosity and mathematical approach makes for good reading, if not good eating. (Although the critters surely think the eating is fantastic) The great thing about gardening is there is always hope!

Thanks beangenie - I am going to try again, but I probably wouldn't recommend it to anyone else. One year seems a really long time to wait for a vegetable.

Thanks Lifeshighway - It wasn't really pain, I just planted them and waited to see what happened. I haven't actually seen the pigeons attack my broccoli. I have seen them tearing off strips of cabbage but I couldn't tell if they were eating it or just doing it for fun.

Thanks Alistair - I think you might be right about broccoli needing a colder climate. The first broccoli floret appeared just after we had snow.

Thanks Deb - I am learning that about gardening and it encourages me to be more hopeful about life.

Romanesco came in my share from my CSA and I loved it. Well worth trying again.

I love Romanesco, love the look, love the taste. So sorry for yours, glad you haven't given up, determined not to skip netting mine once they germinate... Yikes those pigeons create more devastation than slugs! It can be bit disheartening, this veg gardening lark...

Carolyn - I'll translate for the British readers : Community Shared Agriculture. In the UK, the CSA chase after divorced parents who don't support their kids.

Janet - So glad I visited your blog and checked out your plant protection ideas : http://plantaliscious.janetbruten.co.uk/2011/03/back-to-the-plot/

Thank you for sharing what you have learnt. Just to share, my first batch of cabbages were badly destroyed by caterpillars. Subsequently, I didn't have a problem anymore although I didn't do anything to protect them. Nature is strange. It's full of surprises.

I wanted to email you in regards in any possible advertising opportunities you may have with your website. I'm looking to earn support for a national cause and get visibility for the "plant 1 billion trees" project. Let me know if you would be interested at all in supporting this cause or if you want more information on it. I look forward to talking to you soon!

One - We are two very different gardeners. You like critters, I don't.

Our Romanesco was a disaster this year. Only one plant survived and when the head developed it grew in a pyramid but otherwise looked like purple sprouting broccoli. What a let down. Presumably the seed was dodgy. I think I will buy it from the local green grocer in future!

Thanks Vasi - I hope you have a wonderful April too !

Easygardener - As romanesco is a hybrid of cauliflower and broccoli, maybe the seeds are not true, this would explain why the plants are variable. I'm not an expert though, I'm just guessing.

thanks for the fascinating post - I don't grow those veggies, but I am interested in them scientifically and gastronomically!

Thanks Catmint - I've never seen romanesco in the supermarket. I'm still wondering what a nutty broccoli would taste like.