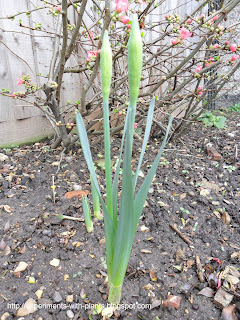 Is it possible to learn to love ? ... a plant that you don't find particularly attractive.  My relationship with daffodils is certainly not a case of love at first sight and I'm not the only one, there are like-minded people out there, who are against the cultivars at least.  Personally, I would prefer if they had existed longer in their erect bud state, the young grey-green leaves, almost succulent, and the semi-transparent sepals shrouding the compressed, yellow blooms within.
It’s difficult to put my finger on the exact features which displease, but I suspect it’s mainly the trumpet. It just seems to me as if a daffodil is having a big sneeze, especially when the petals are reflexed backwards and the trumpet is elongated and flared at the end, but then my nick-name is BigNose (kindly bestowed by Mr.F) and they do say that it’s human nature to deplore faults in others especially if you share them. “None of us can stand other people having the same faults as ourselves.” - Oscar Wilde

Is it wrong to look at daffodils, then block them out in my mind’s eye and visualise the tulips soon to arrive ? 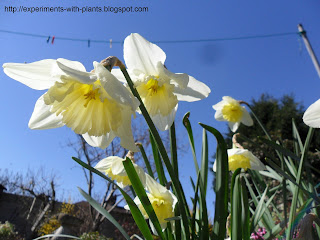 Surely, tulips are poised compared to ungainly daffodils, keeling over each other soon after they appear. The Greek myth of Narcissus falling in love with his own reflection as he looked down into a pool of water, adds an element of fantasy for a short while, until the flower heads are faced flat on the ground and the leaves turn limp and slimy. I sought to understand why Welsh people celebrate with daffodils on St.Davids Day 1st March, hoping I could rejoice with them in a similar way. It didn't help though, because in the Welsh language the daffodil is called Peter’s Leek (even though it’s toxic), so in modern times they wear a daffodil in their button-hole as a less pungent-scented alternative to their true national emblem. 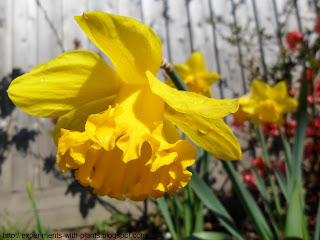 I was under the impression that the Dutch were to blame for breeding tall, gawdy hybrids in different colours with flouncy or muted trumpets, depending on their fancy, but according to a U.S. daffodil data-base, a number of countries are at it. I do feel a twinge of guilt when I remember how I thoughtlessly tossed a bag of bulbs in the supermarket trolley just because they were cheap. I once read Carol@FlowerHillFarm’s story where she described her journey as she learnt to “manage her land”. At the time, I didn’t feel those words applied to me with my little back garden in surbubia, but now more people are writing about natives such as DonnaBella@GardensEyeView and their message is beginning to affect me. 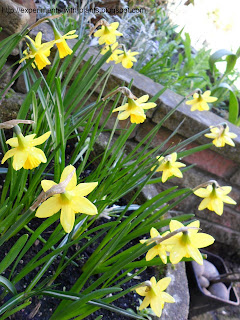 My only consolation is that the small perfectly-proportioned daffodils in a pot are closer to their wild cousins. They have lasted longer than the large daffodils and they are standing straight.
Wild daffodils (narcissus pseudonarcissus), native in Western Europe, are less than 35mm tall with yellow, cylindrical trumpets and paler yellow petals. They are not in danger yet, but could be in the future, due to hybridisation with garden varieties.
Other people who don't like daffodils :
Germaine Greer : " When sheltered in woodland, the daffodil gets as much of the March gales as it can handle. In exposed sites it is often battered flat, especially if its microclimate is so warm that it has blown prematurely, as happens in built-up areas." http://www.telegraph.co.uk/gardening/gardenprojects/3310049/Country-notebook-fluttering-and-dancing-in-the-breeze.html
" Lake District daffodils immortalised in the romantic poetry of William Wordsworth are in danger of being overrun by a more common variety. "
" Although the wild species, Narcissus pseudonarcissis, is not threatened, it is already showing signs of turning into a hybrid after cross-pollination with the common, much taller, daffodil. "
http://www.independent.co.uk/environment/hybrids-could-leave-wordsworths-wild-daffodils-in-the-shade-654630.html
Dr Andy Tasker (from www.ihatedaffodils. org.uk) : " Some misguided individuals apparently believe it’s a good idea to plant all sorts of daffodil bulbs in places such as ancient woodlands, meadows and country lanes. Well, they are wrong. They don’t look nice. It’s like putting lipstick on the Mona Lisa. Apart from the indigenous species, daffodils should be in only three places – in pots, in your garden and in Holland. "
http://www.dailymail.co.uk/news/article-1265084/I-hate-daffodils--says-wild-flower-lover-launching-man-campaign-rid-countryside-mass-produced-bulbs-look-like-lipstick-Mona-Lisa.html
Information about daffodils :
"The daffodil is native to western Europe, and is found in the area bounded by Portugal in the west, Germany in the east, and England and Wales to the north. It is not clear whether the species is truly native to Britain, or was introduced long ago and has become naturalised. "
" The Latin name for daffodil is thought to have been inspired by Narcissus, who was a figure in Greek mythology said to have fallen in love with his reflection in a pool of water. The nodding head of the daffodil is said to represent Narcissus bending down and gazing at his reflection."
http://www.kew.org/plants-fungi/Narcissus-pseudonarcissus.htm
" And so today each year on St. David's Day the leek is worn in the cap badges of every soldier in every Welsh regiment. Outside the army however, many other Welsh folk have substituted the daffodil for the leek, perhaps because it looks more attractive and certainly smells a lot better. Interesting to note however, that one of the many Welsh names for a daffodil is Cenhinen Bedr, or Peter's leek."
http://www.historic-uk.com/HistoryUK/Wales-History/TheLeek.htm
For daffodil classification and a database of daffodil photos :
http://www.daffodilusa.org/daffodils/div.html    http://daffseek.org/query/query.php?opt=M1
©Copyright 2011 b-a-g. All rights reserved.
Content created by b-a-g for  http://experiments-with-plants.blogspot.com/2011/03/daffodils-21-mar-2011.html
Posted by b-a-g at Monday, March 21, 2011

I have to say I really like daffodils, but I like the species types and the smaller plants the best. I find hybridized tulips to be much more gaudy and inappropriate than even the "worst" daffodil though.

I hope I am having a good affect on you :) I certainly enjoy your blog and you know weeach come to our own places at our own paces...I would plant more tulips if I didn't have so many deer...

I love daffodils because of their bright yellow colour as much as they lovely heads and petals, standing erect with their green leaves! Wish can grow them here in my garden, that would be so lovely!

Carolyn - I'm guessing that the tulips I bought in the £1 shop wont be your favourites then, they haven't made an appearance yet.

Donna - You are certainly having a positive effect on me and not just for making me aware of native plants. Thanks for not judging me while I'm still finding my way.

Thanks p3 for reminding me not to take things for granted. I'm sure that if I wasn't able to grow daffodils, I'd be wishing I could (the little ones at least).

I love daffodils. Tulips on the other hand, have never stolen my heart. I like the brash bold statement of a jonquil over the stately elegance of a tulip.

I do love Daffodils, their cheery yellow colour is the one that best represents spring the most, and their flowers last longer than other spring bulbs too! :-)

This was a rather funny post. I was smiling as I read your commentary. I do like daffodils but I can see your point. My father had a big nose and didn't like daffodils either! Hmmmm...

Lifeshighway, Mark & Gaz - it seems that all the votes are for daffodils so far ...

I love daffodils! I have bought bulbs and will be attempting to have daffodils for the first time this year!

I love it, your post that is, and the Daffodils also of course. Could it be the result of my rather large conk, I said conk. Well anyway your knowledge for something which you don't like is indeed extensive. Don't ever plant the large ones, get yourself a collection of the dwarf Daffs and you will find that they herald the arrival of Spring beautifully. And yes you can learn to love that which once you had a dislike for. happy gardening b-a-g

Christine - I look forward to seeing your daffodils, just because you like them.