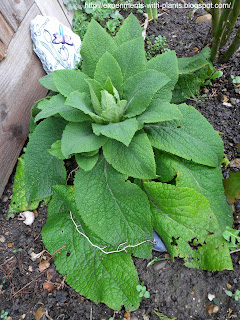 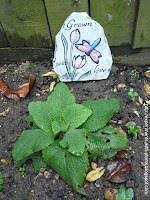 Apparently spring is the season for foxgloves to be born again ... measurements continue to be recorded.

Here are the biggest and smallest foxgloves excelsior grown from a packet of seeds sown almost a year ago. The ragged leaves, so glorious last summer, form a nest from which new growth arises. I hover above them with my tape - measure, unsure whether to log
the span of the entire plant, including original leaves or just the fresh, pointed rosettes coated with white bloom. I opt for the former and keep my fingers crossed (not easy to do while manipulating a measuring device). 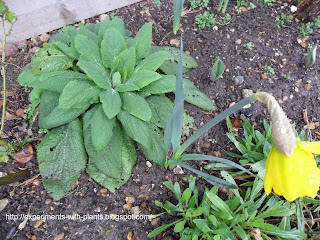 Daffodils and crocuses are out now, with bright yellow, vibrant violet and pure white petals, but it is the foxgloves that capture the attention of this gardener, even though there are no signs that these plants will ever flower. I gaze at them with anticipation, yet not knowing what to expect.

Ever since I discovered the scientific papers of Wilfred Ernest Warren, an electrical engineer who had a keen interest in botany, I've read and re-read them wishing he was still alive. They have been scanned from type-written manuscripts, there are no pictures or diagrams but the words are phrased skilfully, as one would for a work of literature. 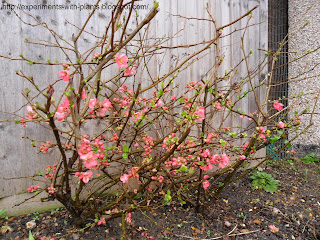 I can picture clearly in my head what he describes without the need for visual aids. I search for some kind of emotion towards foxgloves in his sentences, but can't find any, I suppose to be objective a scientist put keep himself remote. He does however explain (in third person), that the idea for his research started when he saw in his garden, growing amongst ordinary foxgloves, a monstrosa variant, crowned with a large bowl-shaped flower. He wanted to learn if this characteristic would pass to the next generation according to Mendel's theory of genetics, which dictates that a dominant gene will have supremacy over a recessive gene if they are paired, the monstrosa gene being recessive. 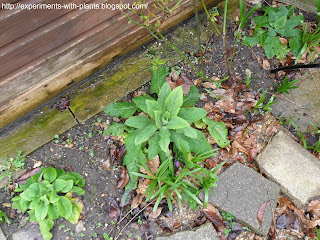 It seems ridiculous to compare my mickey-mouse experiment with Warren's, but the main difference is that his studies focussed on understanding Nature and how characteristics are passed from one generation to the next, while mine investigates the effect of Nurture. For example, I would like to be able to predict if the foxglove next to the daffodil, which has had a relatively trouble-free upbringing, will flower more or less profusely (I haven't defined how to measure this yet) compared to the little one to the right of the pink flowering quince, which seems to be suffering from some kind of inferiority complex which started when it was born into a very over-crowded pod of a seed-tray. 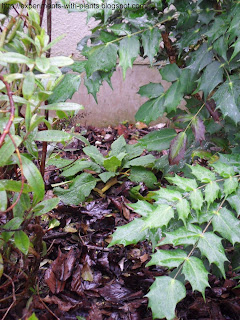 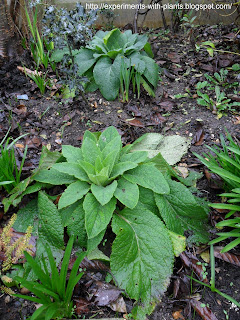 The three foxgloves above planted along the side of my garden shed are exposed to decreasing levels of sunlight respectively. While the two foxgloves to the left are dosed with optimum quantities of moisture and sunlight, in my estimation. Finally to the right, a foxglove grows in virtual darkness.
So this is the other factor in my experiment, the environments where I planted the foxgloves, which may have a stronger or weaker effect than up-bringing, only time will tell.
For the whole story, click on foxgloves in the cloud of keywords on the right
For more Big and Small  posts visit  Roses and Stuff
Scientific papers by Ernest Warren :
A PRELIMINARY REPORT ON SOME BREEDING EXPERIMENTS WITH FOXGLOVES. Biometrika (1917) 11(4): 303-327 doi:10.1093/biomet/11.4.303
INHERITANCE IN THE FOXGLOVE, AND THE RESULT OF SELECTIVE BREEDING Biometrika (1922) 14(1-2): 103-126 doi:10.1093/biomet/14.1-2.103
To learn about  genetics and inheritance :
http://www.biology-online.org/2/3_crossing_over.htm
Posted by b-a-g at Sunday, March 06, 2011

I so much like this. I do similarly weird things in my garden - but with no science and no knowledge as a base . . . it's just good to see what happens.

My foxgloves - the ones in the ground are big. The ones in a half submerged terracotta pot are in the middle (though smaller than they were because I tore of the leaves along one side which had become raggedy because of cats.)The ones in ordinary pots grow in fits and starts, depending on whether I think of watering them or not. Lots of bayleaves had fallen into them and I hadn't realised this was having a waterproofing effect. They perk up quite quickly after each thirsty droop. The smallest is a neglected one in a pot which I'd forgotten about and came across by chance last week.

I gave a one away in the autumn. If it got planted, it will be interesting to know how it fared in Wales instead of Dorset.

Oh how I do love foxgloves. Somehow they remind me of my father. I always associate them with a more temperate climate than what we have in the SE US(humid, hot summers; however, I do see them in gardens around town so I may have to try them in my garden. I am looking forward to seeing yours in bloom.

I am hoping to see my foxgloves in spring. They are not so reliable here.

Esther - It's comforting to know that I'm not the only person doing weird things in my garden. I thought about removing the ragged leaves too, but I didn't because they seem to be offering protection to the new leaves.

Karin & Donna - We are fortunate in the UK because foxgloves are natives.

Oooh this is really interesting! I'm never organised enough to do anything like this, but I have been fascinated by the huge variation in size of foxgloves at this time of year. Maybe I could mark them somehow and then compare flowering size/abundance later on.

b-a-g, I really do enjoy my visits to your blog. Good to get an update on your Foxgloves. The bi-annual Excelsior is thought by many to be the best of them all.Mainly because they flower all the way around the stem whereas many of them have a lopsided appearance due to the fact that flowers are restricted to one side only. I will look forward to seeing them in Summer, one of Myras favourites.

Excellent Janet ! - then we can compare results. If enough people are interested, we could even have a foxglove meme at flowering time.

yes, the experiments continue. I love all the measuring and recording of data in your garden. I am looking forward to an entertaining gardening season.

Thanks Alistair, I was prompted to blog an update by your comment last week. The packet of hundreds of foxglove excelsior seeds cost just 78pence. Who would have thought one could get so much pleasure for less than £1!
ps.I guessed Myra had impeccable taste.

I love foxgloves and I'm so impressed by the fact that they can survive without soil. They seem to survive on sand alone...

About 15 years ago I noticed that my neighbor's foxgloves came back reliably and were very beautiful. They gave me some and now I just let them self-seed all around forming new rosettes in the summer/fall and flowers talks the next spring. I love them.

Katarina - a factor that I didn't trial in my experiment - soil quality. Maybe next year ....

Carolyn - Neighbours with foxgloves .. sounds like ideal neighbours to me.

Excellent post and I like your novel approach to gardening - I've certainly never measured my Digitalis. Does your nurture theory include talking to foxgloves? Trying to keep all other variables constant is going to be a challenge as even the interest you have taken in them may have an effect. Even Mendel fiddled his results ;)
Laura

Thanks Laura - I love my foxgloves equally whether they be big or small!

Hope you are happy with me mentioning you on today's post for Esther's Boring Garden Blog.

Let me know if not.

I love foxgloves and have tried several places in my garden, hoping to find the perfect spot. This year I planted some in an area I originally thought was too sunny, but the soil is good and, just as important, is close to the water hydrant! I admire your organization. It will be interesting to see the results of your study!

More than happy Esther - thank-you for linking to my post.

Deb - The biggest one above is in a sunny spot and is prone to wilting, but I don't want to predict the result.

I've been looking through your blog and have really enjoyed myself. I am originally from central London and was transplanted to Ontario, Canada many years ago. I used to grow foxgloves in my English garden and have never had the same success with them here. My favourite book as a child was also The Secret Garden and I now have several different copies of it on my bookshelves.

Thanks Crafty Gardener - Welcome to my blog, glad you connected with it. I haven't come across your blog before, but I'll be keeping an eye on what you're up to.