The blossoms of Japanese Cherry and Quince are the eye-candy of my garden, gorgeous to look at but you wouldn't go so far as biting into the fruit ....

Just like most apple trees and roses, ornamental cherry trees are grafted. The rootstock is usually a hardy dwarf variety, while the grafted stems are taken from a specially bred hybrid, as demonstrated by my cherry blossom tree. Remembering the flowers that bloomed last year, I would classify it as a kanzan, with mid-pink flowers consisting of several petals, but after peering up at the tight buds a few days ago I noticed down below, sprouting from an exposed root, a thicket of suckers which have already started to flower. 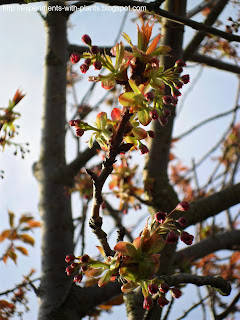 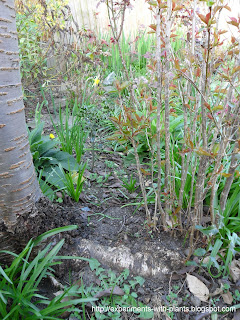 It was timely, as I was introduced to the Plant a Billion Trees campaign this week. Was this Mother Nature's way of asking me to plant more trees ?  I'm not sure, because as I walked along the streets in my town I noticed that several cherry blossom tree﻿s have suckers, not flowering like mine though, because they hadn't been allowed to grow for so long. Why have trees evolved to progress like this ? Surely, if left alone the thicket would start draining nourishment from the tree, unless the purpose is that the strongest survivor will replace the tree when it dies. Why do cherry trees grow suckers but camellia bushes don't ?  I've searched the internet but I'm still clueless.
I know that my tree was once grafted because the five-petalled flowers on the suckers resemble wild cherry rather than the flowers of the parent tree. They have a frail beauty with their semi-transparent, blushed petals and out-reaching stamens and it seems unfair to me that this species has been considered worthy only as root-stock. 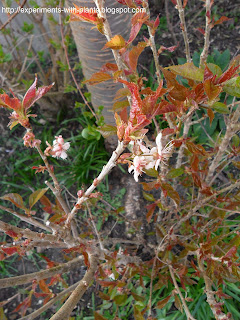 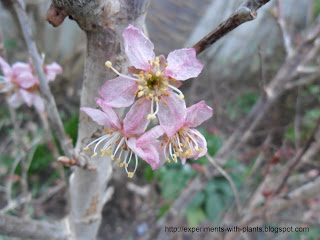 I wonder if grafted trees grow suckers because it's the only way that the root-stock can reproduce itself ?
... and doesn't every living organism have that urge ?


In a bid to help the root-stock fulfill its desire, I'll apply a layering technique, packing soil around three suckers, to encourage them to grow roots. I'll do the same with three more except for cutting a notch at the base to see if this speeds up the process. If successful, I could separate a sucker from the parent and plant a tree. 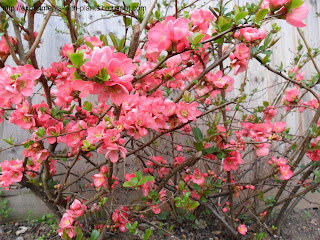 However,  my flowering quince has suckers and I don't believe that's grafted because the whole bush is covered with homogeneous salmon-pink petals, suckers and all - so much for my romantic notion. Hence, my second theory is that plants grow suckers if they bloom in winter or early spring when there aren't so many insects around to pollinate them .... but then I managed to turn one sick shrub rose into four plants by dividing off the suckers and I anticipate them to flower in the height of summer. Enough theorising, sometimes there are more questions than answers ...  I'll just have to accept that some plants grow suckers while others don't - it's difficult for a scientist, whereas a gardener can't be hung up with analysis paralysis especially at spring-time. 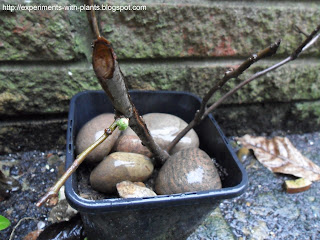 Taking advantage of the fact that the flowering quince does reproduce in this way, I pulled off a ready-rooted sucker which grew from underground at Christmas time and planted it with the idea of creating a bonsai tree. The execution was admittedly rather crude, but at least it's settled which is the first step. Even though there's the beginning of a bud on the left, I'll probably cut the entire branch off eventually, because it's the twig on the right that I'm interested in as it has the potential to be styled with the aid of garden wire into a classical bonsai image of an overhanging tree.

Cherry Blossoms in Japan
"Cherry blossom trees are so ubiquitous all throughout Japan, that they are used as an official measure of the changing of seasons. There is something called the sakura zensen (桜前線） or the cherry blossom front, which tracks the blossoming time of cherry trees throughout the country."

Suckers and more ...
http://plant_doctor.typepad.com/the_seasoned_gardener/2006/08/suckers_watersp.html
How to create a Bonsai tree ...

For your survey: my tree peonies, which are all grafted, produce suckers that flower different colors. My U.S. native hornbeam, which is not grafted, suckers wildly from its roots.

Hi bag, Thank you for your funny caption! :) I've put a link to your blog in my current post; http://onenezz.blogspot.com/2011/04/caption-fun.html.

Ahhhh! I love cherries and of course their blooms too. One of the trees/plants that I yearn to grow but can't :( doe to climatic restraints. I learnt quite a lot from your blog. Thank you.

Thanks Carolyn - That's interesting, I didn't know tree peonies were grafted. If that's the case, it's possible that my tree peony cutting wont turn into a tree.

Thanks One - I'll go and check out the other captions.

Welcome Chandramouli S - I like checking out blogs from around the world - interesting study on caterpillars.

As usual i like your post too much, wish to plant this 'species' at my garden. May be in my dream garden in future ;) BTW I like cherries too much...cherry blossom, alwayz dream it can be real one day. Hopefully ;)

I love quince so I will be very interested in watching your bonsai quince tree project. Please keep us posted.

I have had success with branches rooting from azaleas. I cover them with dirt and at the next season I cut them from the main plant and transplant them.

Thanks Orchid - The grass is always greener on the other side.... I wish I had orchids in my garden.

Thanks LH - I love the quince too, it's brightened up my garden all winter.

Put your Events Calender idea to the forums. There are so many memes it would be wonderful to have a master list.

I personally wish plants did not sucker. I have a plant, originally labeled 'Viburnum Augustifolium', which is trying to take over my front garden. I did not realize how badly until I looked under its lower branches, and it looks like a forest of trunks in there. It's about twenty feet tall and wide. I'm wondering just how far it will extend itself.

EE - OK Done. No responses so far though.

debsgarden - It's almost as big as my garden. I would imagine you have to axe it down on a daily basis in the summer.

I agree with Deb, the suckering cause too many headaches. And many plants are grafted to grow in conditions not meant for the part we see, or to make a plant assume different form. They do not grow true. Or at least not what you are expecting.

Funny on your comment. Daisies do have feelings and I apologize. I should have learned when I posted on the wrens not getting the respect from the cardinals. LOL.
Donna

Forgot to comment on the Japanese plants. I so like them. And we have many with japonica behind their name. I like Japanese landscaping and design too. So relaxing.

Donna x2 - I loved your interpretation of "eye candy" http://greenapplesgarden.com/2011/04/07/eye-candy-color/

Hi b-a-g, an intriguing post. Thanks for link - the Wild Cherry apparently naturally suckers so maybe this is the clue to why my Japanese crab apple also has them. Had never thought to let these develop but like your idea of growing a tree from them. Will follow your quince bonsai experiment with interest

Nice color on your little tree......how's the bonsai coming along?

Hi Dave - That particular one died. Most of my potted plants get named bonsai but I've yet to master the technique of getting the aged look.