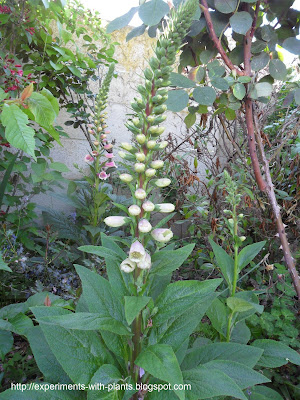 The foxglove plants are at different stages of flowering now. When the buds are half-open they contain a lime-green hue, their lower lips uncurl to reveal hairy, speckled throats which funnel insects to their pollen. 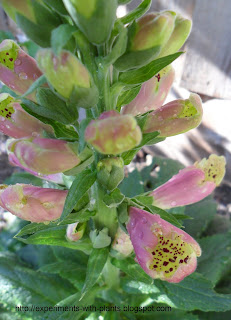 The plants in the sunnier positions grew well until April, then we had an unusually warm month with hardly any rain, during which they stopped growing and the leaves at the bases burnt. The plant below was the biggest when photographed for my March post, but it is short and stubby compared to the others now. The plants in the scene to the left, highlighted in November , growing in the shade have taller, slender flower spikes, reaching for the sun, but this growth is counteracted when they are forced to bend down as the buds gain weight. 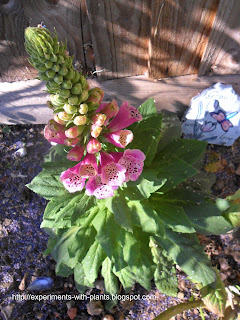 The runt plants which struggled to survive at the beginning due to overcrowding in seed trays, have undergone an incredible growth spurt. The two plants below were photos no. 5 & 9 respectively in both January and April posts. I noticed a couple of weeks ago that the runt plant on the right (no longer dwarfed by the flowering quince) had tiny black eggs laid amongst the new flower buds and the stems leading up to them. 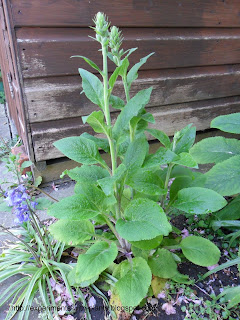 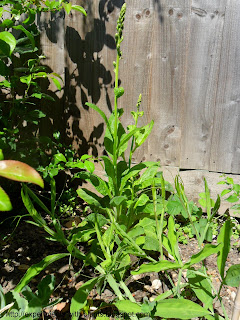 To my horror, I discovered on the internet that there is such a thing as a foxglove aphid which has black shiny eggs that hatch into yellowy-green flies and I immediately jumped to the conclusion that this was the diagnosis. Just my luck, I thought, that my favourite plant would have its very own aphid. I tried jetting them off with a hose, but they were stuck fast, it was only possible to dislodge them by wiping off with a tissue while hosing simultaneously. I used cotton buds to get around the flower buds, like a parent cleaning between a baby's toes. This works as long as I repeat the procedure daily at the risk of damaging the delicate buds.

While bathing it one day, I noticed that the eggs were more matt black than shiny, and they seemed to be moving. Taking a photo for a closer look, I saw that the eggs were actually round, black insects with two protrusions at the rear, whitish legs and antennae. If I had known that they looked like that, I would have been less eager to touch them, even with a tissue. I classified them as black bean aphids based on descriptions and photos found, wondering why bean aphids were infesting my foxglove. A clue could be in the photo above where you can see some self-sown sweet pea growing in front of the foxglove.

However, I can't find any websites which list black bean aphids as a foxglove pest except for a scary photo of a foxglove in the woods coated with familiar black dots.The stems of the foxglove are softer and more succulent than the sweet pea, so you can understand they would be more enticing to the aphids. Depending on the stage of their life cycle, if plants get over-crowded, the female black bean aphids may grow wings and fly to another plant where they take advantage of their ability to reproduce asexually and start a new population. They suck sap out of plants and turn it into nectar. The nectar attracts ants which "milk" the aphids then return the favour by transferring them to less populated plants. I was just getting my head around the idea of a black ant milking an aphid, when I caught them at it, while I was trying to capture the wrinkling of the leaves as their undersides get populated with suckers. 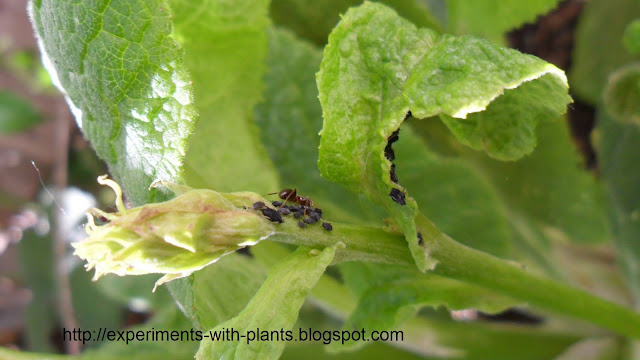 More recently another foxglove plant shows signs of infestation at the diagonally opposite corner of the garden under the wisteria. Could it be more than a coincidence that peas and wisteria are in the same family as beans ?
I got an idea from Stacy@Microcosm 's post when I found a ladybird (a very rare occurrence in my garden) and set it to work on the aphids. I hoped it would settle down for a feast but it disappeared after a quick snack. It's possible to buy on-line ladybird eggs to distribute around your garden, also parasitic wasps which kill the aphids from the inside. Fer@MyLittleGardeninJapan has had success eliminating aphids using his recipe of washing-up liquid, water and garlic. For the moment, I am continuing to hose down one of the ravaged plants and leave the other one untreated. The factors of the foxglove experiment are increasing out of my control, meanwhile unperturbed, I've started making plans for the next generation ... 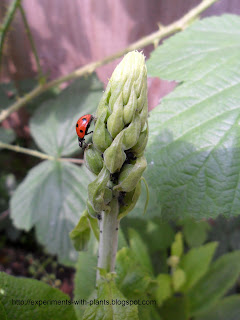 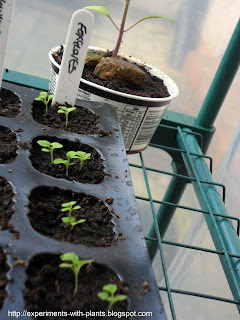 Oh I hope the foxgloves will not be affected..I just love them..and how odd they are infesting the plant next to the bean family plant...I have wanted ladybugs for my garden...I bought a house, food and now I have to find time to buy the bugs and nurture them...

Hi! I have ladybirds in my garden. They decide where they wish to hang around. They are usually at the capsicum plant. So if I see some problem with a plant, I usually just snip off the affected area than to transfer the ladybirds. I thought it is easier this way. Fox glove is really beautiful.

Your caption has been selected. You are pretty good with them. The snails won't that eerie after all, right? I have put a link to your blog. Thanks for participating

I hope your foxglove does well. Aphids are very annoying to fight. The ladybug is the best ally against them, maybe she will come back and eat a bunch more.

Thanks a lot for the mention!

Any plants that have aphids here get a washing with dish soap and water. It works every time. Your foxgloves are beautiful.

Donna - I look forward to seeing your ladybird house in action. Hope your frogs don't eat them.

Thanks One - I'm tempted to snip off the leaves but most of them are in the flower buds. The critters in your garden are much better-looking than mine.

Thanks Carolyn - Fer adds a hint of garlic. I might try it with and without ...

Hi b-a-g, do like this follow up of your digitalis up, up and away. The speckly thoats are heart-stopping! Unfortunately the dry weather is harvesttime for aphids, sucking up the precious juices from the softest of plant tissues. Ants will even carry aphids to plants so they can tend and milk them like cattle.
As well as the adults, ladybird larvae will gobble up aphids - look for red & black articulated dragons and pop those on the plants.
Laura

For some reason my foxgloves did pitifully poor this year. I will have to look closely to see if the ants are farming aphids on my plants!

Laura & Deb - At first the thought of ants milking aphids made me feel a bit queasy. Now I get quite engrossed watching them go about their business that I forget I'm supposed to be trying to get rid of them.

The ladybugs are great little hunters. It just seems to be too few of them. The black one is a new one to me, thanks for posting this. I battle aphids all the time on my roses. I use an oil/soapy mix that works pretty well, the only problem is that they reproduce so fast. You can get them off the plants, then replacements are back in no time. Ridding of them is a process.

Kate/ Beyond the Brambles said...

Hi b-a-g! I love everything about foxgloves except the waiting part (waiting for the plant's bloom that comes in the 2nd season). I'm with Carolyn about the insecticidal soap for aphids. It's the most safe, convenient pest control I know. No matter what, now that your seedlings are growing I'd say your foxgloves story has a happy ending!

b-a-g, the frustrations in gardening are never ending, probably what makes the successes all the more exciting. I agree with the others soapy water works ok, remember not to do it on a sunny day or you will end up with shrivelled leaves, the soap seems to increase the chance of this.

Donna, Kate(welcome) & Alastair - Yes, I had to resort to soapy water in the end because I found them on a third plant, very cleverly hidden where the flower spike bows down.

Fascinating pics of the horrid little aphids. fer's garlic spray seems to work really well, it has sorted my roses out. Your foxgloves are way ahead of most of mine, though I am taking heart from your description of the "runts" catching up and am watching, hopefully...

b-a-g, I thought aphids were pesky enough, and now you tell us that they can reproduce asexually, too. That's too many aces up their nasty little sleeves! Sheesh.

I hope the soapy water has done the trick for you. I've had better luck attracting lady birds when I've put some flat-blossomed flowers (daisies, yarrow--anything where they can reach the nectar easily) near the infested area. Potted annuals work great, because you can move them to the pests. A shallow dish of water at ground level can help attract them, too. Both of those are more long-term solutions, though, not emergency fixes for your beautiful foxgloves.

Thank you so much for the mention and link!

Thanks for the ladybird tips Stacy. The soapy water worked very well, I wish I had started using it earlier. I felt uncomfortable using washing-up liquid at the beginning because it didn't seem organic, but when the aphids started multiplying out of control I had no choice.