I'm not one to brag, usually ...  but my oriental poppies are ENORMOUS.
These plants have featured in gardening blogs and magazine articles, so what can I write in addition ?
I have found that oriental poppies are hardy plants which are easy to grow from seed, even for a novice. (This was probably written in bold letters on the seed packet). Maybe, I'll just tell my story ...

In March last year, I sowed poppy seeds outdoors and waited. Nothing happened by the end of May, so I sowed some seeds indoors in seed trays. As with the foxgloves, strong & runt oriental poppy seedlings sprouted. The four strongest seedlings on the left were planted outdoors in a flower bed a few weeks later. Then replanted further apart in autumn. The middle photo was taken in winter after the snow melted, leaving them bedraggled but still alive. Then in early spring they perked up. 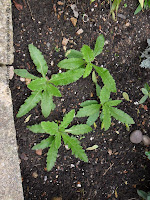 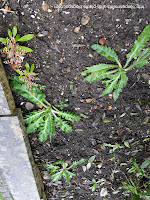 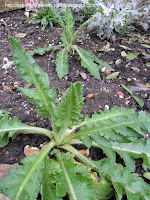 By April, the four poppy plants had merged into a messy tangle of leaves.
Fearing over-crowding, I decided to remove one plant to a pot. It flopped within a couple of hours. 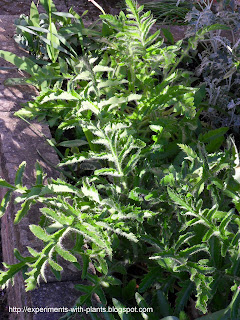 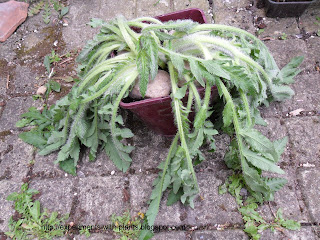 The next day I was looking at the messy leaves in the floor bed, thinking that removing a plant hadn't really improved the situation, when I noticed a prickly bud with a hint of red, giving a clue of what was inside.
I immediately checked amongst the limp leaves in the pot and found another bud starting to form. Guessing that the plant would struggle to revitalise the leaves and bloom simultaneously, I made a rash decision to cut off most of the leaves, just leaving a few small ones. 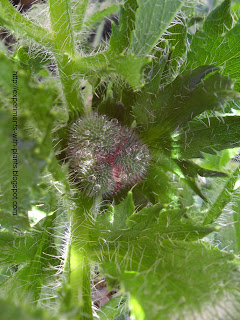 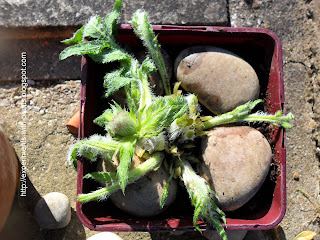 During May, more buds continued to form in the flower bed.
The bud in the pot died, but the leaves sprung back to life miraculously. Well, I thought it was a miracle until I read Carol Klein's article which suggests cutting the whole plant to the ground after flowering finishes, and a second flowering may follow in the same year. 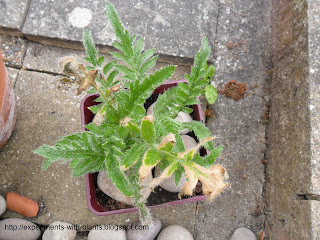 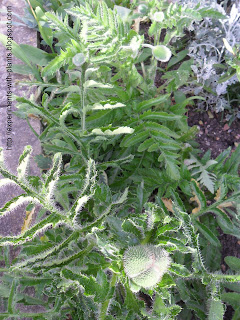 I wish I had been around when the buds popped. The bees discovered the poppies before I did, rolling about on the fluffy bed of stamens in the reflected red glow of the poppy petals, their own seedy motel room booked for one week only.
Hopefully, the potted plant will flower later for them. 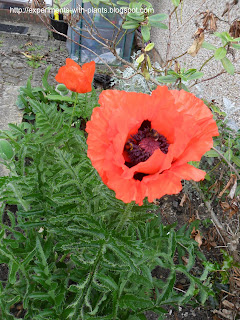 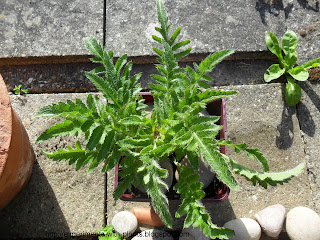 As Ursula Buchan points out, oriental poppies are out of proportion in the small gardens that we have in the UK.  However, I rarely look at my garden from a distance these days, I used to before I became a gardener. My visitors do, and probably see a confused collection of allsorts, they remark politely on how they can tell that I love plants. 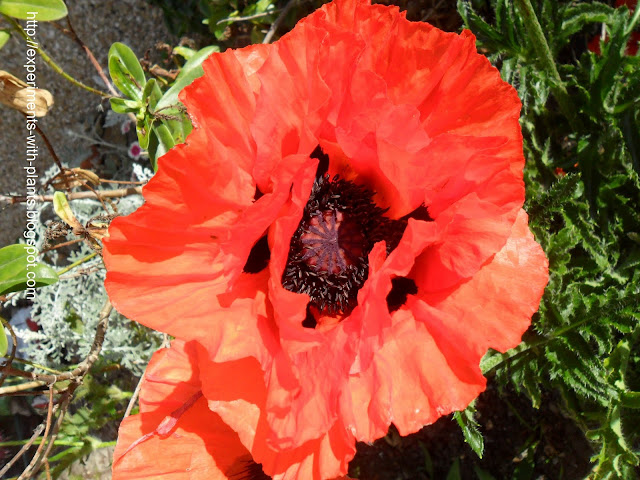 I staked the poppy plants in the flower bed, because the flowers were falling over. When tying to the stake, I bunched the leaves as well as the poppy stalks together loosely, which gives a neater appearance. I should have done this earlier, but then I wouldn't have removed the potted one and seen for myself how resilient these plants can be. 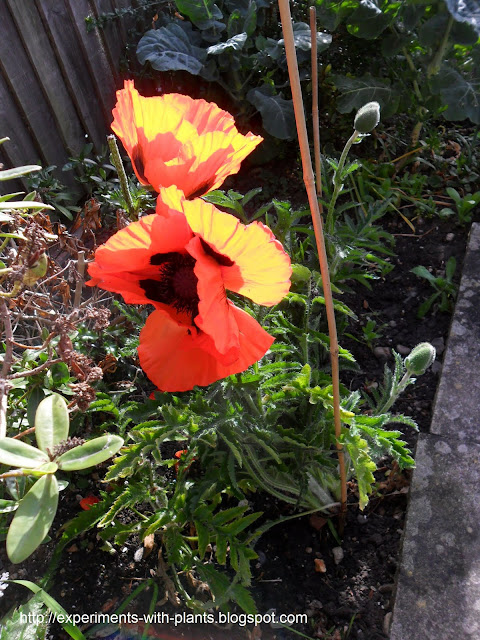 The petals start shedding within a week after the bud bursts open. I'm guessing that the flowers are short-lived because they attract so much attention from bees that fertilisation is completed quite quickly. That is the purpose of flowers after all.
Apparently, seed heads must be removed if you want the plant to produce more buds. Needless to say, I'm removing heads from two plants but leaving one untouched to see what happens. 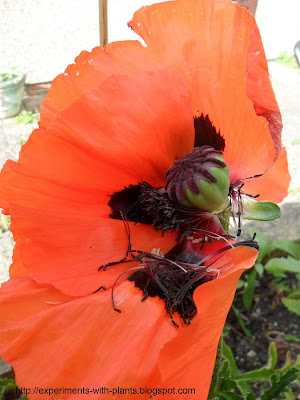 The remaining plants grown from the runt seedlings are just coming into bud now, the buds look large compared to the size of the miniature plants and the leaves are neater. As with the foxgloves,﻿ I haven't figured out yet if these are smaller because they are a different hybrid or because they were deprived as babies. Either way, enormous poppies or runts, both are welcome in my garden.
Carol Klein explains how to propogate oriental poppies by taking root cuttings :
http://www.guardian.co.uk/lifeandstyle/2010/jun/05/oriental-poppies-gardening

Oh WOW! Those are gorgeous!

Beautiful, I have poppies appearing too, perhaps I should get out with my camera and join in the poppy fun!

You are right. They are ENORMOUS and very attractive. I have a packet of seeds but I can't grow them in my country. How sad! It is not allowed. I wonder what happens if I go ahead and sow them. Maybe you'll never hear from me again. Haha!

These are enormous! How beautiful they are - they really brighten up that spot. Too bad they don't last long, especially for all the work you did. But, you've now found how to grow poppies successfully. Great lesson!

Thanks Christine, DD & Holley - Glad you liked my poppies. They don't last long, but as one poppy fades, another bud pops open. These are perennial, so they'll flower again next year and they can be divided to make more plants.

One - Please don't sow those seeds!! Everyone at Blotanical would miss you so much !

Poppies are my favorite flower, but I do not have any here at 664 currently, except in stain glass on my front door. :grin:

I tried them from seed and they never really took. I should have tried them the way you did, and will next time for sure.

Thanks Ronnie, Welcome to my blog!
- I remember seeing poppy buds in your end of April post. I often wonder if I'm just reporting stuff that gardeners know already.

Donna - I'm pretty sure the birds ate my outdoor-sown poppy seeds. The only ones they left behind were sweetpeas. Guess they don't like munching on dried peas.

Your poppies are beautiful. Mine are blooming, too in Santa Fe, NM. It awes me that we can have the same plants growing half way across the world from each other at the same time.

Those are gorgeous poppies--and how wonderful, really, not to look at your garden from an objective distance. Immersion is so much more rewarding.

Thanks Stacy, glad you like the poppies. It seems that I can't see the wood for the trees !

Hello BAG
Came across your blog while searching for info about these perennial poppies.
Keep up with your experiments!