I wrote about sedum spectabile in winter, but I appreciate them even more now than I did then, so they deserve another post ...

There were originally two sedum plants in the garden, now they are all around, filling what would have been empty spaces.  They are easy to divide and replant because their roots are relatively shallow and their succulence helps them survive till the roots establish in their new locations. Unlike some other hardy perennials, they only grow where and when you want them to; they don't produce unwanted suckers and they don't return once removed.

In winter after the leaves had shed, the dried stems and coppery flowers stayed intact despite wind, rain and snow. 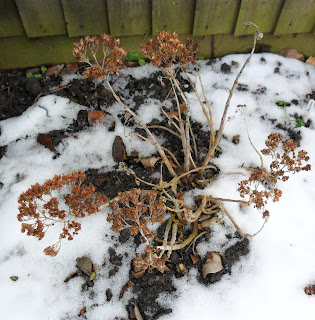 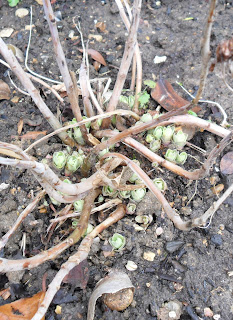 I broke off the stalks when the shoots appeared, they looked like little jade rose buds, developing quickly in early summer into compact, pin-cushion-shaped, self-supporting clumps. 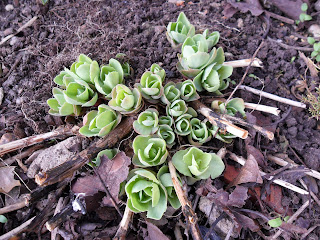 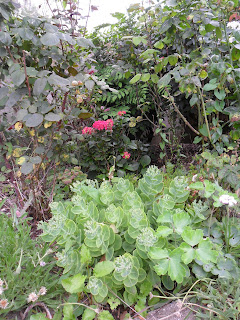 In late August, the baby-pink flowers bloomed to the delight of the pollinators.
Soon after, the leaves started to turn translucent limey-yellow, brightening up the garden even when the sun wasn't shining. 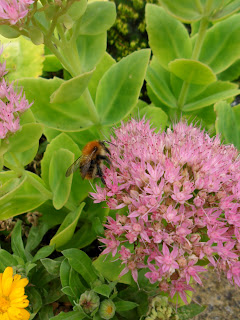 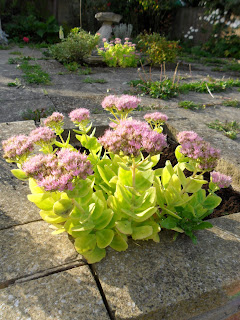 All of the photos below were taken yesterday ...
The sedum on the left lives under a bush; its leaves are bigger and darker than the other plants and it's growing horizontally searching for sunlight. The little plant on the right was a stray stem, without any roots, remaining after dividing the sedums last autumn. I just stuck it in the soil of the driest flower-bed and it stayed alive. It's ageing quicker because it's exposed to more sunshine. 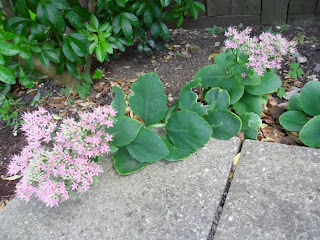 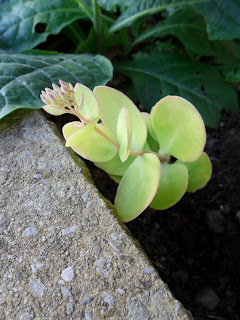 What I learnt about sedums this year is that the bigger the root-ball, the bigger and longer the stems of the herbaceous plant. Maybe that's obvious, but I didn't consider it. The photo below on the left was one of the original plants from which I split off portions of the root-ball with a fork, but I didn't take enough as the stems have grown too tall this season and are now splayed apart. On the other hand, a tiny portion produced the tiny, though perfectly-formed, plant on the right. This autumn, I'll remove the entire root-balls of the bigger plants instead of splitting off. Then they can be divided accordingly, estimating the size of next year's plants better. 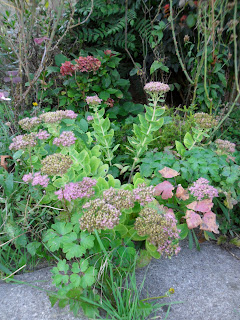 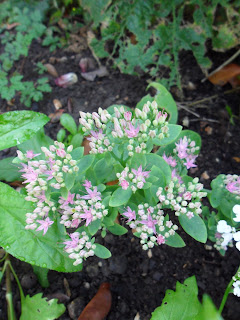 Realising that the dead-line for the GGW Photo Contest is today, several photos were taken of the view below, as the sun shone with intermittent brightness. Trying to take attention away from the weedy patio, I attempted to show three sedum clumps in one line-of-sight, the luminance of the leaves, the warmth of a late summer's day; moreover I wanted to show how much I love sedums. When the photos were loaded onto the computer, none of them looked exactly as I had envisaged and the focal points were at various depths. Editing down to twenty shots, I couldn't choose between them so this one was finally selected because it shows a ladybird which went unnoticed, a rare sight in my garden; apparently, it loves sedums too. 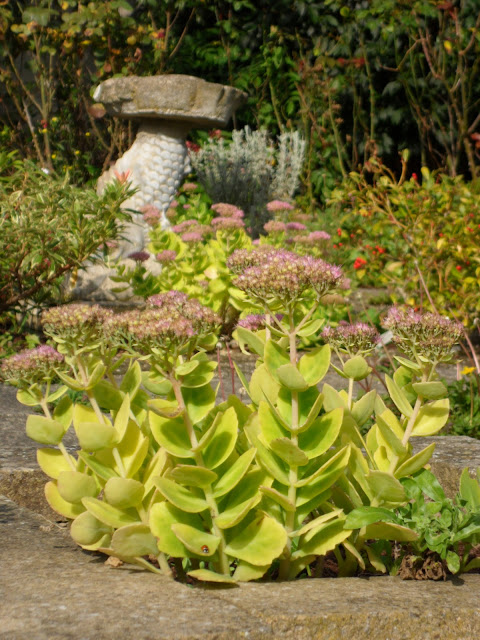 I am posting this picture for the Gardening Gone Wild Picture This Photo Contest.
The subject for this month: LATE SUMMER GARDEN.
©Copyright 2011 b-a-g. All rights reserved. Content created by b-a-g for http://experiments-with-plants.blogspot.com/2011/09/sedum-spectabile-25-sep-2011.html
Posted by b-a-g at Sunday, September 25, 2011

I love my Sedum. In fact I really love my Sedum groudcovers which are also evergreen here. Wonderful plants.
Cher Sunray Gardens

Your sedums look great growing among the rocks, like they belong there.

Great choice! I noticed the ladybug posing there. :) All the best!

Your lotus impression is up today! :)Congrats!

Good luck on your sedum photo for GGW. Sedum is such a forgiving plants and roots so easily. It looks nice between your paving. I may try that sometime.

Sedums are lovely - I particularly like the new growth in Spring and the way water droplets will sit in the leaves very prettily.

Revisiting what we have already talked about in the past is very difficult to avoid when garden blogging. I like the look of your Sedum, they sometimes get a bit leggy looking here, although the Autumn Joy has been spectacular.

Cher - I didn't know there is a groundcover variety. I'm going to investigate ...

Thanks One & Donna - Good luck with your entries too! - fantastic macros.

Thanks Carolyn - makes sense because their name translates to stone crops.

Sproutling - I like them all year round, but the buds were particular welcome in mid-winter when nothing much was happening.

Thanks Alistair - I had one leggy plant, still loved it though.

I can't say enough good things about sedums. There seems to be one for every type of garden. Spectabile is a trooper, and yours are doing really well and look great against the stone.

What a great post. I love sedums too! I hate the way you have a photograph so clearly in mind and yet can't quite get it captured. So frustrating. Thank goodness for digital photography, at least we can take loads of shots without worrying about the cost of processing them! By the way, I am a recent convert to the "Chelsea Chop" school of sedum management. Cut the plants back by half around the Chelseas Flower Show in May, and they will grow back stronger but shorter, and so won't splay out, which is the one bad habit this otherwise beautiful plant has.

PS Can I be cheeky and beg you to add a "subscribe by email" option on your blog? I'd find it so much easier to keep up with your posts that way...

Thanks Patty & Fer - I'm surprised and delighted at all the comments about the sedum/stone combination. It wasn't intentional, neither was planting three sedums in one line-of-sight, it just turned out that way.

Thanks for the tip Janet, so I wont have to uproot after all - the bigger plants will definitely be getting the Chelsea chop in May. As requested (and I'm honoured that you did) ... I have added a Follow by E-mail gadget, hope it works.

I like how the plant grew in the dry soil with little attention. It is so amazing to me how some tiny spark of life can be in a bit of plant, and how motivated it will be to grow. Lucky for us!