This photo taken at the end of April is my favourite of this year so far. I remember how in awe I was with the scene; the cherry blossoms scattered over the "woodland" garden, the bluebells were in their prime, the foxglove spires on the point of emerging ...

These are two of ten mixed hybrid foxglove excelsior plants that I raised from seedlings for an experiment on growing conditions.

The spires of the self-sufficient foxgloves in the woodland grew tall and slender while those in the sunny flower-beds were squat, they would have died without extra watering.

However, the experience and experiments were marred by my biggest (gardening) disappointment to date, the appearance of black bean aphids which preferred to suck the juice from the soft buds, stems and leaves of my precious foxgloves over any of the other plants﻿. I held back for a while hoping that ladybirds would feast on them, but they didn't so I resorted to spraying with soapy water, which worked temporarily. When the aphids returned and started to grow wings, I gave up.﻿﻿ ﻿﻿﻿﻿﻿﻿The puckered damage that they effected didn't stop the foxgloves blooming and producing seeds though.
﻿

The majority which bloomed in spring were pink, speckled with burgundy; two of the weaker seedlings which didn't look so promising to start with developed into unique specimens with white and lime-green bells. I harvested their seeds to grow second generation seedlings, still keeping them suspended in the seed-tray to persuade them to develop later and lengthen next year's foxglove-flowering-fest. 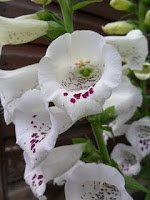 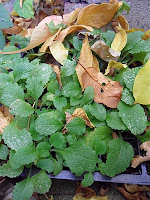 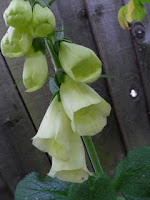 ﻿ ﻿
In March, before all the photos above were taken, I had sown more seeds from the original packet in preparation for next year's experiments. While most of the other seedlings succumbed to slug attack, the foxglove seedlings were unscathed. I moved them to a sheltered nursery patch, watering them till they settled in, then my attention was distracted by the annuals during late summer and autumn.
As that affair draws to an end, I decided that the foxgloves, which by this time were choking each other and sheltering unimaginable creepy-crawlies, could not be ignored any longer. Last week I dug up the flower-beds, thinned out the foxglove nursery and re-planted the excess all around.
﻿ ﻿ ﻿ ﻿
﻿

So there are more than enough foxglove plants, growing vigorously and suspended, to participate in whatever experiments I plan to conduct next year ...
While contemplating whether or not to rake out the fallen cherry blossom leaves from the woodland before transferring more plants from the nursery, I noticed foxglove plantlets already dispersed right up to the rear wall, children of the two plants in the top photo. According to the results of my 2011 experiment, this area is the prime location in the garden for growing foxgloves, with just the right exposure to shade dappled with sunshine. These conditions, combined with the weedy undergrowth, keep the soil consistently moist.
﻿

It struck me how similar the spacing of accidental seedlings compared to my forgotten nursery, maybe it wasn't choked after all. I wonder if foxgloves produce so many seeds intentionally, to create sacrificial plants which only exist to cover the ground and keep it moist for the reproducing ones.
The foxgloves that I raised are more mature and larger than the accidental plants. I could dig up the latter and replace them with a couple of the finest, hand-reared specimens as planned. However, in the grand scheme that might be an accident - I'll leave them be for now.
I'll be linking this post up to Donna's meme Word4Wednesday :  ACCIDENTAL.
Check out  http://gardenwalkgardentalk.com tomorrow for more Accidental posts.
©Copyright 2011 b-a-g. All rights reserved. Content created by b-a-g for http://experiments-with-plants.blogspot.com/2011/11/foxgloves-29-nov-2011.html
Posted by b-a-g at Tuesday, November 29, 2011

The lady bug was caught accidentally napping. It should be taking care of the aphids. Lovely accidental foxglove. The linky is ready.

I like your seedling experiment and conclusions. They are rather prolific as I have them in my garden too. Seedlings are everywhere and I will be curious to see what develops next year. I am surprised to read your hand reared ones were much larger. Mine were all volunteer, but the spacing seemed like they were planted. Happy accidents! Thanks for joining along.

Those are really hardy foxgloves! They do really have pretty flowers!

Thanks for this ... I am planning my garden for next year, and definitely want some foxgloves in the mix so this was really helpful for me! They're quite chunky at the bottom aren't they? I might have to give them a bit more space than I'd originally planned.

Such fun - and what a great way to really get to know a plant and its likes and dislikes. I am often amazed with what you can get away with viz. planting shade-lovers in a sunny spot etc, but this does rather confirm the woodland roots of the foxglove. Look forward to seeing next year's blooms - hopefully without the aphid infestation...

They can also be good symbols of persistence. Those accidental ones can be thinned off to give more space for the rest to grow well and healthy. If they are really so compact, that baits more disease and pests. Too much population harbors pests and diseases even for animals. Happy accidents and they are lovely even then.

I love the first photos of the foxglove about to bloom in the woodland setting - those types of scenes - when I get them right in my garden - make me so happy :)

My first foxgloves have just started flowering. I'm quite excited, but reading your post now I think I need to thin mine out. They are very crowded where they are.

I adore foxgloves they give just the right feel that I want for my garden - like you I have been transplanting the seedlings around the garden - for me, you just can't have too many.

I am so envious of your foxgloves. And the white one with the burgundy spots is just beautiful. I would leave them all and let the strongest survive!

I really enjoy your experiments. I adore foxgloves and many have survived in wet sun or dry/wet shade. I love the accidental plants...what a gift!!

Thanks One - The less said about the ladybirds the better, they really let me down ...

Thanks Donna (GWGT) - There weren't any foxgloves in this garden till I planted them last year. My hand-reared specimens were bigger because I planted seeds in March, the foxgloves produced their own seedpods in June. It might be different next year because there will be seeds left in the soil which may germinate in spring.

Thanks Malar, they are very hardy, even surviving being covered by snow. Foxgloves need to experience a period of cold weather before they flower.

Hi Di, when I thought of including foxgloves in the garden, I didn't picture the beautiful leaf rossettes. The size is quite variable, the first set of leaves gets replaced by regrowth in spring. Anyway, foxgloves don't seem to mind being moved around, they have relatively small rootballs.

Thanks Janet - There is actually a foxglove aphid in existence, but I classified mine as black bean aphids because they had matt black bodies with white legs and antenna.

Thanks Andrea, Christine & Holly - To thin? ... or not to thin? - that is the question. Not sure what to do now, even though I thinned out my nursery, I planned to leave the self-seeded plants in their natural state.

I really enjoyed your take on W4W. I had grown foxgloves once when I was a rookie gardener and was sad to see them die. Now I read your post and I see why! I had them planted in full sun and in my sandy soil, they weren't happy. Now I think I may try them again in my woodland bed.

I love the flower...they are really gorgeous.

I love foxglove-- I have to start over this year because I let all the seeds get away. Isn't it almost impossible to toss extra baby plants?

Another experiment maybe? Don't thin out the accidental seedlings. They may actually be there for a reason. Then wait and see? Another accidental thing might happen that might prove to be a lucky accident.

I would never be without foxgloves. They pop up all over the garden and I weed out the excess in the spring. They look their best in dappled shade in woodland near us.Such an elegant understated plant.

Hi Karen - Good luck with planting foxgloves in the shade. I enjoyed your accidental post too!

Hi Linnie - yes, especially when they're foxgloves. I hope I wont be weeding them out come spring-time as Janet suggests.

Janet - I would love to see a real wood filled with foxgloves ...

Glad you're thinking along the same lines Bom - I'll compare the thinned-out nursery, with the unthinned accidentals.

I recently read a book written by a gardener at a moderately well-known garden in Devon who'd been all over the world and was interested in "natural" gardens. (Sadly I can't remember the title or author or find it again in the library's catalog, so this is next to useless, but still.) The author said that one of the best things he'd learned was that in nature plants are always spaced more closely than we think they should be in gardens--that if you look at any meadow or woodland everything will be growing cheek-by-jowl. All to say, it might be interesting to let your foxgloves do their own thing, especially in that lovely woodland area.

Thanks Stacy ... for taking the time to look up the catalogue. I like the idea of a "natural" garden which shouldn't be weeded.