Last winter I took cuttings from plants in my mother's garden, the ones that I had grown up with. Some of them were in my subscious from as far back as I can remember being alive. They were transplanted in pots in my garden and fared so well through the winter that I was abnormally cocky, wondering why people bothered buying plants when it was easy to propogate cuttings. Then we experienced an unusually hot period during spring when the garden dried out and they gradually wilted and died, watering only speeded up their demise, except for one.

Here's the parent in my mother's garden at the end of October. It's a lace-cap hydrangea which has inflorescences of tiny fertile flowers (with stigmas and stamens) surrounded by infertile flowers which are collared by leaf bracts coloured like pink petals to attract insects : 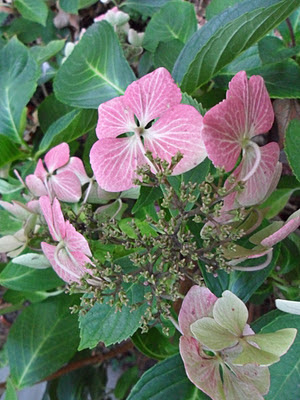 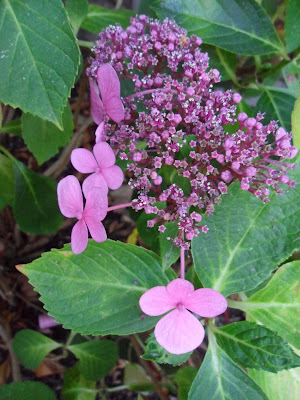 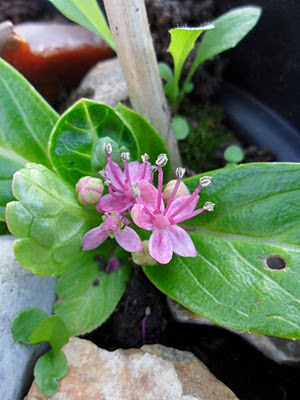 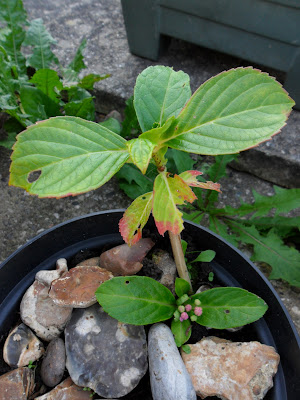 The elevation of the male pollen-coated anthers above the female stigmas is called reverse herkogamy. It's thought that some plants evolved this way to maximise precious pollen export for cross-pollination without the sticky stigma interfering or getting clogged.
Other plants have developed even further in their efforts to diversify their genes, exhibiting dichogamy, changing sex effectively to maximise both pollen export and ovule fertilisation. Pollen and ovules are protein-rich, their production expending much energy, but the plants are prepared to exert themselves as their sole aim in life is to produce as many seeds as possible.

Clerodendrum, otherwise known as mexican hydrangea, has been the highlight of my autumn garden. We have a love-hate relationship ... it grows uncontrollably, up through the patio a few feet away from the major clump and popping up on the other side of the neighbour's fence too. I cut it down to the ground last year, not bothered if I never saw its huge, sinister, foul-scented leaves again ... my feelings have softened since.

I didn't notice the intricate purple veining last year or how the heart-shaped leaves tried to woo me .... 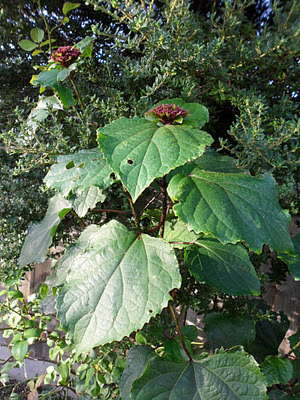 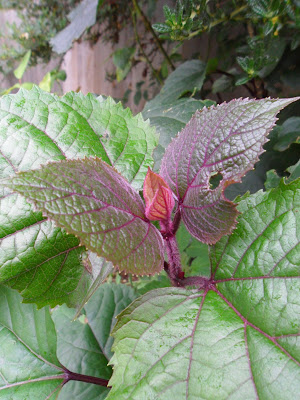 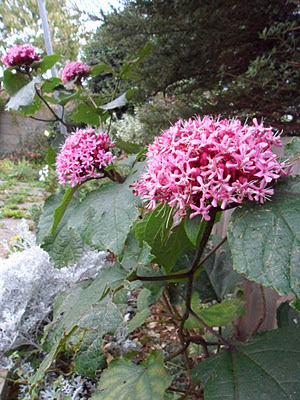 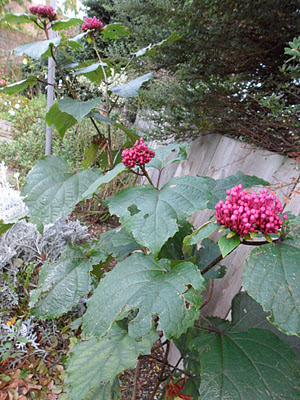 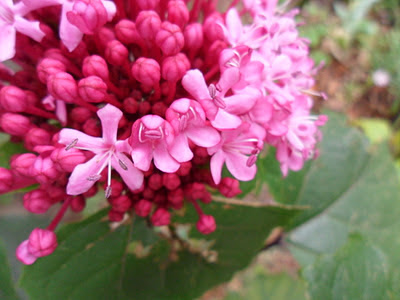 When the flowers unfurl they are gender neutral.
The white style supporting the retarded stigma looks similar to the white filaments of the stamens except it has a brown tip.
It holds back while the anthers at the ends of the stamens start to produce pollen during the male phase.
Once their work is done, the stamens bend over. 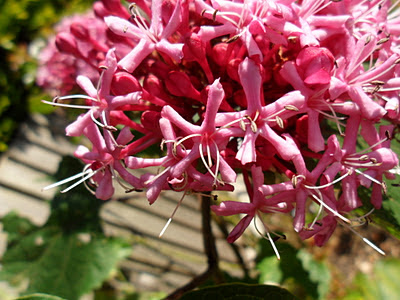 The brown-tipped style elongates as its stigma becomes more receptive during the female phase.
In the wild, ideally insects fly from one plant in its male phase to another in its female phase, cross-pollinating them. Some seeds may inherit the weakest characteristics of their parents, some the best.
However, evolution has stopped in my garden as there is just a solitary plant.

As I examined how its flowers progressed through their phases, I sniffed a surprisingly sweet scent considering the odour its leaves emitted. Maybe I wont cut it right back.
This week I decided to share the link to my blog with someone from the real world.
At first I kept the blog a secret, I started talking about it in January but I didn't want to share it for fear of getting writer's block. I was amused at the first comment of feedback :
(1) it sounds like I was suicidal until I discovered gardening
(2) no wonder I spend such a long time writing posts
(3) the interaction of the blogging community is lovely


Pollination of inflorescences :
Botany : an introduction to plant biology   By James D. Mauseth

﻿I'm not the only one who thinks that Clerodendrums are invasive :
http://www.ehow.com/how_12044520_kill-mexican-hydrangeas.html
I'll be linking this post to  :

I can not pick your post on Blotanical and this is a good one too. I always take root cuttings by layering the stems and have never had it not true to the parent. This was an oddity, but I did not take a air cutting like you did.

That's what 'same but different' means...I see. Good one. Actually I also expect cuttings to turn out the same. I had thought only the seeds are genetically different. Interesting! Beautiful flowers.

Well, those of us that purchase plants kill some, too, so I think you've done well on your propagating. I wonder if the flowers are a little different because of the stress they've been under, and the fact that it's fall. It will be interesting to see what they are like this next spring. The comment feedback you got was interesting. I laughed at the first, the second I understand because your posts are very good, and the third was sweet. Aren't you glad you finally shared?

Fascinating. I have never tried to propagate from a parent. These resources and your blog will help when I do attempt it...so glad you do take time to write these important posts...and I hope you are glad you shared your blog...you can see it was well received...

Thanks Giga - Maybe I should stop analysing the flowers and just enjoy them.

Thanks Donna GWGT & One - As Holly points out, maybe it's just a matter of time before the cutting flowers like its parent. I think the number of fertile buds in the cluster may determine whether the plant produces extra infertile flowers to attract insects.

Thanks Holly & Donna GEV - It was inevitable that I had to share my blog because it takes up a lot of time. People have noticed that I'm a bit distracted these days, especially when I try to have telephone conversations while blogging simultaneously.

This is one of those read, write and remember posts b-a-g. Phew! In depth info on the sexuality of plants which always seems to evaporate when I try to grasp it. Guess I'm wooed by looks and how could you not love the Mexican hydrangea? If I had a garden would give Clerodendron trichotomum var fargesii a try.
p.s. you've a natural talent for propagation and only need to get the hang of irrigation ;)

Very informative post about a species which is sometimes underrated. Great work!

Preculiar, I thought by taking cutings one were secrure to have the same outcome.. Lovely flowers though :)

Hi Laura - Your suggestion of Clerodendron trichotomum is tempting with its blue berries, but if I had to pick another it would have to be my namesake Bagflower, Clerodendron thomsoniae.

Thanks Martin - I certainly underrated my clerodendron to start with. I'm fascinated by it now.

Mia - it is peculiar, I'm pretty sure that I didn't get the cuttings mixed up.

At first I didn't know what you meant about sharing your blog with the real world. I guess I don't make any distinction between the two because my customers are all reading my blog and they are definitely real. However, I was sad to learn that I belonged to your fake world :-(. Perhaps you should let slip your real name and even post a photo :-). It's all real.

Carolyn - For me, this is a virtual world (not a fake one). Like my garden, it's a place to escape to. I'll try and explain more in my next post.

Hi bag,
I featured the mophead hydrangea today, but to be quite honest I do prefer the lacecaps. Very interesting details on the Clerodendrum. You had me checking this one on wikipedia as I am not familiar at all with it. I see your one Bungei is tender so not likely to flower in Aberdeen. I was looking forward to telling you that some of the clerodendrums are commonly named after your good self, I might have guessed you already know. alistair

That's beautiful collection of flowering plant! You have done a very detail study of plants!

I'm bookmarking this so that I can come back to it and read it again, great post. It's funny how some plants sneak in to your affections after you have decided they need to go. Congrats on having a cutting survive and flower, once we have moved I will be on a mission to learn how to take cuttings, I seem to be really bad at it, despite having not one but two really good books on the subject...

How interesting that the cutting of the Hydrangea turned out to be different!

Hi Alastair - Until I prepared for this post, I didn't realise that the flowers of mopheads are all infertile.

Thanks Malar, The more I study about plants, the more I wonder if the single specimens in my garden feel lonely.

Thanks Janet, I followed this method last winter after the buds started to show :
http://www.gardenersworld.com/how-to/projects/hardwood-cuttings/

I love hydrangeas. I think your clerodendrum is lovely and deserves a place in your garden. Heat can be tough on hydrangeas, even if you keep them well watered. I admire your efforts at propagation. The few attempts I have made have had limited success. I like plants that propagate themselves, so all I have to do is transplant the babies to the new location.

I understand the "keeping secret" thing - I did that too. And once I shared it, it gave my family who live overeas just joy to "watch my garden grow".

Your Hydrangeas are fabulous - I'm going to try propogate mine.

Oh, what an interesting post, b-a-g--I had no idea flowers were so canny about reproducing. I don't blame you for softening toward the Mexican hydrangea, despite its occasional waywardness. With veins and coloring like that, clearly it means well.

I think the interaction is what makes blogging so much fun--such giving people, all excited by something and wanting to share it.

b_a_g, this is a lovely and informative post. Although I know about these things in general, I don't know the details of our Clerodendrum, which is a different species than yours. It is growing in our wild thickets but i love seeing it in the garden being frequented by butterflies. I noticed it produced lots of seeds, but havent really checked on the flower morphology and timing of receptivity. I've planted some seeds from the wild in pots, and my mother complained because it gets invasive. However, it is already there, i hope my home visits will be timely for its flowers, so i can also observe them the way you did. Thanks.

Thanks Deb - I like those too. Polyanthus is my favourite, baby plants just keep popping out.

Thanks Christine - Good luck with your propogating experiment.

Thanks Stacy - I had no choice but to love the mexican hydrangea, only chemical warfare would get rid of it.

Thanks Andrea - When I tried to read up on this subject, there were so many botanical terms that I didn't understand. Observing the plant in my garden motivated me to persevere.