So much for being smug about the mild winter in the UK ...  On Sunday it was freezing in the spots where the sun wasn't shining. Quite in contrast to a month ago, there weren't enough blooms to justify a Garden Bloggers' Bloom Day post.

These photos of foxglove plantlets in different parts of the garden were all snapped at lunch-time :


I was supposed to be taking advantage of the few daylight hours available during the weekend to do some gardening. My main gardening activites in order of priority are : transplanting, weeding, mowing the lawn and pruning, but none of these needed to be done urgently. Inactivities are : thinking about things that I don't think about anywhere else, checking every detail of each individual plant and planning for the future. 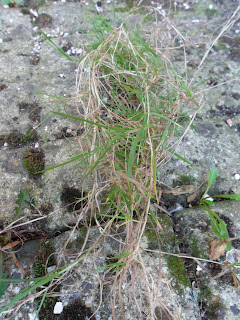 The grass family includes lawn grass, ornamental grass and the major cereal crops such as wheat. Despite their simple appearance they are highly evolved plants equipped to reproduce against all odds. Their seeds are not supposed to be dried, milled, mixed with water and yeast, fried in oil, coated in sugar and injected with raspberry-flavoured jam  ... or even nibbled straight off the stalks by mice.

Grasses have developed toxins to defend their seeds from creatures that try to digest them instead of facilitating transit to a new location. Rodents (labelled as granivores) have in turn evolved to bite back, their relatively large guts capicitate longer grain fermentation so that nutrients can be extracted. On the other hand humans, slower to evolve, can't stomach uncooked grains which led to the discovery that cooking releases extra energy in the form of carbohydrates. So much energy in fact, that they don't need to spend all day eating along with the rest of the animal kingdom, allowing time to focus on building communities.

Scientists are confused on whether man is naturally a herbivore or omnivore. Different blood types and smaller jaws which can no longer neatly accommodate our teeth, suggest there were changes. Chimpanzees, our closest relatives, were discovered to be hunter-gatherers; hunting also being a means for males to gain power, meat only accounts for 2% of their diet. Nevertheless, cultivating, cooking and consuming grains in moderation was probably a major contributor to the transformation of the Old Stone Age (Paleolithic) hunter-gatherer into the more civilised New Stone Age (Neolithic) farmer ... but was this the rise of the human species before the fall?
Over-consumption especially since the industrial revolution has led to increasing levels of coeliac disease, diabetes and other maladies initiated by high blood sugar levels.  Even though the British government recommends that a healthy, balanced meal should contain one third carbohydrates, there is an increasing trend harking back to those Old Stone Age times, to eliminate grains. Dieters are left with that unsatiated feeling only too familiar to our Paleolithic ancestors.

Maybe the grasses are winning after all :

Introduction to the Paleolithic Diet :
http://www.earth360.com/diet_paleodiet_balzer.html

The late role of grains and legumes in the human diet, and biochemical evidence of their evolutionary discordance :
http://www.beyondveg.com/cordain-l/grains-leg/grains-legumes-1a.shtml

Wow, this is a very informative post and very well summarized. That timeline can be a very good reference for us. I am a carbohydrate addict, being Asian where rice is our staple food. And diabetes rate in this country is very steep, I know very well what it entails, yet I am still eating a lot, so I admit i am an addict. I hope i can do something with the withdrawal symptoms, LOL. But you are very right about the grasses, and they are normally the fastest species to colonize an area.

Sitting on the back doorstep with coffee is the highest form of gardening...

I'm still mulling over all the info about grasses from your post and the links you've included. Having seen the low fat diets, the good fat diets, the high carb diets, and the no-carb diets all become the one and only answer to human health based on scientific evidence and then fall into disfavor, I'm inclined just to come down on the side of moderation...

This is an incredibly well researched and informative post. I enjoyed the evolutionary, linear progression the path grains took through time from seed to table. And how the rodents adapted and evolved to make use of the grains. I too am surprised scientists are questioning our classification of being a natural herbivore partially based on physiological traits. Farming vs. gathering, a very interesting subject to study. Intersesting post.

B-a-g,you always fascinate and entertain me, would I be right in thinking that the event which took place 209 years ago was the one which did it for you.

Interesting that diabetes was referred to over 3500 years ago! I'll be taking a harder look at those grains on my plate, but I have to admit, a doughnut sounds divine!

An interesting mind you have b-a-g, I like the way that grass and a jammy doughnut lead you to contemplate the role of grains in our diet. I remember studying the history of wheat and the first of the natural hybridisations that led to bigger grains which gatherers quickly spotted and exploited. Balance and moderation are my idea of a healthy diet - as wholegrains or simply sucking on the end of a long juicy stalk of grass. Jam is optional!

Thanks Andrea & Holley - Glad you appreciated the time-line. I get so confused with historical dates, hopefully they're accurate +or- a few million years.

Thanks Donna - I developed an interest in evolution after researching for your W4W meme on the subject.

Thanks Stacy & Laura - Indeed moderation is the key. I read that it's possible to lose a stone in a year if one eats just two biscuits less a day.

Thanks Alastair - You guessed correctly! Compiling the time-line made me realise how insignificant we are in the grand scheme.

Fascinating..if I don't eliminate grains I have to make sure I am gluten free...so much just does not sit well in my body

Wow! You have done a very good analysis!

I am happy you "took advantage of the few daylight hours" to ponder. Thank you for a very well thought-out post. It was very interesting, indeed.

Hi b-a-g, I think one of the major pluses about gardening is the excuse to be outside and contemplate all manner of things not at all related to gardening and plants under the guise of working. I've never quite worked out what I think about the whole should we shouldn't we eat wheat etc., I tend to subscribe to the "everything in moderation" view, but I do love the way that the rodents countered the grain toxins by developing larger guts. Gotta love evolution!

You actually make it seem so easy with your presentation but I find this matter to be actually something which I think I would never understand. It seems too complicated and very broad for me. I'm looking forward for your next post, I'll try to get the hang of it!

So much diabetes? Thought provoking b.a.g.

Donna - Luckily, there are quite a few gluten-free options these days.

Carolyn - Unfortunately, I have to agree.

Malar, Linnie, Debra, Catharine & Anon - It's a very complicated subject, so much is still unknown and never will be. I'm sure I over-simplified it and missed out important information. I just wanted to share what I found on the internet when I asked myself the question: "Are plants really inferior to humans?"