The Aztecs believed that cempoalxochitls were magical. They scattered paths of the vibrant flowers from altars into their houses to guide home the spirits of those who had passed away and added the dried plants to their smoking concoctions to envisage the future. This property may explain why their botanical name is Tagetes, named after the Roman prophet Tages.

Spanish explorers brought them from Mexico to Europe in the 16th century. It’s not clear why these plants were called marigolds, though it has been speculated : Mary’s Gold after the Virgin Mary.


A native marigold with botanical name Calendula already existed in Europe, noted by the Romans to flower all year round. It had medicinal properties and was also used as a yellow food dye by adding dried petals directly to the cooking pot or indirectly by feeding flowers to chickens to intensify the yellowness of their egg yolks.


Gourmets label dried marigold petals as poor man’s saffron compared to the authentic strands of crocus stigmas. In spring when the crocuses were in bloom, I mentioned my nostalgic obsession with this colour. As far as I’m concerned they were just the appetiser; marigolds are the main course.

Even though my pot marigolds are not the magical, Mexican variety and though I’m not supposed to believe in magic being a scientist, they seem to have cast a spell on me during the past few rainy months. So here I am also gazing at hollyhocks, hydrangeas, agapanthus and corn flowers but find myself writing down marigolds as the July entry in my Dozen for Diana.


There were no marigolds in the garden of my childhood. My mother favoured pinks, reds, blues and purples, the bigger and fancier the better, always doubles over singles. I preferred the daises. Marigolds were the first seeds that germinated for me when I started working on my own garden, just a couple of weeks after they were planted. I fell in love at first sight of the lettuce-green leaves, then the flowers. Since the first planting, they have self-seeded and somehow made themselves unattractive to slugs and snails which seem to be gorging on everything else. Marigolds remind me not to forget what comes easily when I'm faced with challenges.


If you asked me my favourite colour, I would probably choose purple one day, blue the next. It would never occur to me to select yellowy-orange, but that’s the colour that lifts my spirit, it triggers my psyche to believe that anything is possible.


That makes marigolds magical to me.

Caution : Pot marigolds (calendula officinalis) are edible in moderation but ornamental marigold hybrids might not be. Please check the seed packet.


Fay shows us how to preserve poor man’s saffron :
http://orkneyflowers.blogspot.co.uk/2011/09/poor-lasses-saffron-calendula.html

Thank-you very much to Malar for nominating me for a Versatile Blogger Award.
I enjoy reading about her tropical plants. Unfortunately, the monkeys stole her mangoes… http://myemeraldgarden.blogspot.co.uk/2011/09/gone.html

Email ThisBlogThis!Share to TwitterShare to FacebookShare to Pinterest
Labels: Dozen for Diana, marigolds

In April, I lamented that lupin aphids had attacked one of my plants. The infestation wasn’t obvious at first sight, they were only discovered when the leaves were parted to check for buds. Disappointed to discover new life of a different sort, I thought that if the leaves were cut down to the ground, the lupin might resurrect by drawing energy from special storage sacs in its roots usually saved to attract microbes which exchange nitrogen fertiliser for carbs. There was a glimmer of hope initially when tiny leaves poked out amongst the severed stalks but they soon withered away and all that's left now is a brown, soggy patch.

There were two more lupins a couple of meters away which were not affected at the time. I debated whether to cut those down too, just in case to protect the surrounding plants, finally deciding not to. Surely enough the same fat, jade aphids made an appearance in May, braver this time, crawling over the spoked leaves and conical buds. 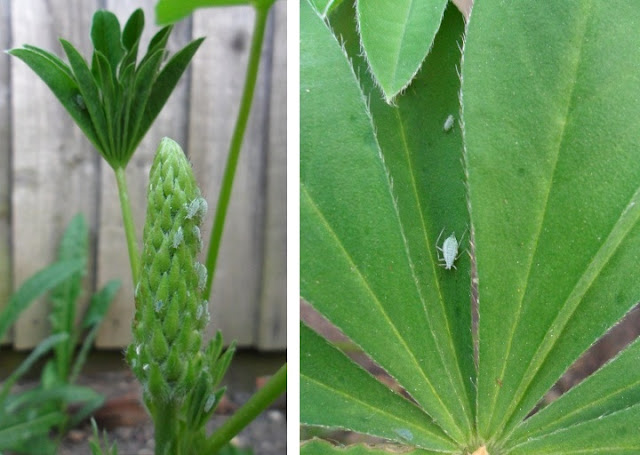 I counted those plants as lost, not even bothering to spray them with water.  However, the non-stop summer rain must have washed them away because in June the lupins started to flower continuously as I pruned off each flower stalk before it set seed.


I rejoiced prematurely at what seemed to be a happy ending.

At first I wasn’t sure what was happening, the bottom florets of the lupins looked slimy and chewed, but it wasn’t clear what the culprit was until a trail of excrement suggested that the creature was bigger than an aphid.  Evidently, the rain which has washed the aphids away has also bloated up the snail population. They’re everywhere, not even hiding behind pots and under leaves in the day-time, but out there stretching themselves, soaking up the moisture, and munching my lupins sloppily. Not really annoyed, more curious, I wondered why a snail would put itself in a vulnerable position by climbing up a lupin stalk when lush vegetation lies abundant below.

If I chose to give the snails the benefit of the doubt ...

Malachophily or snail pollination syndrome is when a flowering plant develops traits, as it evolves, which make it attractive to snails with the intent that it will form a mutually beneficial relationship with them. Arum lilies are given as an example, they exude a primitive scent of rotting carrion to attract flies and beetles. I suppose that snails, not averse to a rat dropping or two, wouldn't deflect their tentacles at an arum.

However, I question if this word exists because not all dictionaries list it; it’s not even included in Wikipedia.

On the other hand it is well documented :
Sweet lupins with lower-levels of poisonous lupinine have been specially bred for the livestock industry as lupin seeds contain almost as much protein as soyabeans.
(More worryingly ....)
The body-building supplement Arginine was first isolated from a lupin seedling extract. 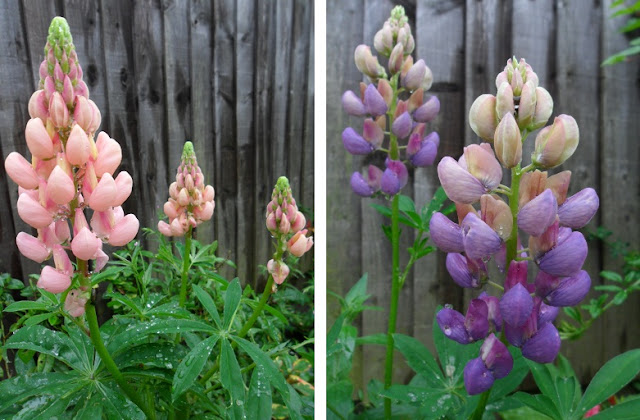 Maybe this is the end of the story, maybe not ...


Beautiful photo of a snail on an arum lily (unfortunately the snails in my garden aren't so cute) :
http://fineartamerica.com/featured/snail-lily-jake-johnson.html


Please visit Carol's MayDreamsGardens blog on the 15th of every month to see what's blooming in gardens around the world.

I should probably start this post by whispering a couple of disclaimers :
I'm not really a scientist.
I am not qualified to write about environmental issues (… or gardening).

The other day I was mingling with some wild foxgloves outside a church situated by a dual-carriageway, begrudgingly noting that despite the incessant traffic whizzing past they looked happier than the beloved specimens in the sanctuary of my back garden. I wondered if it could be possible that a consequence of man-made carbon dioxide (CO2) emissions is that plants grow better because they need this gas to photosynthesise.

It turned out that my thought was not so far-fetched ...


Scientists have predicted that previously CO2-starved plants in African savannahs and the creatures that have evolved with them could be replaced by forests by 2100 as a result of fertilisation from post-industrial CO2 concentrations. In the carbon cycle which facilitates life on earth, forests are a sink draining heat-trapping carbon dioxide from the atmosphere, animal and plants respiring during life and decaying after death give it back.

There is a counterpoint though because scientists also predict that in the presence of higher than normal CO2 levels in the atmosphere, forests are expected to draw less water from the soil allowing more microbes to flourish which release CO2 as well as more potent gases, methane and nitrous oxide.

Something that I learnt after entering the world of work, that I was blissfully unaware of when I was at school, is that there is no right answer. In the real world, you can't sneak a peek in the back of the book, because the back of the book is a volume in itself if you take into account all the possible consequences of an action. Even then, failure mode avoidance strategies and risk assessments only address the consequences that we understand or have an inkling of.


Before the industrial revolution, agriculture was the main source of excess CO2 emissions. Deforestation, tilling fields, even digging your garden, effectively increase the surface area of exposed soil; trapped carbon reacts with oxygen in the air and gases off. No-till farming has been put forward by its supporters as a way that farmers can not only help reduce agricultural CO2 emissions but go further to balance man-made emissions by sequestering carbon from the atmosphere in their fields. Others argue that no-till farming just changes the distribution of carbon in the depth of soil and it can’t be used to claim carbon offsets.

Recently I stopped digging my flowerbeds because I didn’t want to disturb spring and summer bulbs or dormant over-wintering perennial roots, just pricking the soil to remove weeds with roots intact. However, when I uncovered a patch of earth under my patio in March, my instant reaction was to dig as deep as I could and turn the soil because that’s what I’ve seen gardeners do. During this process I unintentionally sliced several worms which were probably doing a better job at churning up the soil and the moisture held in the soil evaporated taking a while to recover. I was left aching, questioning why it was necessary for me to dig when mother nature doesn’t.

Holley mulched her new flower bed instead of digging it up :
http://dreamingofroses.blogspot.co.uk/2012/07/what-happened-yesterday.html


I would like to thank Helene at Graphicality for nominating me for the One Lovely Blog Award. She has one too, here is my favourite post :
http://graphicality-uk.blogspot.co.uk/2012/04/make-your-own-bonsai-trees.html