There are flies in my garden ... 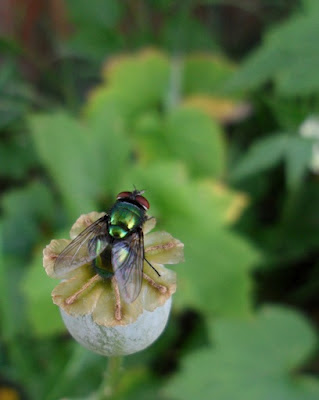 but no butterflies unfortunately. I could leave out a pail of milk as that's how they got their name ... unlikely to help though as I haven't seen caterpillars either.

Caterpillars are supposed to like thistles, holly and ivy amongst others, in an undisturbed piece of land where they have a chance to survive a full life cycle.


I find this difficult to believe unless caterpillars find masachistic pleasure in being pierced. Thistles and ivy abound in a neglected patch beside my Mum's shed and holly thrives in the woodland area of my own garden, yet caterpillars are non-existent.

To be more accurate, I've never seen a colourful butterfly in these gardens, just the occasional cabbage white and those small moths that eat your clothes. Color is camouflage, heat absorbant, attractive to the opposite sex and a warning to predators which makes me wonder why cabbage whites are so plain.

Well, I thought they were cabbage whites, until I checked butterfly web-sites this week and discovered that they were actually small whites (moths in the US) or possibly white pinion moths. Moths are in the same family as butterflies with thicker and hairier bodies. They are more easily identified by the way they hold their wings flat against their body as they rest, while butterflies hold their wings vertically.

It was just a whim before, but recently graphic photos in other blogs have whet my appetite. Eg.http://thesagebutterfly.blogspot.co.uk/2012/08/my-garden-notebook-august-2012.html

I need butterflies in my garden. If a can't have butterflies, I wouldn't complain if I just had some hummingbirds.
( Fantasy Plant #2 : Monarda because I've never seen a picture of one without a hummingbird attached.
http://gardenwalkgardentalk.com/2011/07/07/the-monarda-speaks/ )


For the past couple of years I've planted mixed annual seedlings indiscriminitely around the garden, which gave me a good excuse to stop weeding as every new plant was potentially desirable. One sprout had a tiny purple tuft of a flower, which wasn't the prettiest thing I'd seen; I gave it the benefit of the doubt. However, it didn't die down in winter as you would expect an annual to. Never known a plant to grow so quickly, the stem has thickened into a self-supporting cane within a year.  My central flower bed isn't exactly the ideal location for this plant to show itself off.

It was only this summer that it dawned on me that this plant might not be spawned from the packet of annual seeds. I was taking photos of the hollyhocks against the garden fence, when I saw a familiar purpleness suspended above them, gently swaying in the breeze.


Later, I walked down my street and there it was again.

So now there is a baby one approximately half-way between these two mature butterfly bushes, buddelia.

They have a reputation of growing on wasteland as they thrive in well-drained soil with a high chalk content which not many plants can tolerate, probably considered invasive.

I guess the baby butterfly plant should be relocated before it makes itself at home. My bare, bone-dry border would test its robustness. As it grows, the bowed stems might offer some shade and sustain moisture in the soil for caterpillar-friendly understory plants. Hopefully, it wont be long before butterflies flutter in between the purple panicles.

04AUG2012 - After this post was published, Kate commented that my baby butterfly bush is agastache not buddelia - no wonder I don't have any butterflies!

I do hope, b_a_g, that you see butterflies in your garden soon. The numeroua 'flying flowers' that visit my garden are such a joy. There is no doubt my three buddleia plants, among other butterfly magnets, entice them here. Although buddleia is invasive in some areas, I would hate to part with mine.

Your baby butterfly bush is an Agastache. The leaves of Buddleia are more silvery. Not to be a know-it-all, but I do grow both of them! Bumble bees love them, not sure about the butterflies, though. Good luck in you quest for colorful butterflies!

Pam - "Flying flowers" I love that!

Thanks for correcting me Kate - I have just checked agastache images in Google... so much for my plant identification skills. No wonder I don't have any butterflies! I just jumped to the conclusion after seeing the two big buddelia bushes - very unscientific.

There are some dwarf buddleia varieties available these days. Although I purchased one a few years ago, and it brings a new meaning to the word dwarf. Still, it does attract the butterflies.

Thanks for mentioning GWGT and the Monarda. You are right about it attracting hummingbirds. There were some in the garden today feeding. If it makes you feel better, my butterfly bush attracts many pollinators, but few pretty butterflies, except for the plain cabbage white.

What a wonderful surprise - a hardy new member in the garden AND one that attracts butterflies. The color is stunning too ... :)

B-A-G that agastache is a native here and a pollinator magnet including butterflies. It likes sun and drier conditions. I ripped out my butterfly bushes because as you surmised they are invasive here and did not attract butterflies. Instead the rudbeckias, echinaceas, milkweed, asters, goldenrod, Joe Pye and so many others attract the butterflies. I have even seen hummers drinking the nectar from the echinacea. Not sure if I could ever ship you plants or seeds but if I it is allowed, I'd be happy to.

I wonder why you don't have any butterflies. Are they in your neighborhood at all? I have had two different butterfly bushes. One was a true butterfly magnet. The other never, ever had a butterfly on it. The butterflies would fly past it! Good luck in your quest for attracting butterflies. They really are worth planting for!

Catterpillars are very specific to their host plants, although many butterflies can share with nectar plants. In contrast to yours, we have a lot of butterflies in our little garden. I am a bit worried because their favorite is the blue Duranta erecta flowers, and i saw lots of them this morning despite the rain. Then i prune the duranta, and wonder where the butterflies went. After finishing prunning, i ate avocados with just sugar on the slices. To my amazement, 3 butterflies came in the verandah and took part in tasting the avocado and sugar. I stopped and took photos. I saw many species today. I am so glad, but this is just the beginning of the butterfly season.

Ah well b-a-g at least butterflies also like Agastache. Very often Buddleia are at their very best in September in Aberdeen and I have often seen many red admitals on them. I have to nominate you for the most informative piece of information this year, I bet I am not the only one who did not know that the Butterfly got its name from --- a pail of milk! (Just fabulous) This is the only sort of information my tiny brain holds on to these days.

I have a garden full of pollinator friendly flowers, lots of bees, few butterflies. I have been growing them for years. I also have ivy and nettles. However, I suspect part of the problem, aside from the weather, is the lack of similar floral gardens in my neighbourhood. We need to create wildlife corridors. One pollinator friendly garden out of say 10 wont work :(

I've always thought Agastache also attract butterflies but buddleias are even better in doing so. So many nice types and varieties of butterfly bush out there, you'll be spoilt for choice :)

I also have lots of butterfly friendly plants, but no butterflies. The only time I've managed to get any butterflies is when I planted borage, which the caterpillars devored in the spring. Maybe more caterpillar food is needed.

Thanks all for your comments:

Crystal - I can't imagine a buddelia without its long swaying canes.

Donna GWGT - I thought my overgrown broccoli plants from last year might at least attract some cabbage whites but unfortunately not.

Donna GEV - That's very kind of you to offer. I'm sure the seeds are available in the UK, I just have to get round to sourcing them. I'll keep your list of suggestions in mind, coincidentally, I planted echinacea seeds this year.

Holly & Helen - Yes I think it is a problem with the neighbourhood because I haven't seen butterflies on my walkabouts either.

Andrea - I wouldn't mind sharing my breakfast with a butterfly. I believe what you say about caterpillars specific to host plants. It's a bit like lupin aphids, each of my lupins got infected with them at different times but none of the other plants did. I don't even know where they came from as there are no other lupins around as far as the eye can see.

Alistair - Thanks! Hope I'm not quoting a myth.
http://www.learnaboutbutterflies.com/Butterfly%20Facts.htm

Thanks Mark & Gaz - So there is some hope after all!

Thanks for the tip Hortoholic. My Mum has borage growing like a weed in her garden. Question is : do I want butterflies enough to introduce borage into my garden ?