The problem with blue flowers is that they could just as well be called lilac or purple. Not that there's anything wrong with those colours; it's just a case of what's elusive being more desirable.
Agapanthus and corn flowers are as blue as it gets in my garden this year.

Hence ...
Fantasy Plant #4 : Bavarian Gentians for their true blueness, imagined since I was a school-child sitting in an English Literature class.

Not every man has gentians in his house
in Soft September, at slow, Sad Michaelmas.

Bavarian gentians, big and dark, only dark
darkening the daytime torchlike with the smoking blueness of Pluto's gloom,
ribbed and torchlike, with their blaze of darkness spread blue
down flattening into points, flattened under the sweep of white day
torch-flower of the blue-smoking darkness, Pluto's dark-blue daze,
black lamps from the halls of Dis, burning dark blue,
giving off darkness, blue darkness, as Demeter's pale lamps give off light,
lead me then, lead me the way.

Reach me a gentian, give me a torch
let me guide myself with the blue, forked torch of this flower
down the darker and darker stairs, where blue is darkened on blueness.
even where Persephone goes, just now, from the frosted September
to the sightless realm where darkness was awake upon the dark
and Persephone herself is but a voice
or a darkness invisible enfolded in the deeper dark
of the arms Plutonic, and pierced with the passion of dense gloom,
among the splendor of torches of darkness, shedding darkness on the
lost bride and groom.

Last year I put forward my deep purpley-blue primula as the next best thing. I didn't guess that there would be an opportunity to mention this poem again ...

A lady at work advised me to take time out to grieve properly for the loss of my Mum or it would catch up on me eventually. Gardening has helped a lot in this respect as it was a passion that she passed on. I had the idea of dedicating a patch in my garden as a memorial, to focus my thoughts, and with that in mind went plant-shopping.

Larger plants would make a bold statement but they didn't seem appropriate. 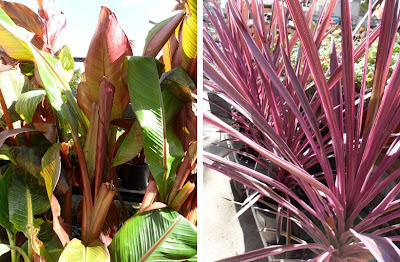 Then I came across them, there was no mistaking the colour, and I almost had to look away when I read the label.
What are you supposed to do when you come within reaching distance of a fantasy plant ?
I couldn't possibly buy it ... could I ? 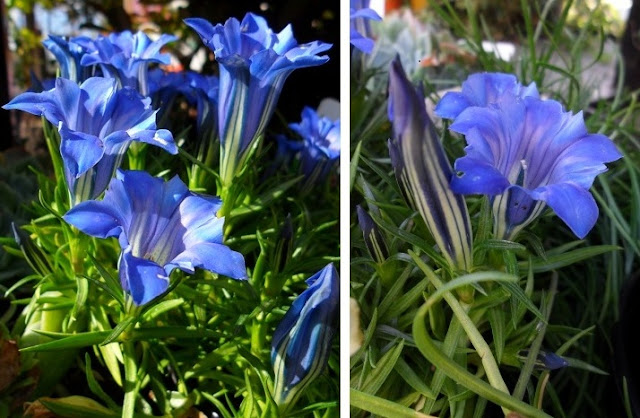 I decided not to.


Instead, I made a routine visit to the sick-plant shelf to distract myself but was delighted to find a tired-looking, pot-bound specimen of the same, just waiting for me to rescue it.
My Mum would have been proud as she had a keen eye for a bargain.

Splitting it into four revealed several tiny, blanched shoots. The most promising quarter was planted at the forefront of the "woodland" between a fading hydrangea and spent rhubarb, where it has the choice to reach foward to bask in the sunshine or spread behind into the shade. I hope it does the latter so that its relative brightness can light up the woodland floor just like in the poem.

On that point, I have to admit that after imagining gentians in my head (their form and colour) for a long time, I was disappointed when I finally googled images last year to find that even though they were definitely blue, they were not as dark as D.H. Lawrence suggests. Some photos show darker flowers than mine though. Having said that, my newly acquired gentian is, thankfully, a hybrid, so Bavarian Gentians can remain a fantasy somewhere between royal and (closer to) navy blue for a while longer.

And the memorial ?
In fact my whole garden will be a memorial as scattered around are cuttings and seedlings which she presented or which I took without asking in most cases.
﻿

An endearing blog entry b-a-g. Your mum would be proud of what you have done in the garden. And good to hear too that gardening has helped, in more ways than one.

I have sown some Gentiana acaulis seeds, so fingers crossed for our Gentians :)

Now I remember you writing about harvesting cuttings, or seedlings, from The Apple Tree. That delight in deep true blue is what I felt when I found growing the Karoo violets, I saw and longed for in my wildflower book. Such a tiny plant, I almost missed it. But it is our Gentian.

I have Gentian in my garden and the blue is electric. It blooms a long time too.

Bag, I am so sorry to hear about the death of your mother. Maybe you mentioned this before but I must have missed the post. My father, aunt, and uncle were all important gardening influences in my life. It is wonderful but bittersweet to remember them by the plants they gave me.

Hi, b-a-g. For the true navy blue gentian, you need the spring-flowering g.acaulis. Electric blue is g.verna (also spring). The autumn-flowering species are slightly lighter, but still beautiful. And you only need one, because they split very easily in May. Make sure you have an acid, light, peaty soil though....(not g.verna, which likes limestone)

Gentians have been on my list, and your lovely images have boosted them up in line. Blue in the garden is so special. So are cherished plants from mothers' gardens-- I have some too.

Gardening has a way of letting us grieve and allow the emotions flow with the memories...it continues to bring me solace. I agree with your co-worker as I did not give myself time when I lost my dad. I also have many plants I have planted in memory of those I have lost and I love seeing them bloom every year. They bring me a wave of delight and wonderful memories. I love that you have plants from your mum's garden...how wonderful! I love the pics of the Bavarian gentians...they are a gorgeous blue.

b-a-g, your love of gardening and the way your garden is full of cuttings and plants that your Mum gave you (with or without her knowledge) is the perfect memorial. I am so sorry you have had such a bereavement, I've not been reading many blogs recently so I missed your news. I hope gardening both helps you feel close to her and eases your pain.

The pot-bound gentian was indeed waiting for you to rescue it. Looking forward to the photos when it blooms.
Sorry to hear about your mum. Hope the garden helps you to grieve. I find it helps me, having lost my dad recently.

I remember the apple tree seedlings b-a-g and I will look forward to seeing pictures of your Gentian next year.

I can imagine your mom would be pleased with your rescued gentians. I hope they do well! The color is amazing.

Thanks all for your kind comments.

Looking forward to seeing your blue flowers too!