Sometimes a gardener just has to indulge themselves ...
Rudbeckia and Echinacea are in the same tribe as sunflowers but there's something about the way they push their centres forwards and pull their petals back (hence their common name coneflowers) which makes them more attractive than sunflowers to me.
This year I decided to introduce them into my garden after drooling over photos in other blogs for over a year. Echinacea seeds were easy to find but the pinky/purple seedlings in my mixed seed-tray (sown in desperation when spring was nearly over) grew into something else which may be the subject of another post.
Then I thought I had achieved a head-start with a cut-price rudbeckia plant until it frizzled during the only hot week we had this summer. The label advised "water daily". Plants like that should know that they're not safe in my garden. Maybe I would have put in more effort if it had been a more sophisticated variety like WellyWoman's cappucino or Linnie's cherry brandy.
So that was the end of this year's indulgence ... almost.
The other day, I was sitting on the back doorstep of my mother's house wondering how much longer I would be allowed to do gardening there. The perennial, yellow sunflowers were in their prime; she would have tried to convince me yet again how beautiful they were and I would have been dismissing them as just a huge weed.
Their tall stems and foliage gradually take over the right side of her garden during late summer, crowding out my favourites : tree peony, rhododendrons, hydrangeas and roses. I was certainly never tempted to plant a root cutting in my own - that's all it would have taken to recreate the sea of bobbing, yellow daisies. She appreciated them, mainly because they are the only flowers apart from wild asters at this time of year. In their defence, they are easy to control because it just takes a gentle tug to pull them out of damp soil, even though their roots grow as wide as the plant grows tall.
It was my annual job to pull them out just after they had finished flowering to keep the roots in check, while being reminded several times to leave three or four by the fence to creep forward for the next year. I was planning to continue the tradition, unsupervised for the first time, at the end of the month.
I never tried to identify them before writing this post - I was that uninterested. Could they be a primitive form of rudbeckia before they evolved the cone-shape?

After googling images, I couldn't believe that the closest species I could find was an American native Jerusalem Artichokes or sunchokes - a plant with a tuberous root which can be used as a substitute for potatoes. I'd heard about them before, when I was going through a temporary heathy-eating phase because they contain a substance called inulin which passes through to the gut (as it's indigestable) and feeds the beneficial bacteria there. Unfairly, it's more reknowned for the resulting windy side-effects, which is probably why they can't be found in the supermarket. 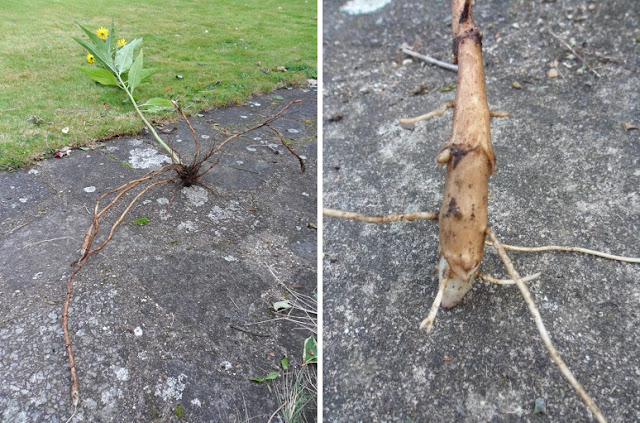 I'm trying not to get too excited about this discovery as I'm not absolutely sure that the plant has been identified correctly and the roots in their present state don't look particularly edible. Jerusalem artichokes are supposed to be harvested when the leaves start withering. In my Mum's garden these sunflowers have always been removed before this stage and they will be this year too - this is not the time or place for experimenting.

However, my own garden is ready and waiting - who cares about coneflowers !

Looking forward to seeing how this cheerful plant gets on in your own garden :)

Our yoghurt came with inulin for a while. Had to Google to find out what it was. Seems to have disappeared via the constant New Recipe.

Gee, wish I could help you with the identification. I found the information about jerusalem artichokes very interesting. I have heard of them, but never grown them. In fact, I grow very few sunflowers and even fewer coneflowers, because even though I love them, I have a terrible habit of weeding them out! Your mother was very smart to leave them by the fence so she would know what what they were when they were coming up, and she could let them grow freely. I hope you get to take some plants from your mother's garden. It will be a nice remembrance of her.

The roots don't look very jerusalem artickokey. The plants of JAs are extremely tall - some in a garden I used to work in would get to about ten foot tall. But maybe this is some other kind of Helianthus?

I was most surprised at how extensive are the roots. I have pulled them out, but never that carefully.

I love informative fun posts, love how you wrote it. And that last root looks like a big walking stick.

if they are JA's that's a pretty exciting discovery. Makes delicious soup, even if it's not recommended for a first date. I love coneflowers and they are supposed to be drought resistant once established I think. I've never got round to growing them.

Your flowers look like Heliopsis helianthoides to me, a kind of sunflower that is native to the eastern US. Look at this site to see if you agree: http://www.missouribotanicalgarden.org/gardens-gardening/your-garden/plant-finder/plant-details/kc/g520/heliopsis-helianthoides.aspx. I like this plant because it is easy to grow and blooms in the fall. Thanks for your kind words of congratulation.

Beautiful photos! Coneflowers are reliable repeaters in my garden, but I confess sunflowers have a special place in my heart. After the tornado devastated our property in 1990, it was a self-sprouted sunflower seedling, rising cheerfully amidst the destruction, that gave me hope that my yard could ever be beautiful again.

I agree with Carolyn, Heliopsis helianthoides. They had me confused at first since they looked like the native perennial helianthus that bloom now but the center of the flower was off. That is why they are in the heliopsis family...almost a cross between the 2. I will be posting about my perennial sunflowers the helianthus on Wed. How wonderful to add them to your garden if you so choose but yes you need to control them as they will want to create a meadow.

I'll agree with Libby that the roots don't look right for JA's. If you're ever inspired to grow them you might find them in organic-y type food stores--here they show up around December or January. (They're better after frost.) The side effects wear do off after you've eaten them a time or two... Whatever those flowers are, they're a lovely color!

Thanks all for your comments. It seems that the concensus is that these are not Jerusalem artichokes. At least I had a couple of days of excitement.
Guess I'll have to buy them in the health-food store instead, especially now that I've been informed by Stacy that the side-effects wear off after a while. Soup sounds like a nice idea, Catmint.

Libby, Carolyn and DonnaGEV - I've checked pictures of Heliopsis, known of them are exactly the same as my mum's but I'm inclined to agree with you - shame it's also called False Sunflower.

Holley - maybe I'll plant it in a pot for rememberance. I don't think I want a field of false sunflowers with no vegetables.

Just digging up my Jerusalem artichokes now. They have grown really tall this year-about 8ft, and have produced a huge mound of roots for each plant. If you grow them, you won't be disappointed. Yes, they do have some slight-ish gaseous side effect, but this is a small price to pay for the taste of these delicious tubers. Always look forward to digging up my first plant in autumn. BTW, once you have them, difficult to get rid of them. Mine don't always flower.