I spend more time having meetings with people abroad by audio and computer these days than in the office. By the wonders of technology they can even tell if I am at my desk.
Last week, I selected the option to add the public holidays and observances in different countries to my work calendar; it's always useful to know when you have an extra day to complete a task because a colleague is on holiday in their part of the world.

I was flicking through the months to check that the download had been successful and was delighted to find that amongst the team meetings, deadlines, saint days and bank holidays there were "Insects Awaken" (05MAR13), "Grain Buds" (21MAY13) and "White Dew" (07SEP13). These turned out to be three of twenty-four days of observance in China marking the beginning of twenty-four solar terms.

When I last posted about the London Plane Trees in my local park, I wrote that it would be my final seasonal celebration linking in with Donna Abel's meme, but now that the Chinese terms are in my calendar, it seems that four seasons just isn't enough.
So I'm having an extra celebration for the beginning of the "Great Cold" (today!).
﻿
﻿
I probably explained before that the unique, individual forms of these trees can only be seen in winter when the branches are bare, but I have to make a correction.

Their true form can only be seen when their bare branches are outlined by snow, which doesn't happen every year in the UK. I remember in the past we've had consecutive years without snow, which is probably why there were smiles all around today.

Back in the garden, it seemed that someone had beaten me to make footprints in the fresh snow. 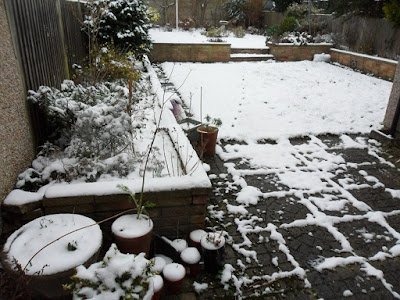 The hellebores were out, I didn't cut the leaves back this year to see if they give the plants extra energy.

Nothing much else to report.

Donna at GardenWalkGardenTalk has written a series of posts about encouraging birds to visit your garden to add some interest during the winter months. Here's one:
http://gardenwalkgardentalk.com/2013/01/09/the-garden-is-set-for-winter-birds/
I read all of them, even though I've never thought of introducing wildlife to mine. Creatures mess up my plants, which are the no.1 priority around here; pigeon droppings are splattered on my precious foxglove plants (that's with no encouragement) and I've already lamented about the cats.
Somehow, bird feed got onto my shopping list. I positioned it in the branches of my cherry blossom sucker, which is surprisingly still alive and in bud, and placed the cherry in its pot next to the japanese quince in front of the kitchen window because I've seen little birds flitting between it and the trees above.

Obviously, no birds appeared on the cherry sucker while I was standing behind the net curtain with my camera peeping through. I waited for ages just watching the snow falling, when all of a sudden there was a commotion in the parent cherry tree at the back of the garden. Several blackbirds had congregated there as if something was going down. I could feel the tension in the air so I remained poised ready for action in my hide-out. 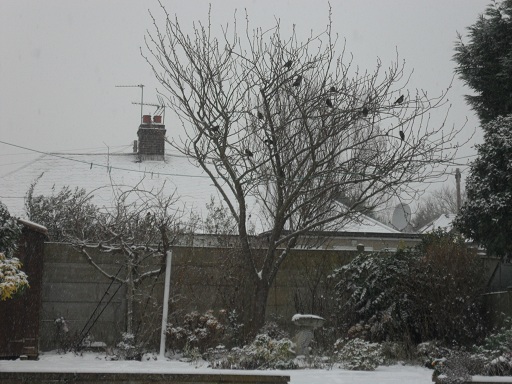 Then I saw the most beautiful creature. I knew that foxes visit the gardens down the street and rip up rubbish bags while scavenging for food if people leave them out overnight, but I've never seen one since I moved in. I had always imagined them as starved, skinny and dirty.
This one was self-assured, padding around softly, taking its time. Its tail was bushy and its coat was in such good condition that it could have been groomed. I felt almost privileged that it had chosen to nose around in my patch, though I know that when the snow melts I'll be cursing it for digging huge holes under my fences.

You've had it quite bad down south haven't you? Not much up here in Edinburgh. I so enjoy looking a real winter pictures :)
That fox is certainly very healthy looking - I moved to my current house 5 years ago and have never seen a fox. At my old house we used to be wakened by the young foxes playing outside the bedroom window!!
Lovely pictures BTW!

Amazing how foxes have evolved to do so well in suburban areas too.

Goodness me what a portly fox. I guess that is urban living for you. I too am a huge fan of the London plane.

What a beautiful London Plane, I don't think I have ever seen them like this, those around here in east London are being pollarded. I have one right outside my house, and several in my street, the council attend to them every other year. The trees are probably as old as the Victorian houses and there would not be room for branches like on your photos, but it's a shame the trees can't be allowed to grow naturally.

As for foxes, I had a family of foxes in my garden for nearly 2 years, so happy they moved on, they did so much damage! I am also just starting out feeding birds, bought my first bird feeder a couple of weeks ago, eagerly awaiting the big influx!

Beautiful big fox! They are smaller around here... And darker now, something close to a grayish red. I always feel privileged when I meet one too as though they could decide to show themselves to you.

That red fox against the black and white of the rest of the picture is just beautiful. What a treat to be able to see him! I wonder if he visits your garden regularly. I took a peek at the 24 solar terms. I was glad to know that Spring Begins right after the Great Cold!

I love the winter skeletons of trees especially when outlined with snow or frost.
Thank you for sharing.

I love foxes and yours is a stunner...I feel privileged when wildlife graces my garden especially a fox looking for little vermin like voles.

Wow! I know the thrill, too. Some years ago I looked out the kitchen window, and there was a red fox just down from the patio. At the time we had abundant rabbits. The foxes stayed awhile, and I noticed the rabbit population was diminishing. Finally, I hardly ever saw any rabbits, and then the foxes disappeared, too. Off to new hunting grounds, I suppose.

By the way, the Great Cold seems to be a fitting description of your garden now. And the London Plane trees are spectacular!

What beautiful photos of the Plane trees, and what a great name for a season, far more interesting than ours, though I suppose that is just the unfamiliarity lending romanticism. I really like the contrast of that glossy red fur against the snow. Hoep the fox didn't dig up any of your bulbs.

How nice that the fox came out to celebrate The Great Cold. It probably had an email from its Chinese cousins, telling it what day it was.
I like the names of the 24 solar cycles, Clear And Bright sounds quite pleasant.
I'm off to check out the other solar cycles now. Thanks for the info.

That fox is gorgeous! I've seen foxes around here only a few times. I'm sure my dogs scare them away. My winter garden looks just like yours - sound asleep mostly. :o)

What a beautiful animal a living fox is, with a thick coat against this year's weather. 4 seasons seems a bit meagre to cover the range of seasons, Chinese 24 seems much more appropriate.

So you there really missed the snow, without it for the last two years! Oh i thought people being warm blooded will celebrate years without them. That plane tree, i have followed your posts before, and yes i can fully visualize branches outlined by snow, yes I believe it is really majestic. I feel sorry for that fox because maybe it is deprived of food and can get more only when not many are outside coz of the cold.

The Chinese solar terms match well with the seasons in the UK, which probably explains why plants with chinese origin do so well here.