I've mentioned how I discovered a volunteer plant called ammobium in my garden which, despite its diminutive blooms, fuelled my lotus flower fantasy. It started flowering before the nicotiana, a long-flowering plant itself, and continued after.
﻿
Ammobium is also called "winged everlasting" due its winged stems and its suitability for dried flower arrangements ...
... which still delight me today, posied in a mug on my kitchen table. I can't find any UK web-sites which sell these dried flowers; their on sale in the U.S. from $4-$20 per 4oz bundle (about 50 flower stems), which I estimate is the full yield of one plant per year. I'll definitely try and propogate this one, considering that it's made itself at home in a dry flower bed (until last year) in which nothing else except roses will grow. 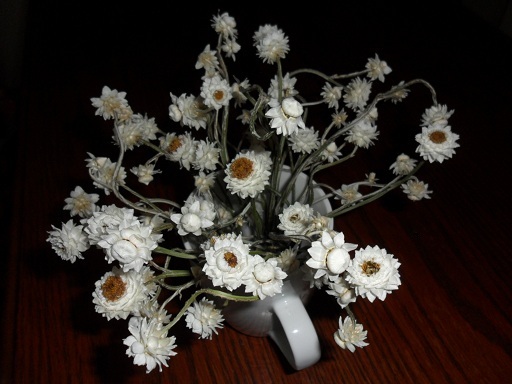 The plant looks like it might survive the winter, it's supposed to be perennial (in its native Australia), but it's not inspiring many fantasies at the moment. 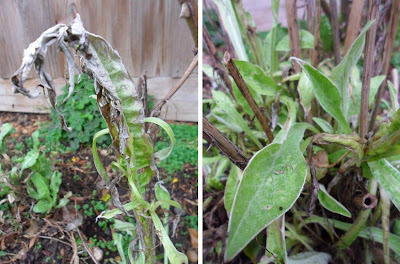 They say it's not advisable to buy your dream car, because you're bound to be disappointed by the realisation, but what if destiny led you to it and gave you the key? Wouldn't you just go with the flow? ....

The gutter attached to the roof at the back of my house has a small hole which I never noticed before last year. It's not a leak, the hole is perfectly circular, my gutters were designed that way to prevent standing water. During the recent downpours we've had, water gushes from the small hole and I've been preoccupied with water management and drainage like never before. I installed a water-butt under the hole as an interim solution until I figure out if I should invest in a better drainage system.

The night after, I was woken by an incessant thudding as drips dropped from a height of two floors above into the hollow vessel. The next morning, I sawed off the top two-thirds of the water-butt, filled the bottom section with gravel and connected the butt to a drain with a hose-pipe which seems to have done the trick. The top two-thirds of the butt will serve me well as a rhubarb forcer.

It's quite satisfying to hear water dripping into the butt being echoed by gurgling in the end of the hose-pipe by the drain. So I was sitting on the back door step being spritzed gently by the rain, wondering if Archimedes had ever had to deal with an over-flowing gutter, dripping on one side, gurgling on the other when I had a eureka moment of my own. Hadn't I always wanted a pond? (... but not enough to do the digging, lining and maintaining). More precisely I had imagined a lotus flower in a pond.


I remembered seeing a picture of one on a box at the diy store. On my next trip I noted that it was a white waterlily kit not a lotus flower. I was confused because my vision included the large flat leaves and floating flowers of the waterlily but the intriguing seedpods of the lotus flower (I'm not sure what waterlily seedpods look like as Google images also seem confused between the two). I bought the white waterlily as a xmas present for myself.

In the past I would have stopped to think that huge lily pads would not fit into my small water-butt, but as you can probably tell gardening has affected my rationality. Who knows? ... maybe the leaves will adjust their growth to the size of the water-butt like goldfish in a bowl, or maybe the restricted growth of the leaves will promote effusive flowering. For now I have a mug of dried flowers, a damp, brown stump in gravel and the potential for a dream to come true.

There is something magical about a water lily. Going to harvest a small bit of our pink one for the much smaller next pond.

Hope your dream comes true - you don't get anything if you don't try!

I look forward to the next chapter of the remarkable lily project!

And that exotic bouquet looks so like fresh flowers...

I have a pearly everlasting that looks very similar...you can see info about it here:
http://www.wildflower.org/plants/result.php?id_plant=ANMA

I think a waterlily would be wonderful and the pink huge one that grows in my pond came from a kit much like yours. keep it covered with water and it will grow and grow.

Good luck with your waterlily. If you get as much rain as you did last year, surely it will be very prolific! Love the winged everlasting. What an interesting plant! I have never seen this flower in person, but in your photos there is a innocent quality about the bloom that quickly fades when the eye moves to those surprisingly devilish winged stems! Even your mug of blooms, so white and angelic, on second look reminds me of Medusa!

Happy to find your blog today!
I've never had ammobium in our garden but I made a wreath with its dried flower. Your garden is great! Of course, I'm following you:)

What a great idea. I too love water lilies and I hope you have much success with your new "experiment". I also have pearly everlasting. I like the unique feel to the flower.

What a great idea. The leaves should cover the surface area to prevent algae too. Hope it flowers.

I wish your waterlily well :)
Your story about your dripping guttering made me smile. Had similar from a neighbours gutter and it used to crack me up!!
I eventually had to 'say my bit' to him and give him his due he got it mended.
Could you offer your Ammobium some protection by the way of straw in an upturned hanging basket - it might be just enough to keep the cold at bay! I always to this for some of my 'probably hardy' plants and it seems to work.

I persevered for years trying Water Lilies in our small pond, they do grow in the Aberdeen area, needs to be in a position that is sunnier than I was offering. Good luck with your Water Lily project, you could have a go with one of the miniature ones if it doesn't work out.

Things must be looking uo because you bought yourself a Christmas present and hve an exciting new project in the works. That's great.

Those moments of inspiration have created many magic moments in the garden. I think you have a great idea! I also think it is very special that a native of Australia somehow found a perfect spot to grow in your UK garden. It's a cute plant, and I wish it and your new water lily both much success.

I love the looks of that ammobium, whose name seems like a hybrid of amoeba and Dendrobium, strange! But that talk about the gutter did not sink into me, i just know lilies are lovely. So go on dream and implement, you will have it, haha!

Gardening even in your sleep? No hope! Enjoy seeing how your new water lily adapts to its new home. Look forward to reading about your next gardening dream.

You are so clever! An excellent idea... I hope your dream comes true! Please keep us updated!

Donna - Thanks for the advice to keep the water lily covered with water.

Unfortunately Alistair, it's in a corner so there might not be enough sunlight. I might be able to move it in the summer if the rain has a rest.

Linnie and Holley - I dried the first batch of flowers by laying them on newspaper in my garden shed. I was delighted to find that the winged stems which were quite out-of-proportion when the flowers were alive, shrunk into wiggly shapes which just arrange themselves in a vase (or mug).