Like many other gardeners, for the past two years, I have cut away the hellebore leaves when the flower buds appeared to allow the flowers to shine.
In fact last year I cut the leaves too early, allowing me to witness the unbelievable resilience of these plants. The flowers bowed down to the ground, forecasting snowfall a couple of days later, then miraculously rose again when the snow had melted.

However, this year they remain au naturel because one of them has been poorly. I wanted to see if allowing the plants to photosynthesise, the way it was intended, would make them healthier; the size of their leaves suggests that.


The main reason I cut the leaves away before is because by February they would appear rather tired and messy. I didn’t have that excuse this year as the foliage still looks quite handsome, so I gave myself the challenge of taking some photos to convince readers to leave their pruners in the shed and just enjoy hellebores in all their glory.

It’s true that the mass of huge leaves hides the flowers almost completely so that they can’t be seen from the kitchen window, but once you take the effort to put on your coat and boots and kneel down to peek under the canopy, you will be in awe of the magical effect contributed by the green haze, complementing the tints in the flowers themselves. 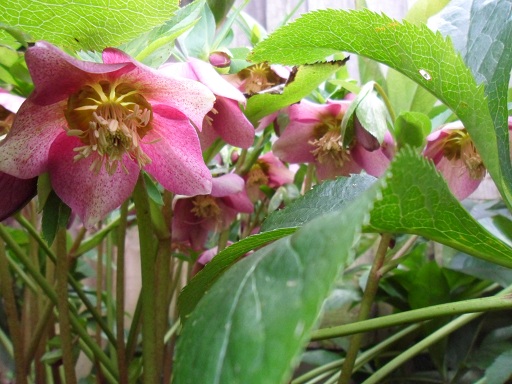 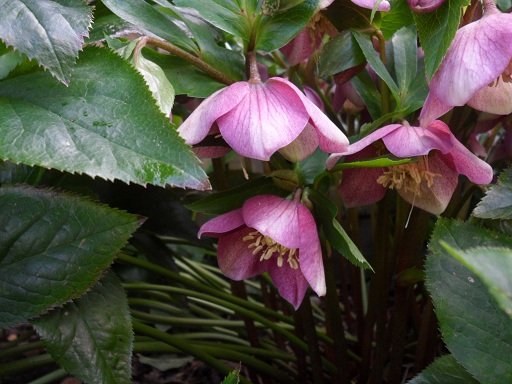 Reading advice on caring for hellebores, I probably should have divided this inherited clump a while ago as it’s quite large now, but then I thought that in natural habitats there’s no such division. Maybe I’ll wait for the clump to give me a sign that it needs to be divided, but for now it seems to be content, especially as it kept its leaves this year. 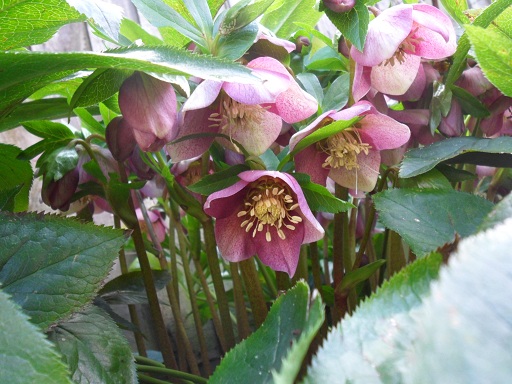 Email ThisBlogThis!Share to TwitterShare to FacebookShare to Pinterest
Labels: hellebores

Your Hellebores looks so healthy and blooms are a welcome sight in late winter :)

I'd never heard of cutting the leaves away before. I'd read before that the tepals do have the ability to photosynthesise after flowering, so I guess that's part of the reason it's possible?
As you say, they do look lovely when you get down on their level.

That's a lovely hellebore, and very healthy too. I only cut off manky leaves or ones that completely hide the flowers, I think they look a bit weird all naked in late winter!

I just planted my first hellebore last year - it bloomed this year. Not knowing when to cut off the leaves, I just left them. I have absolutely fallen in love with this plant. The leaves are so healthy and green, and I can still see its flowers. It has bloomed for a long time, too. Yes, I'm smitten! Your hellebore looks wonderful. I think they are much prettier with their leaves on. I wonder if it will stop flowering when it needs to be divided. As long as it's content, I wouldn't do anything to it, either! But, I'm just a novice!

I never heard of cutting the leaves either. I never cut mine, only removed those browned from the year before.

I have always cut off Helleborus orientalis leaves completely way about Christmas time. At that time of the year there is little photosynthetic loss and new leaves appear by March or even sooner. I definitely prefer to see the new flowers unenencumbered by old leaves and have never found the flowers have suffered for lack of protection. There is a powerful reason to remove the leaves. There are many foliage diseases of Hellebor that spread to the new leaves from the old if they get the chance. I never see any reason to divide them unless you wish to propagate a named variety. I just let mine seed all over the place. One of the beauties of gardening there is often no absolute rule- you do what you find best. May I commend you on your love that I share for this fine plant. Roger

I know I need to divide one of my hellebores. They are such a joy in the winter garden. Yours are lovely.

B-a-g, your Hellebores do look incredibly healthy and I can see your reason for experimenting with not cutting back the leaves or dividing. I have always removed the leaves in February as by then they are quite some state and way past being concerned with photosynthesise. Hellebores are difficult to view at the best of times and for this reason I would vote for removal of leaves.

B-A-G I had heard of this cutting back leaves, but had left mine because they look so good only cutting the browned and tatty ones....I love the look as you described so beautifully with the leaves, but my climate is quite different. I actually wait for the new leaves before I remove the old.

I have a large clump I have never divided either...not sure if I want to.

I love that greeny-light image b-a-g, but then I do belong to the "Don't Cut" school of hellebore cultivation. Most of the time.

Thanks all for your comments. Roger, I see what you mean - the diseased leaves are apparent but it's not clear if what they have is infectious.