It all started when Lucy at Loose&Leafy asked if I would be following a tree this year. I replied that I had no plans to but later it seemed a shame considering …

People who live abroad may not be aware that Greater London is one of the greenest cities in the world in terms of green space, which is estimated to cover at least 40% of its area, even before including lawns and approximately 2.5 million trees in back-gardens. Unfortunately, there is an increasing trend for Londoners to replace greenery with sheds and decking.

There’s no chance of that happening in my garden. I have at least five potted trees-in-waiting, but to date there is only one inherited cherry blossom tree planted in earth.


I was thinking the other day that the main element of my “woodland” is fundamentally wrong. I googled images of “cherry blossom tree in woodland” and found that even though they are mentioned, the images don’t look too convincing (there was even one of my garden on the first page of the results!).
Just a half-hour ride on public transport separates my home from a forest which covers 6000 acres. I visited a mud-pool there during a biology field trip decades ago but never returned under my own steam. The problem is that I wouldn’t dare to venture into a forest by myself or even with a friend. (In case you're wondering ... the difference between forest and woodland is : the former is where trees form a dense canopy while the latter allows sunlight through the trees enabling other plants to grow in-between.)
However, the appearance of cherry blossom buds this spring motivated me to stretch my comfort zone and attempt to go on an expedition to find related species in their natural habitat. I searched on-line and found that there are regular organised walks, including a “brisk 10 mile walk across field and forest” organised by the Ramblers Association (which sounded rather contradictory!).
If you happen to fall asleep while travelling eastbound on the red Central Underground Line, you’ll probably end up at Epping station, which is also the name of "The People's Forest" nominated by Queen in 1882. 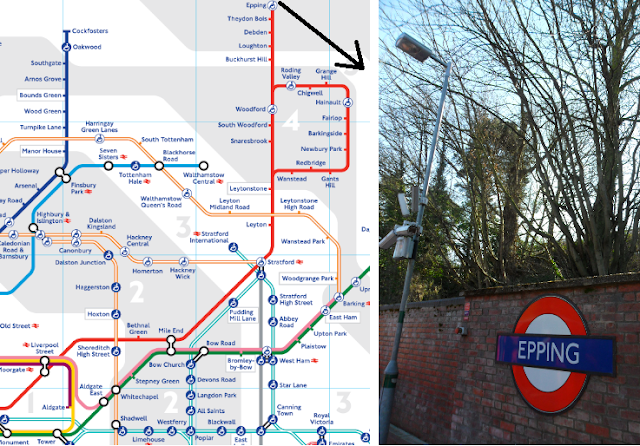 But first we had to walk along public footpaths which pass through private farmland. Despite the cold weather, the paths were muddy and it wasn’t long before my boots were squelching, my inexperience highlighted by my muckier clothes. I was so busy chatting, slipping and sliding, that I almost forgot my mission. 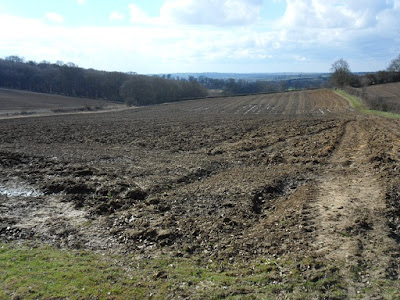 The route traced a section of the Essex way which is a footpath spanning 82 miles across the county, reassuringly punctuated by signposts and stiles.

Finally we got to the trees! – not a cherry blossom in sight.

In a particular patch, the tree trunks were abnormally stunted, potential candidates worth following through the year, if only to find out their identity.

Ivy is a native of the , the juvenile variety is commonly found in our gardens so I was surprised that the forest wasn't smothered by it. There were some trees in the hedgerows hosting the climber, including one sporting the bushy adult form with black berries. 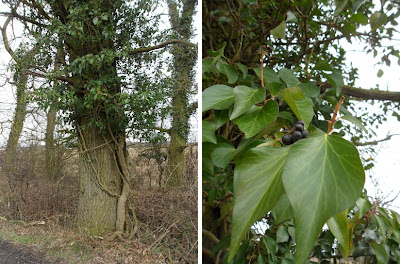 I also found some invasives. The pampas grass looked rather odd growing out of the hedgerow while the rhododendrons in the woodland had hogged all the space under the trees, choking out the other understory plants.

I wasn't expecting to see so many damaged trees ...

.... or trees doing weird stuff in the woods.

At the end of the day I was exhausted and exhilarated. I went in search of a tree to follow and found so much more along the way, including a lovely bunch of people in my neighbourhood.

Thanks for the tour, i wish it is as easy here too. Our temperatures are not as helpful, if you have extreme cold we have extr, and it is searing hot now, 37C with high RH. I always look at the undersides of forests in temperate countries to be easier to traverse because the undergrowths are not as thick as in the tropics. But your trees can produce more bizarre structures.

I rather like long distance footpaths but I've never heard of the Essex Way and I've never been to Epping before either - thanks for the show. Dave

How fun to take a woodland walk! And meet new people. Some of those trees are very interesting. You have to wonder if animals or winds or some other factor affected them in growing the way they do.

Any explanation for the weird trees?

Thank you for a wonderful walk .

I also get to enjoy some walking in the woodlands of Glamis Castle while I do my volunteer gardening in the walled garden project.

You always inspire me and I hope to venture out more and especially explore some areas around me. Interesting forest. Many around the world are being invaded by invasives (including and especially in the US) that have found their way from home gardens...too bad, but hoping to see more interesting Tree Following.

I appreciated the forest vs woods distinction. Now I know what I want is a forest and that will help me make the case when I am told to not plant the trees so close together.

Donna - I don't have an explanation for the weird tree behaviour yet but I'm on the case. I'm hoping to follow this forest through the seasons.

What a great thing to do, but that pampass grass made me think of gorilla un-gardening... Hope you go back later in the year I'd love to see the forest with leaves on the trees.

I am so gla dyou did this. A walk in the woods is good for the soul.

What an excellent day out - rigorous rambling - whatever next? It sounds as if your jaws got a workout too! I know what you mean about venturing into the forest alone - I get a bit on edge in forests - it's probably all those childhood tales of Red Riding Hood and wolves.

Well done for venturing to the end of the line without being asleep!

this is going to be fun to tag along on your future trips. A brisk walk across country, in my armchair.

Here am I after all these years finally finding out that a forest isn't just a big woodland area. Thoroughly enjoyed tagging along in your woodland walk.

Invasives is always such a red flag, when I hear it. What really boggles my mind - that many unknowing plant sellers continue to carry such plants in their stock.

Woodlands and forests are such interesting place to visit. I see a twisted tree, and then I find myself wondering why and inventing a story to explain it! When you mentioned your ivy, i chuckled a bit. English ivy is one of the worst invasives in my garden!

Hi b-a-g, thanks for helping me understand the difference between a forest and a woodland, I shall take advantage of your accuracy and ask the right definition for what I call woodland in my garden, could it be a woodland anyway? Even if it's just a part of the garden with trees and bushes?
I liked reading of what you experienced in Epping, you always make me smile.

Alberto - Actually I'm not an expert, I just googled it. Of course your garden has a woodland. Mine has a woodland consisting of just one tree.