This post was supposed to be about daffodils, but sometimes you just have to go with the flow ... 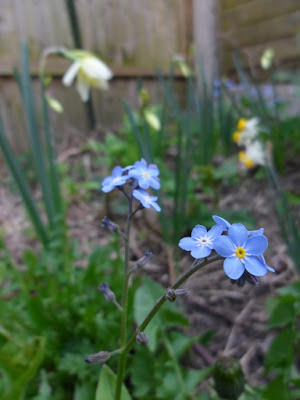 It all started when I was planting a lacecap hydrangea cutting.
It was pruned from the mother plant during winter 2010, produced  tiny flowers in summer 2011, nothing in 2012, and here it is today looking quite grown-up.

My mum was suffering from acute kidney failure when the cutting was taken. I suppose that was when I started grieving about the whole situation, as expected it didn't flower last year. People said that the pain would go away in time. They were right, except when I felt it subsiding guilt set in instead. I finally decided to plant it in dappled shade where it wouldn't need watering, where I could still look and remember when I passed by.
However, my garden was trying to tell me something, the dry bed where hardly anything grows and cracks in the paving saved for the dandelions ... 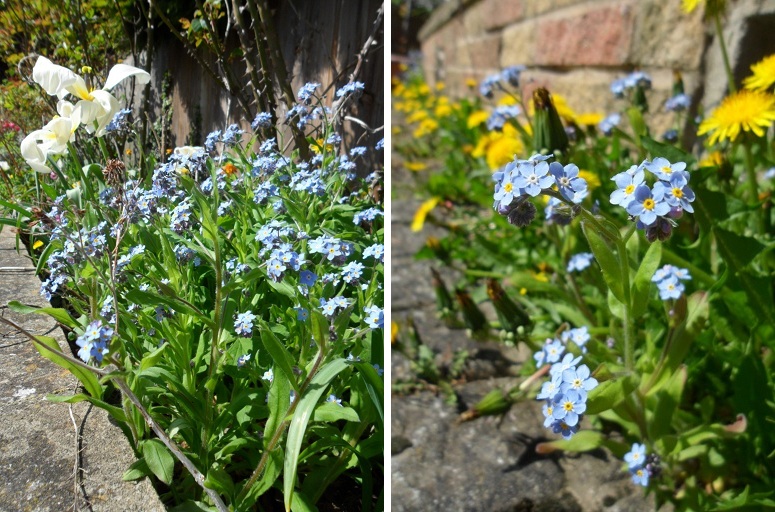 ... and my mother's garden too. I don't remember there being a river of blue before, perhaps she pulled them out as weeds, or maybe the rainy spring season provided the optimum conditions for them to burst the banks of the flower beds. 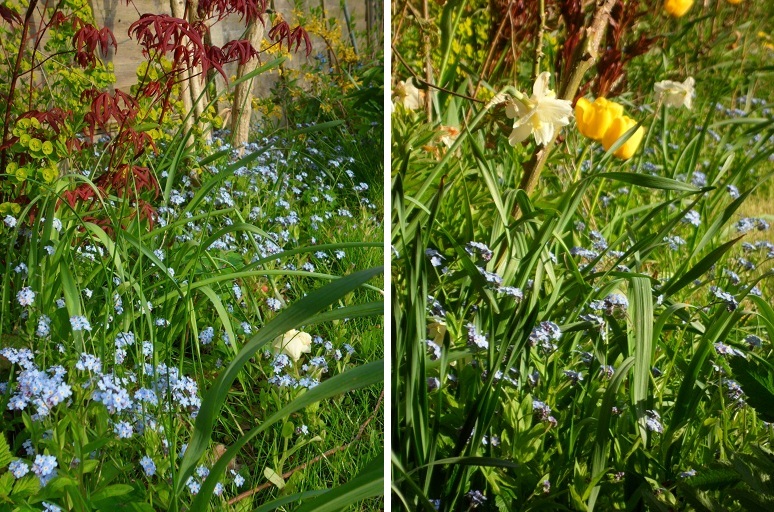 Myosotis are named after their furry leaves, like mouse ears, rather than their little blue petals which symbolise true love in the language of flowers.
German legend tells the story of how God forgot to name them till they called out to him. 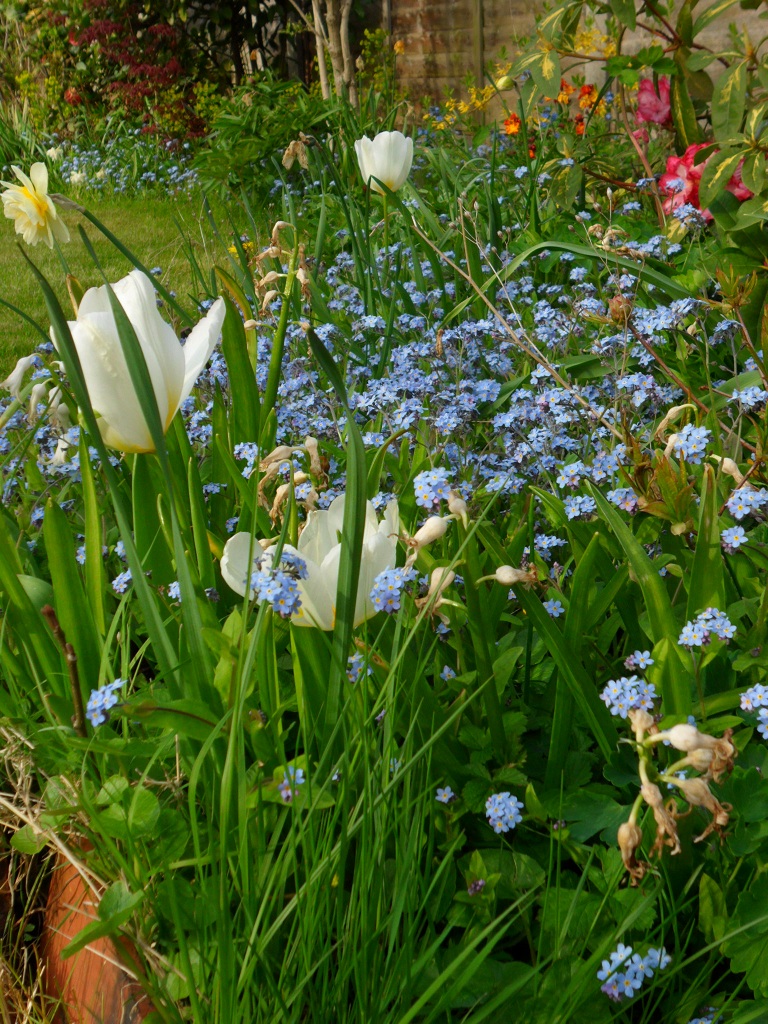 She used to talk about planting a vegetable patch at the back of her garden. It was one of the jobs on the list that I never got round to. I sowed some seeds which I found stored in a big envelope, many were unlabelled, some have germinated already - just wish I'd done it a year ago when she asked me to. Tiny canaliculatus and double-headed white daffodils are in flower now, planted near the fence at one edge in December, to get started; a weed protection mat still covers the major portion of the plot. 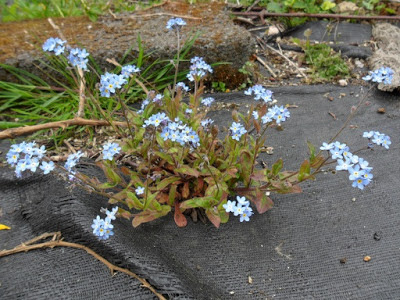 The apple tree stump at the other edge, another family member which was broken and lost, reminded me to water the three precious apple treelets in my own garden born from its seeds. 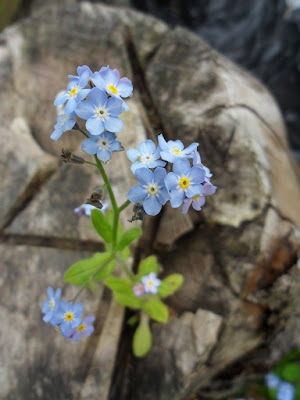 This isn’t meant to be a sad post. I'm just trying to say that gardening has a whole new meaning now.
I'm beginning to wonder if it was the reason why I started in the first place. 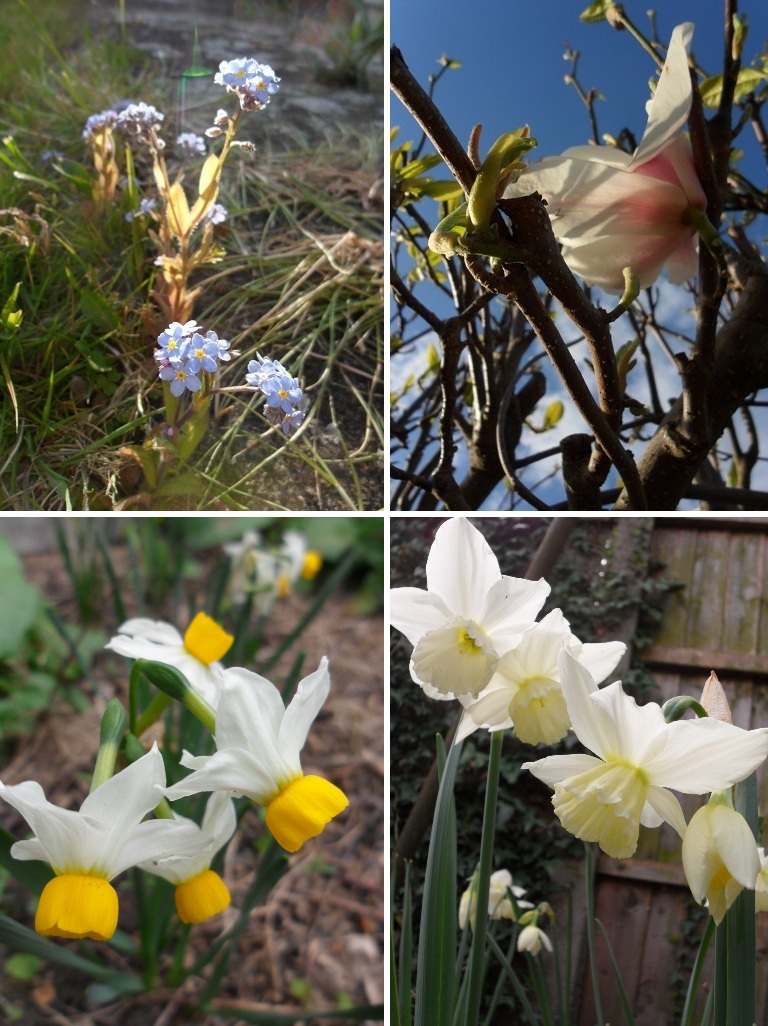 Forgetmenots may be the name given to little blue flowers, but they're not the only ones with a special message for me.
©Copyright 2013 b-a-g. All rights reserved. Content created by b-a-g for http://experiments-with-plants.blogspot.com/2013/05/forgetmenots-07-may-2013.html

This is a lovely post. We don't have this blue forget-me-nots in the tropics, but its name is so romantically famous, so i know it. The first time i saw it in Sweden as weeds under the hedges, i really went there to capture them on camera, i felt at that instance that i've documented something very precious. And it now always remind me of my memories of Sweden.

Endearing post, and good to hear what gardening means to you.

Forget-me-nots. What a beautiful reminder of your mother. And so wonderful that they bloomed so profusely for you this year. I love how gardening, and certain flowers in particular, can pull at our heartstrings and comfort us at the same time.

Loved your words here b-a-g. The mystic garden experiences are just the best. And good job with that hydrangea cutting-- Happy spring!

A very nice remembrance and a bit of a sad post. Forget me nots really are never forgotten because they seed so profusely. My garden has quite a few of them. And they do seem to pop up everywhere. Maybe your mom did weed them out.

Forget-me-nots, Myra was just saying how she missed them in the garden this year. A very thoughtful post which made me think of when Myras mum died and a flyer came through from the local rose nursery advertising their new rose named Remember me.

You brought tears to my eyes...my garden brings back many memories of loved ones lost to me...and while I am sad I can't be for long there...it breathes new life into me every year....I adore FMN and now even more....thanks B-A-G

Not a sad post at all, rather hopeful, if anything. I think there is a kind of gentle magic in the way that gardening and the plants in them can provide comfort, meaning, healing, even. And aren't forget-me-nots wonderful? I've never had them before, but I am in love with them, and the intense river of blue they create. Hope your hydrangea flowers this year. And that the sense of guilt dissipates.

I love Forget-me-nots too, I think they can symbolise different things for different people, depending on what memories you have linked to them, just like any other plant. Lily of the Valleys was my grandmother's favourite plant and I have lots of them in my garden. They are a bit invasive and I keep pulling up plants here and there where they have managed to find their way, but I would not dream of taking them all out, I love them and they remind me of her, so I certainly want to keep them.

Good luck with your hydrangea, as it gets a bit bigger and more mature it will need no more than a yearly trim from you :-)

I appreciate this post very much! My own garden is filled with memories of lost loved ones and dear friendships that endure. A garden is a very personal space that may appeal to others who see it but always holds special meaning to its owner. It is amazing how nature can weave those connections.

Hi b-a-g! I have a lot of plants that remind me about dear friends or family, both living or dead, choices we made, people we met, thing's we've done. You are never alone in the garden.

I adore the forget me nots, and now have a white one that truly does symbolize its name - a reminder of a very dear friend, now gone, The blue ones come and go on our pond... every year I hope it is a big show, but some years they are sparse.

I had an Anchusa capensis, Cape forget-me-not in an intense blue. That plant is gone. Your river of luminous sky blue, sparked with golden dandelions is a triumph. An utter delight.