In the garden of my childhood, the compost pile between the neighbours' fence and the garden shed was a definite no-go area. At the time, I wasn’t convinced that there was goodness in the slimy, wormy mess of crushed egg shells, spent tea leaves and rotten vegetable peelings. I can’t remember when it stopped serving that function, maybe ten years ago. Today it’s a wilderness growing on what I suspect is highly fertile soil, needing constant maintenance, which is not a problem as hacking clearings through vegetation is one of my favourite jobs.


My mother didn’t show much interest in this spot as it couldn’t be seen from the windows and it’s quite shady, enclosed on three sides, under cover of the branches of the neighbouring tree – I just did as I was told.  I usually cut away as much as I can, rake away as much as I can, then don’t bother to dig, because digging isn’t fun and the weeds return in a few days anyway.


A couple of weeks ago, I was raking away, thinking for the hundredth time that there must be better ways to use this piece of land, when through the prongs I saw some familiar leaves, surely it couldn’t be ….  I felt like a truffle-hunter who had sniffed treasure. 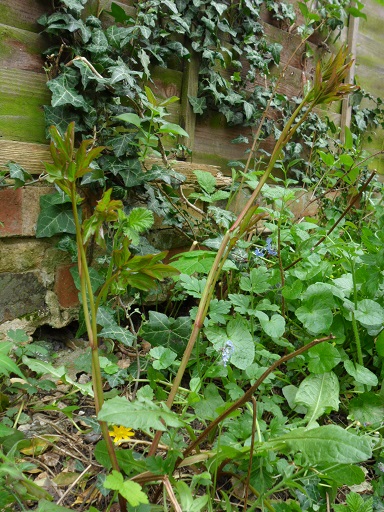 They looked like peony leaves but the nearest peony was at least 3 metres away and was already quite progressed with leaves and buds.
Could it be an off-shoot from a long-distance root ? … or even more exciting - a seedling with a variation of flower from its parent ? 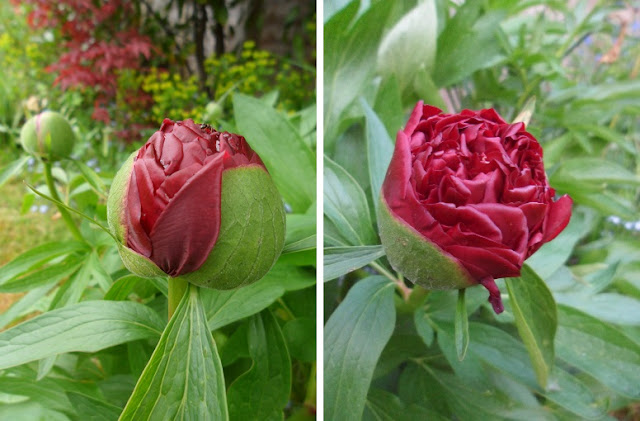 I dug up the plant as carefully as I could, it seemed like the root was never-ending, but I managed to extract it intact. For a second, I thought about taking it for my own garden as the two paeony shoots my mum presented me with last year died before they flowered, but it didn’t feel like the right thing to do so I planted it in an empty space in her right border. 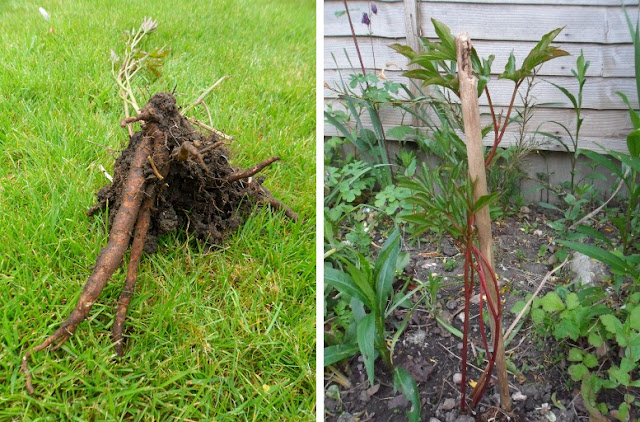 I returned to rake over the soil that had been excavated and found a section of broken root sticking out of the soil, the length of my middle finger …  could that bit be for me ?
I stored it in some moist compost (which might not have been such a good idea as since then I read that paeonies can’t stand water-logged conditions), planting it in the dry bed of my own garden a week later.
I was trying to get to sleep that night, when it occurred to me that the paeony might have been better off left where it chose to make itself at home, after all my success rate at replanting paeonies is zero so far. However, paeonies need full sun for at least a few hours a day, don’t they?   Then it dawned on me … I really hope my mum didn’t plant it there.

Email ThisBlogThis!Share to TwitterShare to FacebookShare to Pinterest
Labels: paeonies

Good luck with the Paeony, they are really lovely plants!

Well, I hope both of your transplants work out well. It will be interesting to see what color this new one is. That red of the parent is just beautiful, perhaps this one will be slightly different. I had no idea peony roots went down that far! I would venture to say that it could have easily seeded itself in that fertile soil. I think the garden was giving you a gift.

Nah, I am sure she didn't (plant it there). What a beautiful find. Some would say even more beautiful than a truffle.

There is something so sweet about peonies...I have to have them in my garden. I do hope this special one grows in your garden.

Good luck with the paeonies, both of them, I think you will have most luck with the big one you moved, a small off cutting seldom takes. It will probably sulk for a couple of years and not flower, mine sulked for 4 years after being moved, I nearly gave up! But mine is so lovely and much better in the sunny bed it is now than where it was before. Well worth the wait!

This is not the time of year to dig them here. Hope you have luck.

They are beautiful even when still a bud! I guess it knows where the good conditions are, that's why it sent those long roots to emerge somewhere. That area should be a good start for so many peonies in that corner.

Hi b-a-g, I only had rather negative experiences with herbaceus peonies, from what I got: they don't like being moved. But you didn't have other chances, did you? Anyway I think your bit of peony root should have been planted vertical and not horizontal as you did but I may be wrong. Remember I don't have good experience with peonies either! ;-)

Why don't you plant some hydrangeas in that spot? They would be very happy there and at least you could stop keeping the place tidy from weeds.

Good luck with your paeonies b-a-g, like me you seem to be in a quandary as to which spelling to use for Peony. Now that you have made some mention of Truffles, I will be expecting some full scientific article on them in the future.

Peonies are sun plants at heart so you definitely did the right thing.

What a treasure! I am so glad you were able to give it a new home. What a beautiful addition to your garden.

I hope both peony and small offshoot of peony both thrive and reward you with flowers. They are a plant I have never grown, but I think I could wind up trying at least one in my front garden, the romance of them appeals.

Helene - 4 years! I'm sure I will have dug it up by accident by then.

Alberto - I thought about planting it vertically, but I wasn't sure which way was up. Maybe I'll plant a hellebore divided from my garden in there.