When I saw the “woodland” at the bottom of my garden for the first time, I marvelled at what I thought was a unique feature. Then I started blogging and it became apparent that most keen gardeners save an area for shade-loving plants.
I added quotation marks when I referred to it so people would know I was pretending.

My memory is that it was filled with bluebells then, but over the past four years they have gradually been replaced by monster buttercups - may be because up till now I have given this part of the garden a vigorous spring-clean every May which included cutting back the bluebell leaves. I was more considerate this time.
I started a project to extend the "woodland", which was left half-done last summer. The part that I uncovered has filled with spreading African daisies and self-seeded foxgloves already, no bluebells though.


Here are the few bluebells left.


I decided it was time to visit the forest again with the ramblers. What could be better than seeing bluebells in their natural habitat?  Unfortunately, I arrived late so had to make my own way to the pub where they were going to stop for lunch. I passed some bluebells along the way which was a reassuring sign. 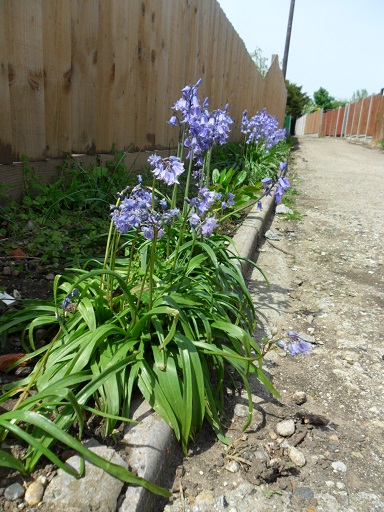 The main road to the pub started with residences on one side and forest on the other. Gradually, the residences disappeared and I was literally walking through the forest alone. Even though it was almost intoxicating to be surrounded by nature, I was grateful for the traffic driving by.

I peered into the depths but there wasn't a bluebell in sight. Nettles and ferns grew in the clearings. The sunny spots where trees had broken would have been a perfect place for bluebell seeds to fall.

I asked a fellow rambler if she knew anything about the strangely-shaped trees. She said it was probably due to wood-cutting in the past. I checked on the internet later, which confirmed that even though only royalty were previously allowed to hunt in the forest, pollarding and coppicing were practised there by "commoners" since Saxon times until 1878, when an Act was passed to protect its future due to the increasing population.
Coppicing is when trees are cut at the base of the trunk to encourage new growth from the remaining stool.
﻿

﻿
In a previous post, I mentioned that the difference between forest and woodland is that the latter lets sunlight through the canopy to allow understory plants to grow. It was just something that I googled at the time without much thought, but a few people commented on this definition. Checking again, it seems that the difference is not so clear because sometimes the terms are used interchangeably, and in Britain there's the added confusion that forest originally referred to royal hunting ground regardless of whether it was covered by trees.
However after researching coppicing, I realised (though it sounds obvious) that woods were places where wood was gathered. When this stopped, the forest grew back thicker than before - hence no bluebells.
Historically, coppicing was rotated to ensure that wood was always available for harvesting, with the side-effect of creating biodiverse habitats for a variety of plants and wildlife. This process has been replicated in a managed woodland which has grown over a decomissioned cemetery in central London, now designated a nature reserve.

Back in my garden, I came pretty close to coppicing this whole forsythia bush as it's not my favourite and has grown completely out of control. As the light flooded in, I felt a connection with the woodsmen in ancient times. 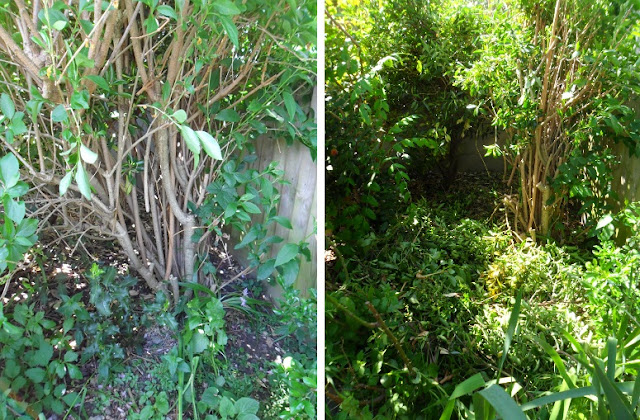 In that moment, it occurred to me that woodland is created when man meets forest and treats it with respect.
﻿

Are the bluebells in your post English or Spanish? I have lots of Spanish and have ordered English to plant in the fall.

All the bluebells in my garden are Spanish. I have yet to see an English one.

Hi b-a-g!
I started writing about my woodland garden as 'woodland' garden too :-).
I like the pictures of your woodland garden and your bluebells, I still don't have a lot of shadow in my garden so I have no doubt about it being a woodland, although eventually if I consider the tall weeds I have in there it could be referred as a forest too... ;-)

Your woodland with its bluebells is lovely! I enjoyed this post a lot, and I like your definition, "Woodland is created when man meets forest and treats it with respect."
﻿

It IS your woodland, no quotation marks needed. Part of garden blogging is writing what we 'see' in our own garden. Sometimes the brutal honesty of the camera fills me with despair, a reality check. I call the path behind the waterfall my Woodland Walk, there are trees now tall enough to walk under. I do have some bluebell bulbs from my mother - but I slip up on remembering to keep watering till NOVEMBER.

The history of coppicing trees in Britain is very interesting. Also you hinted at the perhaps original meaning of stool - logically and visually it makes perfect sense. Our neighbours coppice their forsythia every five years or so and it does wonders for the shrub. They always look superb after.

Lovely bluebells, even if they are not in the woods. Interesting to learn about how coppicing affects tree growth.

It is funny because, like you, I have that shady spot that I refer to humorously as my woodland. It is a small space just for the shade lovers. I never really show it on the blog much either. It is nice there though as that is where the dining table is located. Like you I like to walk in the woods. Love the big trees and the feeling one gets.

So excited to coppice my forsythia. ('Coppice' is a word I have been needing.) Wish I could send you some bluebells, we have lots. Anyway they certainly look the same and definitely are naturalized. I was astonished at a cemetery being decomissioned--What? I see those headstones... Lovely to have it all wild looking though and I bet the residents prefer it.

Living in a virtually treeless landscape I love seeing woodland gardens. So if you have a small corner for a few trees and some shade plants cherish it.

I really like your woodland definition. We used to live near a very ancient woodland that had been managed since Roman times, and probably before, the varied habitats depending on how recently the trees had been coppiced were a dramatic demonstration of why this human intervention can help to create a magical environment.

Thanks all for your comments ...

Patty - I wasn't hinting ..even though it was staring me in the face, I didn't see the connection of stools. Thanks for pointing it out.


Linnie - I remember seeing some fine examples of coppicing in your blog. Graves are rented for 75years in the UK. This was a private cemetery from Victorian times which was sold to the local council and is now a public park/nature reserve. I wrote about it here:
http://experiments-with-plants.blogspot.co.uk/2012/03/is-there-life-after-death-21-mar-2012.html

I love, 'In that moment, it occurred to me that woodland is created when man meets forest and treats it with respect.' as a perfect definition...your woodland is lovely and it has a few bluebells...I have never been successful growing them here.

Love your wee woodland and enjoyed all the great stuff about coppicing.

I don't have a woodland, but do have a shady area underneath a Hydrangea and rose where some bluebells have started to grow. I haven't planted them, the first year there was just one and now there are about half a dozen.Whether there was a bulb in something I planted I don't know, but I do love them.Thanks for taking us on a lovely ramble, I also do love walking in woods/forests

your woodland is so beautiful. The bluebells are stunning. To my mind, forest means something is really deep and dark and overgrown with trees and danger. So, I always use forest to refer to such growth in the tropic. For some reason, the forest seems like woodlands to me here in temperate climate as it has much more clearing and sunlight can filter in. Aw! that protected cemetary come forest in Central London would be such an awesome place, a perfect place to brew lots of haunting stories.

I like your final description about the creation of a woodland. Are you too late to order English bluebells in the green from a reputable supplier?

A wonderful post that teaches us so much. Bluebells are lovely.

Gardening shoe, I think I might have missed that opportunity now, but there's always next year.