I’m pretty sure that the herbaceous paeony which starts flowering with pink petals and a yellow centre then produces a further bloom of pink petals from within is paeony sorbet because I found a certificate with the name and pictures on the internet look similar. 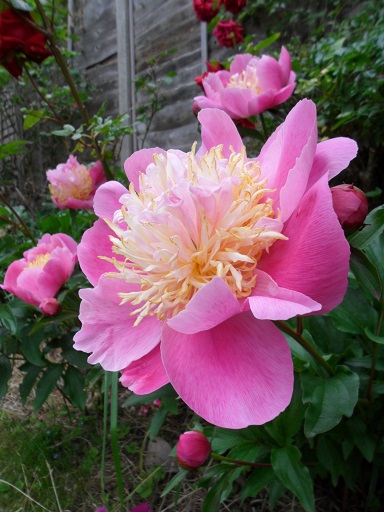 The slow-growing tree paeony with enormous, peachy flowers, but without credentials, might be kinkaku. Some descriptions mention a lemony scent, which I can't detect.
As a stake isn’t sufficient to support the plant when in full bloom, the major branches are strung from the garden fence like a puppet, which allows it to sway gracefully with the lightest puff of wind. 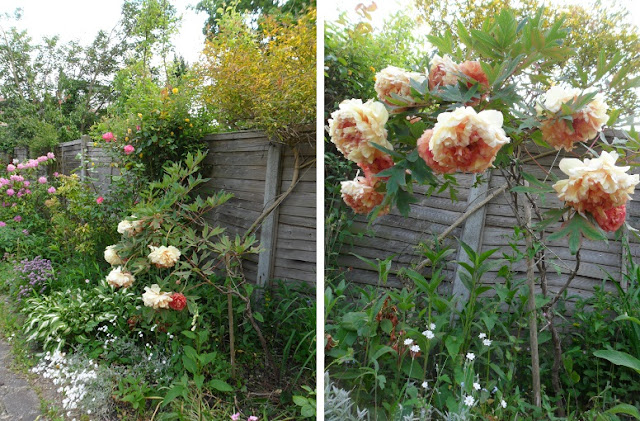 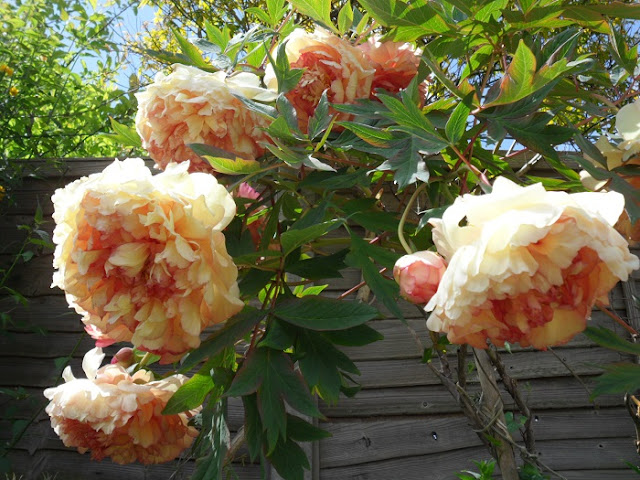 Recently I’ve been obsessing about reproducing this plant, maybe because it’s more challenging to propagate tree paeonies compared to the herbaceous varieties. They are grafted onto herbaceous root stock for commercial production, not to control their growth, as for apple trees, but to boost their chances of taking root.


I can see why because I have taken cuttings for the last three years; during winter there’s still a little bit of hope as the plant itself looks dead, but come spring-time foliage and buds magically sprout forth while my cuttings remain lifeless twigs. 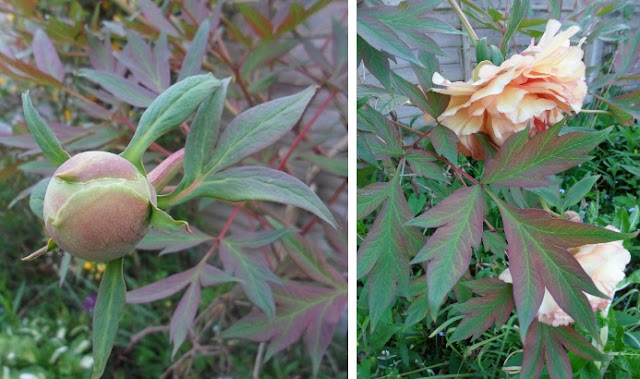 Alternatively, the roots can be divided, but that seems too risky for such a precious plant. In frustration, I nipped off a tiny shoot and stuck it in some soil. Unbelievably it’s still alive ten days later; I don't mind waiting a long time just as long as I can see some sign of progress.

A fellow blogger once commented that you shouldn’t be constrained by the planting times on seed packets. Paying heed to this advice has been quite liberating, releasing me from the spring-time frenzy and spreading the thrill of creating new life through the seasons, though I may have to wait till next summer for some flowers.


However, in the case of tree peonies the RHS advises to sow the seed as soon as it’s ripe which is why you can’t find packets of their seeds on sale. The seeds are double dormant, needing two cold spells, one to prompt the roots to develop and the other to prompt the leaves. After clearing away the weeds from the base of the tree, I could find no signs of new shoots from the tree itself or its graft, so I planted some fresh seeds in that spot; it being the most obvious place to look if I should remember to check when two winters have passed, or maybe by then another gardener might check for new shoots and find my seedlings instead.

More likely, they will just enjoy the flowers ... 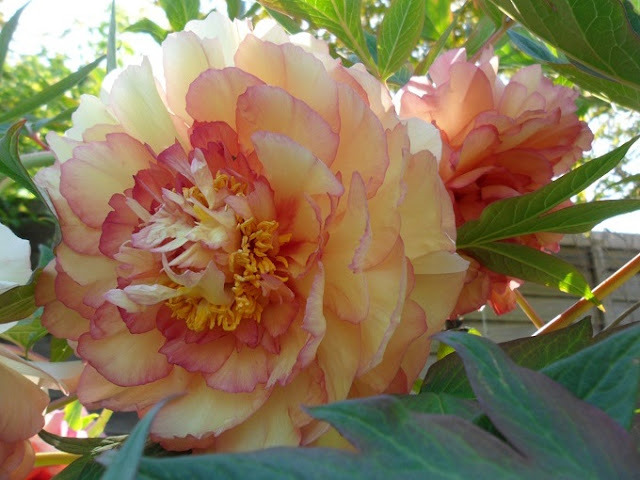 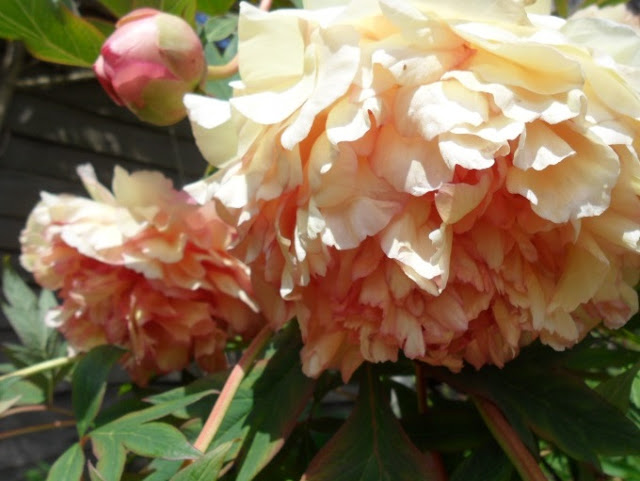 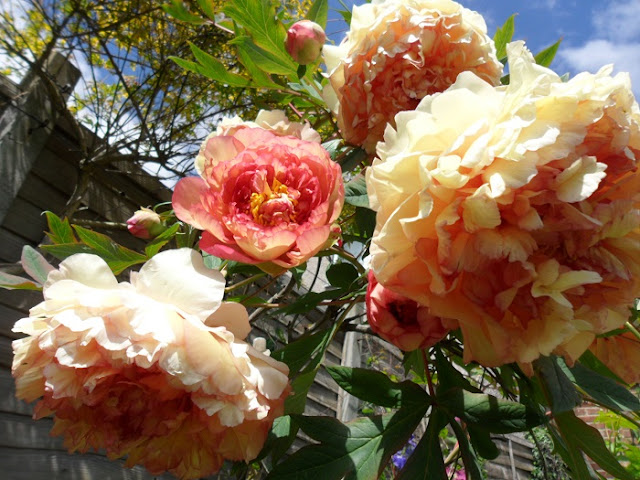 It's an investment of time but worth it!

Stunning Peonys so nice to see them in bloom.
My 7yr yellow tree peony had 8 buds ready to open and 2 opened just a wee bit then the wind knocked them all off.
Blooms were short lived but I did manage to dig up to tree peony seedlings so I have taken them up to the walled garden restoration project of glamis castle where I volunteer on 2 days.

Good luck. They are a bit temperamental. I have a client that collects them.

That certainly is a lovely Tree Peony - I'm not surprised you want to cultivate it.
I wish you well in your attempts!

B-a-g, your Tree paeony looks magnificent. Try as I may I have no success with them up here.

What a gorgeous bloom! And that apricot color is just delicious! I hope your cutting takes root, and your seeds do, too.

Such a lovely colour on your tree peony! Good luck with propagating it, would be nice to see if you get some seedlings!

I love the peachy color of the blooms. I have one tree peony that only blooms 1 or 2 flowers. i plan to move it to more sun as I am taking back room for veggies. I hope it survives. I look forward to your experiments...good luck!

Your peachy colored peony is fabulous! I hope you have success in propagating it. I know that tree peonies in particular can be quite pricey.

So pretty, like a rose/poppy cross...I like how the blooms are translucent and dark at the edges. I understand your need to propagate-- layering maybe? Good luck!

They are very beautiful, if only they grow here i will certainly have them. They really look like roses when in full bloom.

Never seen that before, what a beauty!!

Hi b-a-g! You know you could trick seeds into winter, right? You put the seed in some soil and maybe a plastic bag to keep a little damp and then put it in the fridge for a while. You might find detailed instruction on the internet. I don't see many chances to get a living cutting of a tree peony or a seedling but I know you are very patient and you have your good luck.
The peach peony looks great and also that border is filling up quite well, I like the look of it.

I am drooling over your peach colored tree peony! They wont grow in this climate, so I am very envious. P.x

Whatever the name... they are stunningly beautiful. Your methods make me smile... you think like an engineer. I happen to be married to one. Delightful!

They are beautiful with petal edges like a coloring book outline. I have never tried tree peonies, but they do have an elegance about them.

Scotkat - It's reassuring to read that you've had success with seedlings.

Linnie - I suppose if I loosened the string, the plant would lie close enough to the ground for layering, but the trunk looks so fragile that I would prefer not to tamper with it.

Alberto - I have heard of that technique, but it hasn't worked for me so far. I can't take all the credit for this border because it's in my brother's garden (which was planted by my mother). I am chief gardener though.

... having said that, I've just put some seeds in the fridge, just in case - thanks for the prompt Alberto!