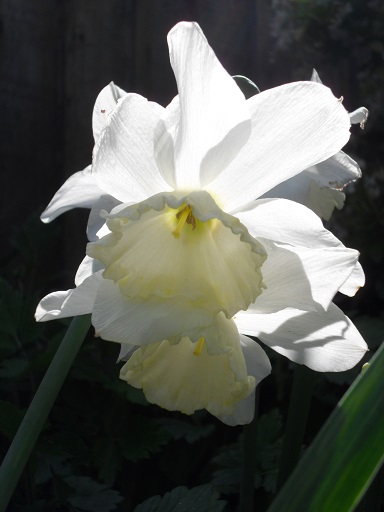 I didn’t intend to plant them in the sunshine as I’d bought the bulbs in the November sale planning to brighten up a dark corner in my brother’s garden. A few were left over so I planted them in an empty patch in my own. 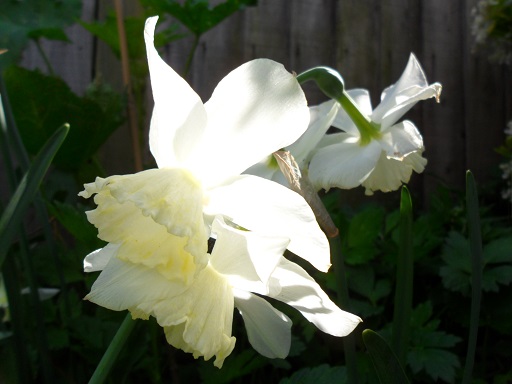 When I planted them in bleak mid-winter, I didn’t even imagine how heavenly they would look when the sun shone through them. 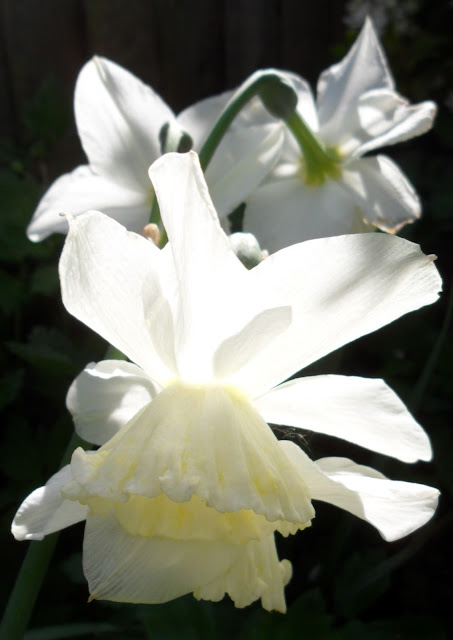 And that dark corner ? Can you see them ? You have to walk round the path to the shed in my brother’s garden, then look across past the bush with yellow flowers and under the frame of our childhood swing. 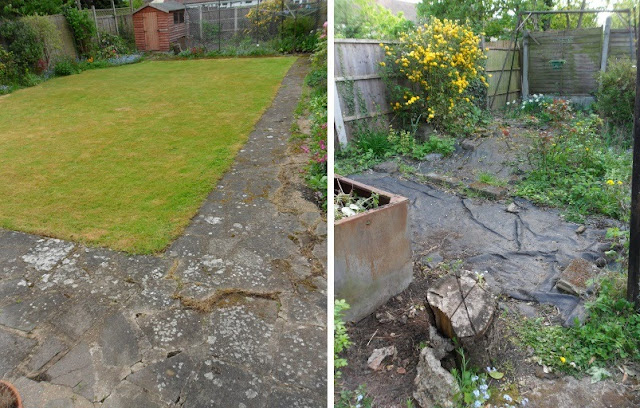 And here they were growing amongst the weeds. 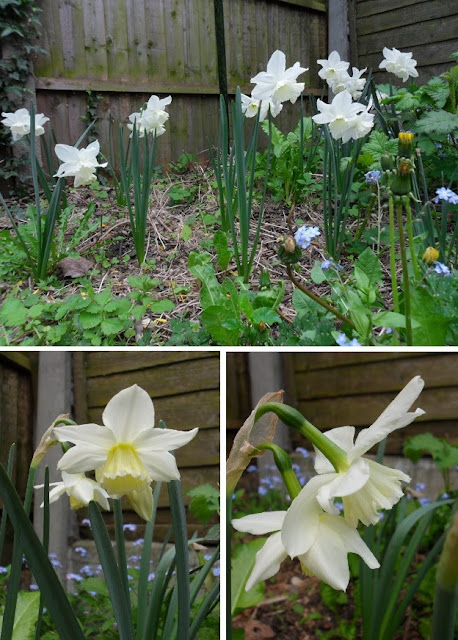 It seemed weedy then, but a few months later brambles, buttercups and other unidentifiables had taken over. In the foreground are two roses and some smothered strawberries which still endure since I planted them decades ago, when my Mum gave me a small patch hidden from view to experiment with. 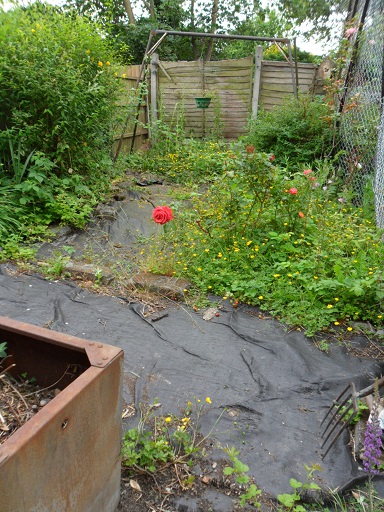 In the background is the area which she had intended to be a vegetable patch. I planted the daffodils there in rememberance, to get myself started on what seemed like an impossible task (though I know that tackling a patch like this would be a piece of cake to many of the garden bloggers out there …) 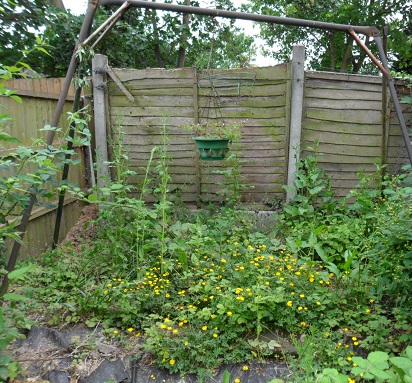 When the daffodils flowered, they encouraged me to take the trouble to tidy up the plot so that they would be in a nice setting. When the plot was neater, it was more pleasant to spend time in there. The more time I spent at the bottom of the garden, (instead of sitting on the doorstep daydreaming about flowers that look like angels), the less daunting it seemed to dig out the first forkful of weeds. Then once I started, I couldn’t stop …  all thanks to a packet of daffodil bulbs.
I wasn’t sure what vegetables I was going to plant to make my Mum’s vision a reality – I suspected it was rather late to be planting seeds, but I tried not to think about this too much as that’s where I’ve failed before, stopped in my tracks by analysis paralysis.

At the same time, I realised that I needed to fill the plot pretty quickly or the weeds would take over again. Then miraculously it all started coming together almost by itself …  I found strawberry plants being sold off at a fraction of the price so I bought 18 plants for £1.50 and a bag of straw.

The only fly in the ointment is that after planting the strawberries, I noticed the small print “Elsanta”. This infamous strawberry is always mentioned whenever people talk about the tasteless strawberries which are available in the shops. I’m hoping that growing them on soil which has only serviced weeds for decades might give them a bit of extra flavour. 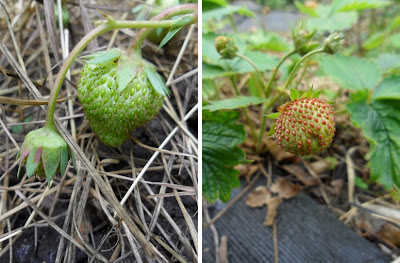 During the weeding process, I dug out most of the brambles, but left one monster plant which we used to pick blackberries from for apple pies. It had never occurred to me before to train it up and over the swing frame, even though it was growing right next to it. 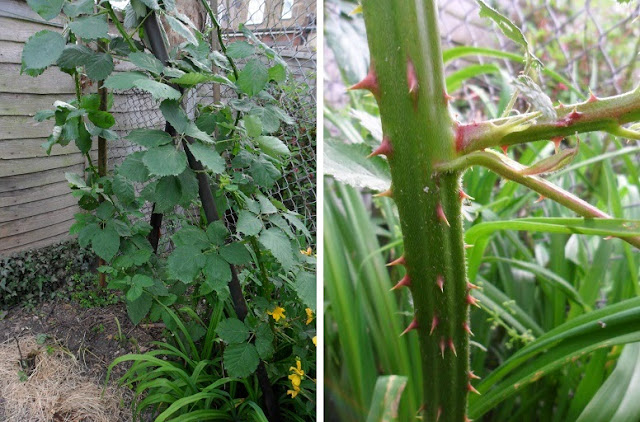 On the other hand, I also discovered a mini blueberry bush which I had counted as lost years ago. It doesn’t appear to have grown much since I last saw it, but at least it’s alive and in this new aura of hope and conquering all obstacles who knows what might happen. 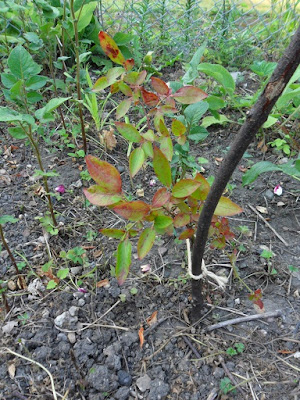 Then to round it all off, the raspberries started fruiting. It brought back memories of my Mum calling from the garden to fetch a bowl. However, we hardly ever ate fresh raspberries. We used to collect them in the freezer till we had enough to make a dessert. When my mother died, one of the difficult jobs I had to do was clear out the freezer because it contained left-overs carefully stashed away that no-one else could eat except my Mum. In the bottom drawer, I found several packets of raspberries that I had picked once. As I reluctantly threw them away, I vowed that I would never freeze a home-grown berry again. 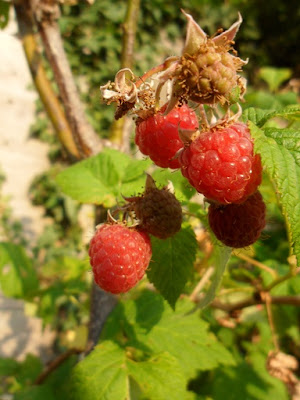 Another failed cutting …  do you detect a theme developing ? 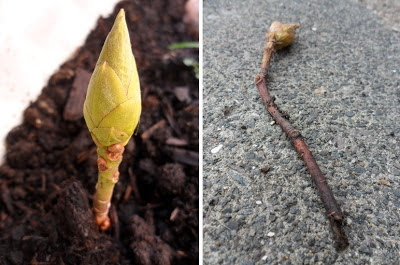 There were a variety of rhododendrons from which I had a choice to take cuttings. For example, the orange-flowered variety with variegated leaves, which if I remember correctly was the one which I transported back from the Chelsea flower show sale after being dragged there by my mother to serve as a courier. I wasn’t so interested in gardening then.


However, I chose the pink variety because it reminds me of a magical place that I visited and fell in love with, returning every year since  ... 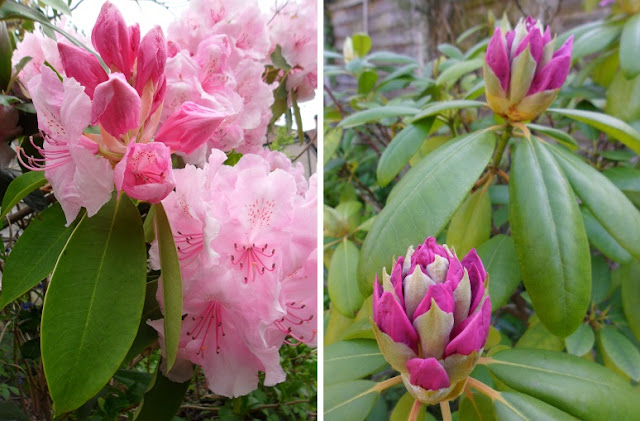 Forty Hall was built in the mid-17th century and stands on Forty Hill in the Greater London Borough of Enfield. Its land is now a public park which literally is in “EndField” as the M25, a major motorway directing traffic around the capital, is just a mile or two away.

There are many cultivated rhododendrons in the gardens immediately around Forty Hall, but these are not the ones that I’m thinking of. Behind is a huge field lined by trees on each side. Archaeological findings suggest that this was actually an avenue leading to a royal palace directly opposite, which was mentioned in 1381. 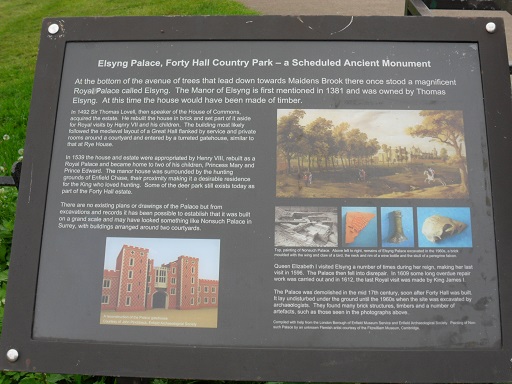 I’ll always remember the first time that my friend T proposed a visit to the site where the historical palace once stood. We had a cup of tea at the Forty Hall café, walked down the field/avenue to what looked like the bottom edged by a wood. He then headed towards a partially-hidden dirt track to the left of a non-descript tree, which led us down a bank to another dirt track which encircled a secret lake, known only to us and a couple of dog-walkers ....  That was what I imagined, until we later returned and I noticed a sign-post to The Lakes pointing vaguely over there.


I didn’t have a camera that day, but it seemed like the whole lake was surrounded by a garland of rhododendrons. 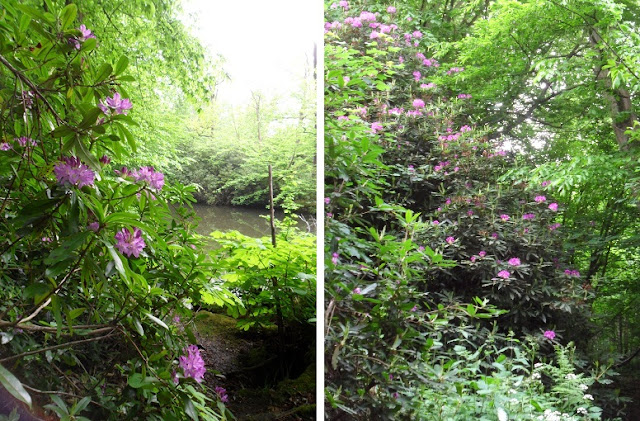 When I checked the internet, I couldn’t find any photos with the exact image I saw. I’ve visited annually since, trying to catch that same moment in time. Last year I was too impatient, we made the trip when the rhododendrons in the garden started flowering, but by the lake they were still in bud. This year (when all the photos in this post were taken) some shrubs were in flower but still not quite as spectacular as I remembered.

The local council had spent lottery money on renovating Forty Hall which included health and safety modifications to the dirt track which, sadly, made it look more official. I’m sure I didn’t hear M25 traffic the first time.


Rhododendron ponticum was native in before the Ice Age. Specimens from the Mediterranean or were re-introduced in Victorian times when they were valued as ornamental plants in country estates with the advantage of providing shelter for game birds. However, as time passed they proved to be invasive in the relatively moist, post-ice-age, British conditions due to their tendency for lateral growth, brightly-coloured flowers which captivate pollinators, toxicity (not only to wildlife but to surrounding germinating plants), and their role in aiding and abetting the phytophthora plant-destroying fungus. These rhododendrons need to be culled regularly by volunteers. I didn’t know all of this when I was introduced. 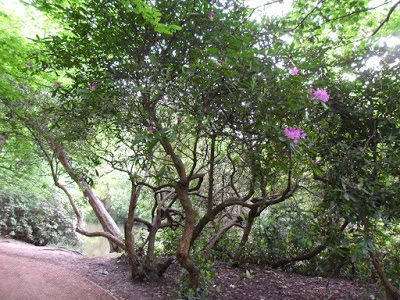 Unfortunately, I am already smitten ... 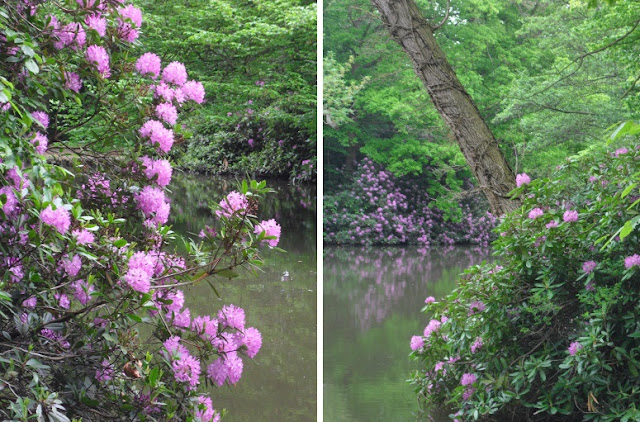