This golden rose is called Absolutely Fabulous – and is to me. However, the pollinators don’t seem so fussed with it … 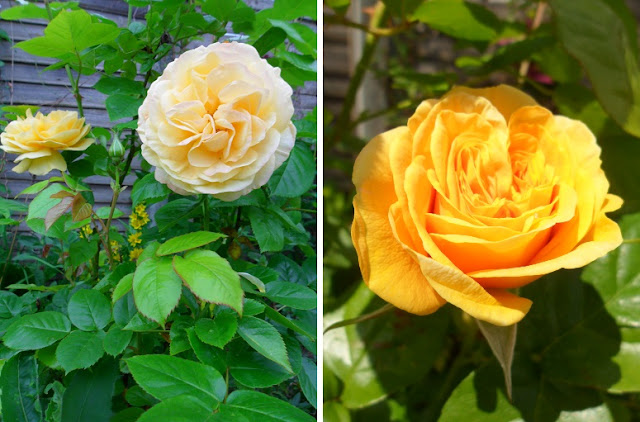 whereas this plant is literally a-buzz. 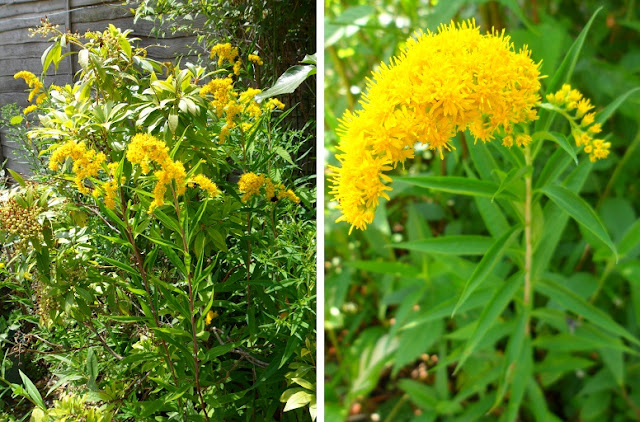 At first, I thought it was a mutant wild aster without petals, which wasn’t too far wrong, as it is actually Goldenrod which is in the same family. Apparently, British gardeners originally introduced it as an ornamental, even though it’s an American native often growing at roadsides. It is known to be invasive there, but is behaving itself in this flower-bed near .

There is a story attached to this plant which, as an engineer and gardener, I found fascinating. Following the First World War, three friends Ford, Firestone and Edison had a shared interest in manufacturing cars. They discussed the options for producing tyres without relying on raw materials from abroad. tested 15000 plants and found 1240 which yielded rubber - goldenrod produced the best quality. Ford presented with a Model T with tyres made from goldenrod rubber, however it turned out not to be commercially viable in the end.
Until this year I had hardly seen butterflies, but maybe summer’s late start allowed the caterpillars to fatten up for a bit longer and the current heatwave caused all the chrysalises to crack open at once. They’re everywhere, especially flitting about amongst the goldenrod, their wings substituting for fancy petals. Of course, they disappear by the time I get my camera out – except for one. 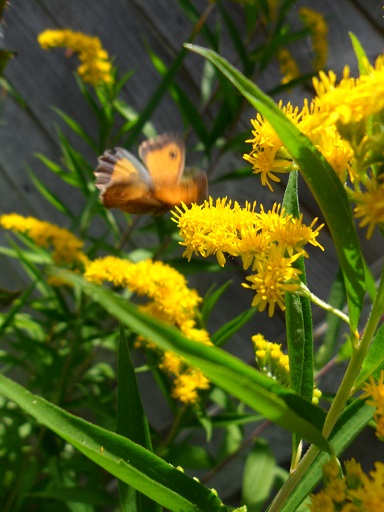 The Gatekeeper butterfly can be distinguished from the similar Meadow Brown by the two white spots in the “eye” of its wing, which is supposed to distract predators away from its vulnerable body. The latter only has one spot. The female’s upper wing is bright orange apart from the eye and brown edging; the male’s is crossed with a dark band of scent glands. They have relatively short proboscises which may explain why they are partial to the small florets of goldenrod.

I was honoured to spend some time with this little creature. It convinced me to plant a tuber of goldenrod in a dry patch in my own garden which wouldn't have been my first choice before. 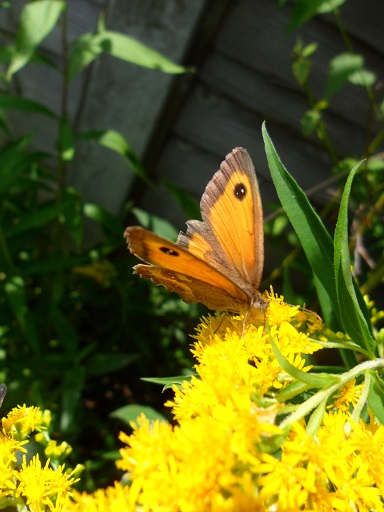 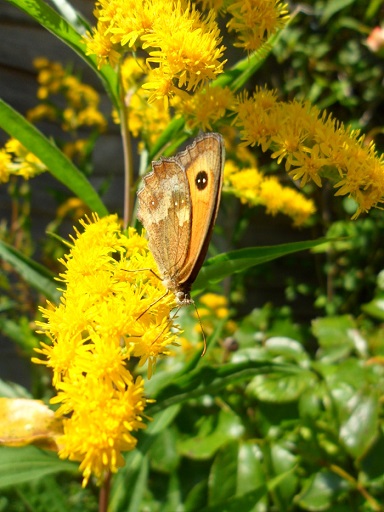 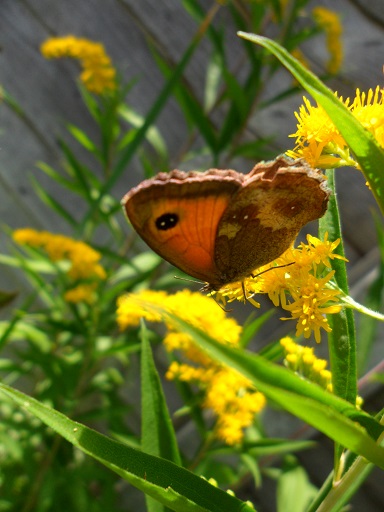 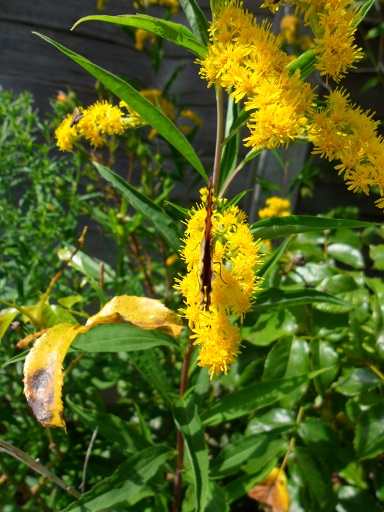 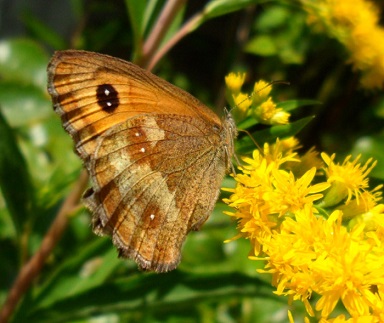 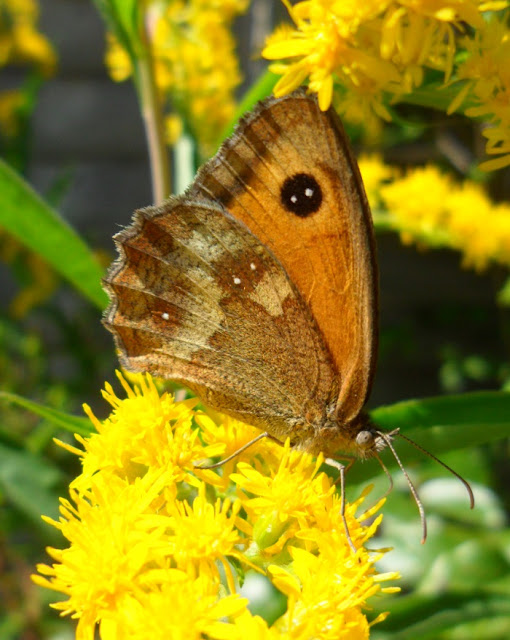 Beautiful to see goldenrod in your garden! I've never heard the story about rubber from goldenrod - I would never have suspected it would be a reasonable source of anything so resilient.

Over here in North America there are hundreds of species of goldenrod, ranging in size from less than a foot tall to 6' or more. Some are aggressive runners, but many are not. There are entire colonies of insects that center on goldenrod, so I always look forward to their blooms.

I love a bit of a back story to plants, fascinating post and lovely to have Goldenrod brought to my attention. It's definitely one that I'd like to have in the garden here, especially as it's so attractive to butterflies. I had to look it up and found that it can be invasive, spreading itself across the garden, which can only be a good thing, in my book!

What a cooperative (and beautiful) butterfly your Gatekeeper is! Trying to ID them always makes me go a little cross-eyed.

Interesting about the rubber--I wonder why the goldenrod (and other sources) ended up not being commercially viable.

Whenever I see goldenrod I miss rural NY state--whole fields of it bloom in September just as the grass is greening up again. One of my favorite sights of all time!

Your goldenrod is beautiful, especially with a butterfly on it. Here, it is very invasive - and in the autumn, it is amazing to see fields full of it. Now, however, instead of seeing it as a weed, I will try to imagine all the butterflies that appreciate it. Interesting fact about the tires!

You have one of my favorite natives here in my garden...they can be aggressive but really they just like to volunteer everywhere. They are easy to pull out so I can keep them at bay once I get time. The pollinators love this plant and they are flowering now through autumn.

Loved the rubber story. I hope you will plant this. There are many different kinds with variations of flowers.

I like goldenrod for the reason your showed. The insects. I have it in my garden too but it spreads, so must be watched. Nice photos of the butterfly.

My feelings are much the same as yours... and you said it quite perfectly... "I am honored to share some time with this little creature." That's exactly how I feel with the little creatures that call my gardens "home".

I haven't heard of that story, but i love learning new information every time. We are at the middle of our rainy season, and it really is wonderful to watch lots of butterflies the whole day, however some of them i can't really catch while sipping nectar. Sometimes i end up mad for patiently waiting without any photo of my desired butterfly.

http://thegardeninrainyvalley.blogspot.co.uk/hotos of Golden Rod. I posted on my own site about bees on our GOlden Rod yesterday http://thegardeninrainyvalley.blogspot.co.uk/ - I wouldn't say that I am finding it invasive, buit we do have a very robust hedge of it on our verge each year and some has appeared in the main garden this summer so we are watching it carefully! Insects do love it though.

Wow great butterfly images b-a-g! I like that you included the one showing him on edge. That rose is a lovely rich color--the leaves look entirely healthy too. I hope the blooms are fragrant. Thanks for the introduction to goldenrod, something I haven't read about before.

Great photos, I can see why you want some goldenrod in your own garden. Love the story too, I rather like the idea of driving around on tyres made from flowers. Ah well.

Hi b-a-g, that is a great story about the golden rod as a time served Ford motor mechanic I found this fascinating. Great pictures of The Gatekeeper butterfly cant say I have seen this one in Aberdeen, but well, perhaps in the future it may visit my garden!! What an absolutely fabulous name for a Rose.

Goldenrod is a beautiful ornamental plant always available for sale at Carolyn's Shade Gardens. There are dozens of species of goldenrod native to North America and most are quite well-behaved. Only a few spread aggressively which is what people usually mean by invasive. The. cultivar Fireworks is especially nice, and I love the dwarf Little Lemon.

Stacy - Apparently, Edison envisaged farming fields of goldenrod, like wheat, to supply the tyre industry. It probably wasn't deemed commercially viable when synthetic rubbers were introduced. However scientists are now reviewing sources of natural rubber and it sounds like you already have fields full.