Anyone paying close attention to this blog may remember that I’ve already written about wallflowers a few times this year, starting from winter when their long-awaited buds emerged at the same time as the hellebores. Their velvety red petals complemented the tulips and then the poppies through spring, and in summer their orangey, yellow hues competed with the marigolds.

I even experimented with them, inserting them in a wall to check if they had been named correctly, which failed unfortunately. However, I was more successful when I tested their robustness by using them to plug holes that the fox had dug out in a dry bed. I didn’t have to water them, but as the months progressed, I was less inclined to even if they had needed it. 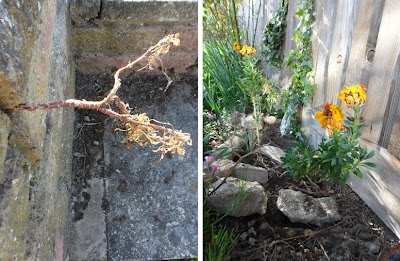 I can’t remember exactly the point when I maxed out on wallflowers. I used to think that I would never throw a healthy plant away as every flower is precious and there are always bare patches in the garden that need filling, but eventually the big sprawling mess had to go. The final straw was when they threatened to sow seeds over the patio cracks to spawn another yearful.

Thinking that I had aborted the next generation, I took time to smell the roses and other non-wallflowers. Then the other day I was inspecting my propogation pot where I had sprinkled magnolia, delphinium and romano pepper seeds with the hope that at least one plant would germinate out of the three, when I recognised wallflower seedlings which seemed to have hibernated since the year before. More annoyingly, each leaf was in perfect condition whereas the leaves of my single remaining broccoli seedling were covered in tiny holes.

I knew that wallflowers and broccoli were both in the brassica family. This summer I learned that nasturtiums are in that family too after identifying caterpillars which were shredding my flower basket display.

I didn’t mind the sacrifice in exchange for being delighted by the sight of cabbage white butterflies feeding on wildflowers and fluttering about in pairs. 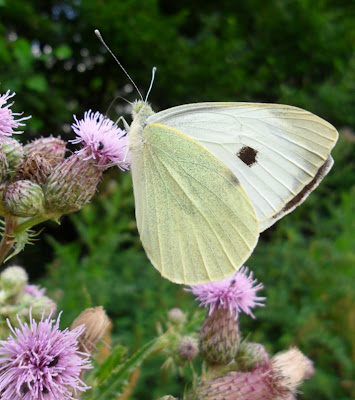 The thought did cross my mind to suggest to the caterpillars that my wallflower seedlings could be a potential food source. I was toying with the idea when I found a stray seedling which had grown into the wall of my house, by my seat on the back doorstep, and noticed for the first time that its flowers were like little butterflies in flight ... 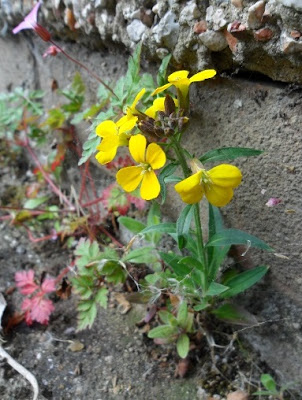 Today I'm linking up to the Grow Write Guild : This Plant is Driving me Nuts!
http://www.yougrowgirl.com/2013/07/22/grow-write-guild-10-this-plant-is-driving-me-nuts/

They're such cheerful plants and there are so many nice selections out there too :)

I envy you for being at home to be with your plants most of the time. I am living in the big city and go home to the province only once a month if possible. I have always been longing for long weekends to spend more time with them, having soil in my nails.

I love the shot of that butterfly, very vividly detailed.

How fun that you had a wallflower seed in your wall after trying and failing. It's like one last plea to let them live in your garden! It's amazing how some plants can be so infatuating the first few years, then frustrating after that.

I have never grown wallflowers, I love the fact that you tried to grow them in a wall and failed, but then one did it on its own succesfully, nature always does it better than us, right!
It has been a great summer for butterflies, I have seen a lot of white ones in my garden too.

Pleased to read that you've finally got your wish albeit not from all your hard work and effort.
I've loved having plenty of butterfly visitors this year. My neighbour has a massive patch of brassicas growing in his garden and I suspect that is the white's final destination!
Wallflowers are extremely useful in the garden but they don't like my soil.

The progression of your post is very interesting. You came full circle on the wallflowers after having many different experiences. That's what I love about gardening.

Too bad i am so far away; I would love some of your extra wallflowers! Now that they have found your wall, I hope they will flourish there as they did in other places. What a fabulous sight that will be!

I didn't realise that they flowered for best part of a year so, at the risk of introducing another thug to join the nasturtiums and orach in my garden, I'll look into growing some wallflowers. I like a bit of springtime cheeriness!

I had the same thought as Carolyn. It is good to see dealing in the garden from many perspectives.

I do remember your other posts so was surprised that you were done with them....but that last little one shows their name and those cute flowers...perhaps not totally done yet B-A-G! I had no idea nasturtiums were a larval host cabbage whites.

I had a wallflower plant once, with purple blooms. It bloomed constantly, even in winter. That's what I remember about it. I also almost remember pulling it up finally. Perhaps I didn't wait long enough...

As often happens when I read your postings, b-a-g, I get homesick for England. Wallflowers were my grandmother's signature plant. She called them gilly flowers, and as her name was Gilliver (when I was very young) I thought they were named for our family . Here in PA they are grown as annuals, and cannot endure our hot summers, but I grow a few occasionally to tell the grandchildren the gilly story. P. x

Caro - I think their longevity was due to seeds sown in autumn rather than spring.

Pam - I love plants with stories too.