The front wall bordering my property had one capping stone missing. Though the rendered coating looked intact, some areas on the inner side could be picked off by hand, loosened by retained moisture. In an attempt to repair the wall, I dislodged and cracked some bricks which provided some entertainment for the people walking by who probably didn’t even know who lived in my house before.


The most difficult part was deciding where to draw the line between adequate and in need of renovation. At one point I considered knocking down the whole wall and laying bricks from scratch, it would have been easier. A builder driving by stopped and quoted £800. I was tempted, but declined - I had begun and would finish, somehow.

It didn’t take long for the conquering spirit to wane - I wished I had never started, vowing to think twice in future. I was staring at the wall hopelessly when a passing stranger asked if I was trying to take the wall down. I explained that when I tried to remove the damaged parts of the wall, the bricks underneath broke off too. He gave me a tip on how to handle the bolster correctly. Thanks to him - I finally removed the damaged bricks in less than ten minutes.

I hardly spoke to my neighbours “before the wall”. Everyone is occupied with their own business in and it’s normal for neighbours to be unfamiliar, even if I stop for a chat I never know what to say. However, exposing myself to the world, sweating as I toiled in my worn-out tracksuit and slippers, remarkably, drew people to me and I became a local celebrity, on my half of the street at least.


I learnt to mix mortar, starting with a prepared mixture, then graduated to mixing cement and sand. A wooden spoon and a bucket were the only tools required - just like mixing cake batter. The wall was repaired as intended, though it will probably need to be redone by a professional in a year or two. One of my neighbours informed me that I was in good company with Winston Churchill. I checked the internet curiously and indeed found pictures of him bricklaying while smoking a cigar. I can understand how it could become addictive, I had grit in my hair and my hands were ruined, yet it felt so good - a world apart from my office job.

During this time I experienced an epiphany. Without analysing my future prospects, I found myself checking out the internal job postings at work and applying for a position which was a bit more creative and a bit less corporate than the current one. I interviewed for it (thought it best not to mention the wall) and start tomorrow !


Having invested so much time and care on the wall, I imagined the final touch would be a traditional box hedge. A friend warned that they are more trouble than they’re worth as their roots penetrate deeply and can destroy the foundations of the wall. Literally the weekend after, I went to the supermarket to buy groceries and there was a trolley at the entrance advertising buy-one-get-one–free box plants for sale. What was the likelihood of that? Of course, I bought six. 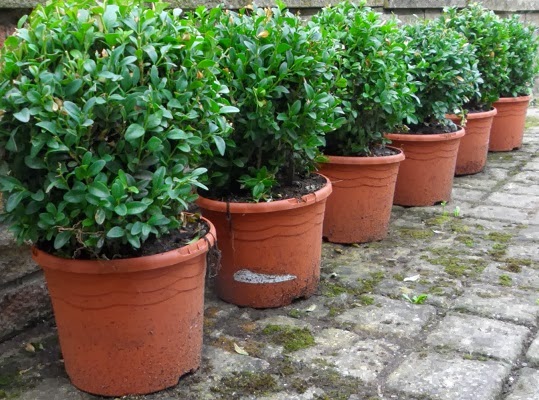 The boxes looked like they needed repotting. The soil fell away in clumps, as if the roots had been folded over and packed in. They seemed fibrous and it was hard to imagine that they could cause damage but I chose to stay on the cautious side keeping the plants in pots.

For now, the boxes are lined up with their soil covered with pieces of broken render. I’m hoping that as the months go by they will merge together into a sort of hedge. (It’s possible to encourage more open-growth by hanging fishing weights from the outer branches.)  Anyway, they distract one’s eye from the wall behind them. 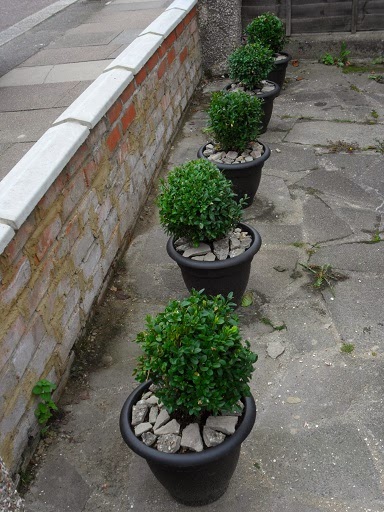 Email ThisBlogThis!Share to TwitterShare to FacebookShare to Pinterest
Labels: box

I’ve pulled out sycamore seedlings at this time of year ever since I can remember. Even before I was a gardener, it wasn’t my favourite chore. They get everywhere, in pots, in flowerbeds and under the straw surrounding my precious strawberry plants, propelled there by their incredibly effective wings. I admit reluctantly that it’s an example of evolution at its best. 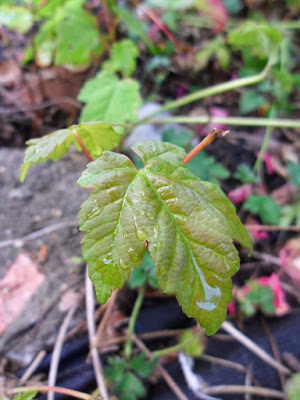 I was surprised earlier this year when I saw a pot on sale containing a little sycamore seedling. “Those darn things”, I thought.


I peered inside to see what was supposed to be growing in the pot but there was nothing else. The pot was labelled Heuchera. Wasn’t that the plant that keen gardeners rave about ? … highly rated for its foliage ? 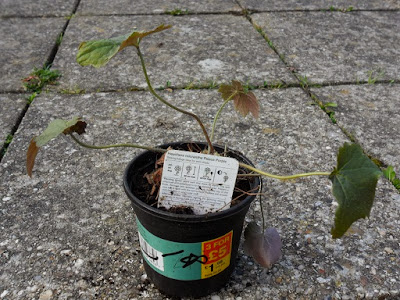 My first reaction was to abandon it on the shelf but curiosity got the better of me – luckily I trusted the judgement of those gardeners more than my own.


Within four months I had begun to see its attraction. 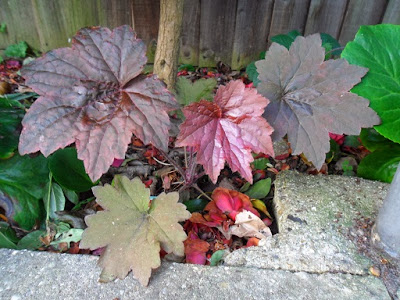 It even softened my annoyance with the sycamores, because when I look at them now ... 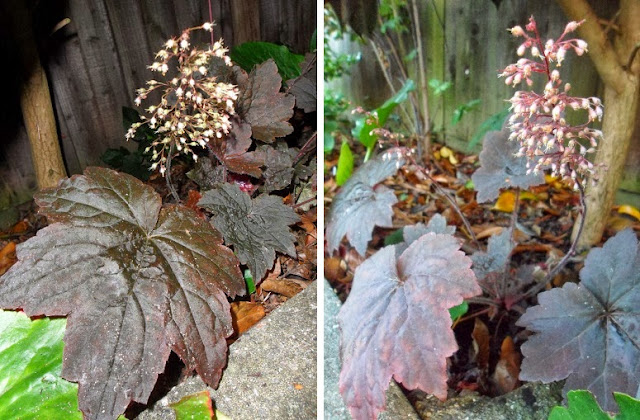 I wasn’t aware that it was actually in the same family when I tucked the heuchera next to my washing-line pole between two bergenias. The tall flower stalks which arise from these groundcover plants are the only clue. Just like bergenias, heuchera doesn’t need special attention, I haven’t watered or fed them but maybe they benefit from the slightly acidic mulch shed by the camellia canopy above.

All together they make a fine foliage display, the leaves of each plant telling a story of the compromises made between the needs to photosynthesise, sunscreen, transfer heat, hydrate and deter herbivores in their native habitats. 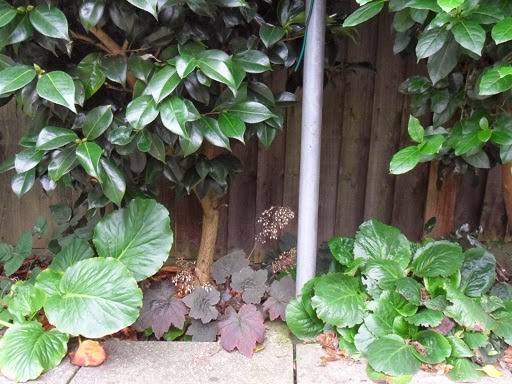 During late summer to autumn there is the added bonus of the "insignificant" flowers which to me look like the cascade from fireworks in miniature. 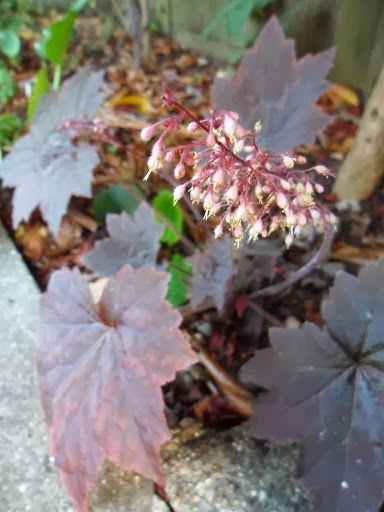 Today I'm linking up to Foliage Follow-Up at Pam's Digging blog on the 16th of the month.
http://www.penick.net/digging/