If I had to choose twelve plants to start a garden from scratch, sedums would be a must-have. Their tiny leaf buds which start poking up in December between the dried stems of the year before, become juicy and turn jade green in spring through to summer when I find them most attractive. The baby pink flowers in autumn are a bonus. This photo taken last year shows their only flaw - the way they splay out as they grow taller.


Janet @ Plantalicious commented that she administers the Chelsea Chop to her sedums in May to control their growth. This treatment seems to have worked on mine this year. I probably wont perform the operation with a pair of shears again though. The sedums made a disturbing squeaking noise as I hacked away and the remaining amputated stems were an unpleasant sight for a while.

In July while tidying up, I was surprised to find that the chopped-off stems which I hadn't bothered to clear away were lying on the patio still succulent and hardly shrivelled. Not only that, but there were new leaves sprouting from the centres of what I had initially discarded as excess. I immediately planted them as cuttings, and was rewarded with several flowering sedum plants in September.
﻿
﻿
I love the word succulence, it makes my mouth water just saying it, reminding me of biting into a ripe peach quenching thirst more than any beverage. It's almost as if the act of biting and bursting cells turgid with juice sends messages to the brain faster than gulping water and waiting for the digestive system to attend to rehydration. I understand that water retention in humans is undesirable, associated with weight gain and bloating. However, our nomadic ancestors were grateful for it, evolving to store water during times of drought. Consequently, our modern bodies store water as we eat too much when mistaking thirst for hunger.
Covergent evolution is when totally unrelated species in different locations find the same solution to a problem as generations progress. When planet earth started to dry out between 5 and 10 million years ago creating more arid landscapes, succulents and cacti started to diversify. Cacti are a sub-set of succulents characterised by their tufty areoles, stunted branch buds from which spines (vestigial leaves) and flowers are produced. Their barrel-shaped stems feature, minimising evaporation from the surface area of the plant. Spines have a dual purpose of keeping predators away as well as condensing moisture in the air.

I tried to grow cacti from seeds this year but was unsuccessful. The few which germinated after several weeks eventually died after being dislodged by accident during watering. Anyway, I've now got my eye on a section of my Aunt's cactus. I'm relieved that she didn't take my advice to re-pot it, as I later read that cacti should be planted in as small a pot as possible to prevent their roots rotting in wet soil, which seems to be their only major vulnerability.
﻿
﻿
Ever seen a Christmas Cactus that isn't overloaded with blooms at this time of year?
I keep moving this plant around the house to get the most of it.
It makes me wonder if cacti kept as house-plants are evolving even further to attract human pollinators.
﻿ 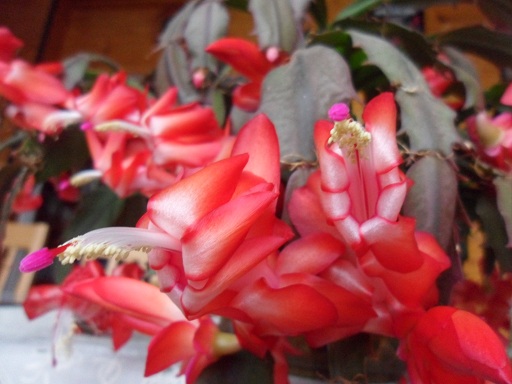 In case that fails, their segmented stems are almost begging to be snapped off and propogated.
Why wouldn't you?

Nice to see you dabbling on some cacti and succulents! Sedum is such a hardy, reliable plant. We don't bother with Chelsea chop some years, rather just putting up a discrete plant support/ring to help keep it upright especially for later in the year.

If you havent already tried them you might like Aeoniums and Echiveras. So easy to look after, they just need frost protection in the winter and they are easy to increase.

I have wondered about planting the top part of the sedum when cutting them down. I'm going to give it a try next year! Good luck with your Christmas cactus pollinating experiment. It will be interesting to see if what comes of it.

It makes me wonder if cacti kept as house-plants are evolving even further to attract human pollinators.

Can I quote you on that?

The Echevieria at my front door has a flower stalk with intentions of coming 'home' for Christmas. My prunings go to mulch, and my mulch grows!

Sedums and Christmas cactus are so prolific. I remember getting sedum as a pass along plant when I first started to garden it it grew like crazy. The Christmas cactus just loves to reproduce.

BTW, thanks for letting me know where dicky birds came from. I had no clue.

Diana - You can quote me, but I'm probably not the first person to think of it.

I never thought about propagating the Christmas cactus...I will have to try...and the sedum cut back is great and what a bonus getting seedlings...another thing to remember for the spring...

I think garden succulents are rather a neglected group and deserve more attention. Do try some of very small creeping types which are great in very poor soil and among paving. Many are derived from Sedum acre our native wall pepper and are splendid in areas where nothing else will grow. Easy to grow from seed too.

I love sedums too, but prefer the spreading groundcover kinds. I do cut my clump forming ones back in June to keep them from flopping.

Hurrah, non-floppy sedums AND free plants! I must remember that for when I get sedums for my new garden. Thanks for the mention too.

I love Sedum too - unfortunately I find my soil too wet for them and they fail miserably. As the bees etc love them - it's difficult to be without them.
This year - I took cuttings, just by sticking cut off bits into some containers. All have taken and I'm hoping that I can keep them going better in containers than in the ground.

Christmas cactus is one plant which i love much but can't grow in our tropical lowlands. I saw a violet and it almost haunted me for a week!

Gardening with almost no water, I don't know what I would do if I didn't have my sedums. Much to my dismay, the deer have started to nibble on them, first year that has happened.

I adore sedums and they were some of the first plants I grew in my garden 10 years ago. Those plants are still growing today! I also tried sowing cacti this year too and absolutely none of them germinated. My mother in law can grow them very easily though. Annoying!

Hi Bag! Love your sedum description, it really fits!
Mine grows and grows and never fall over, I guess it's because it seldom rains in my garden in summer so their stems remain stronger. I took many leaf cuttings this year too and they are very easy to do and very good for my gardening confidence!

I think the Chelsea chop is overrated. Much prefer a gentle prune, as do the plants, no squeaking.
Seriously though, can't do the Chelsea chop up here in Yorkshire, the plants don't have enough growing time before the bad weather sets in.

Mark & Gaz - I never thought of supporting them!

Thanks for the plant suggestions Helen and CroftGardener.

Crystal - In future I'll think of it as taking cuttings rather than chopping.