Around this time last year, I posted photos of this london plane tree. I didn't know its name or even recognise it as a particular species - it was just my beloved tree which had always been there, as long as I can remember.

I had visited in July to observe what had occurred since spring - the foliage was in it's prime and the bright red immature seed-heads had turned brown already. I didn't expect much to change before the next season, unfortunately I was mistaken. 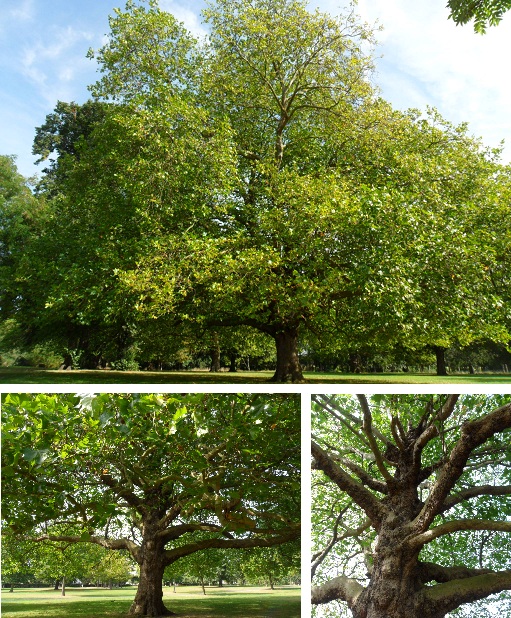 It wasn't till I started participating in Donna's meme that I really noticed the details, how the seed clusters hung from their unbreakable stalks for over a year, the difference between generations undetectable, each hoping for a breeze to carry potential offspring to a patch of moist soil as far away as possible. I had never watched out for the leaves to turn yellow one by one before they fell to the ground into kickable heaps.
In July, a photo revealed that one branch was growing into another. I scanned the whole tree, but couldn't find any other interferences. This solitary incident was somewhat disturbing, but I didn't think too much about it at the time, convincing myself that it was normal for haphazard branches to thrust forth blindly and then snap off when stronger ones resisted.

My life before had been about getting things done, ticking off endless lists, not sparing time to absorb what surrounded me.  However, the lists have been lost for a while now and all I have done since is look for signs : autumn leaves, the first primulas and small white butterflies.
I retraced the steps taken at the end of winter beneath bare branches, from the extreme right branch towards the trunk. Certainly more shelter was offered this time, but was that because the tree had transformed or I ? 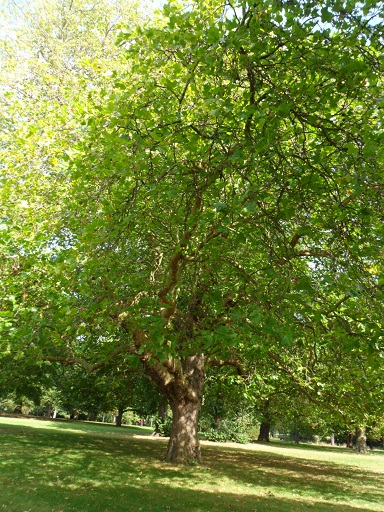 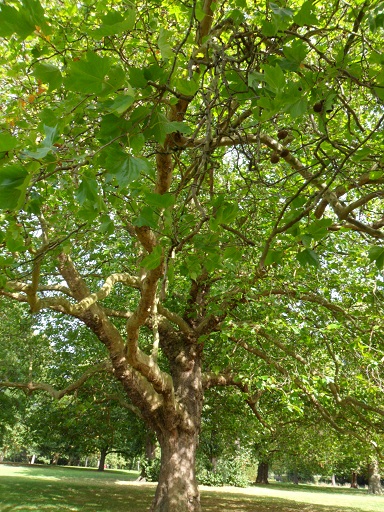 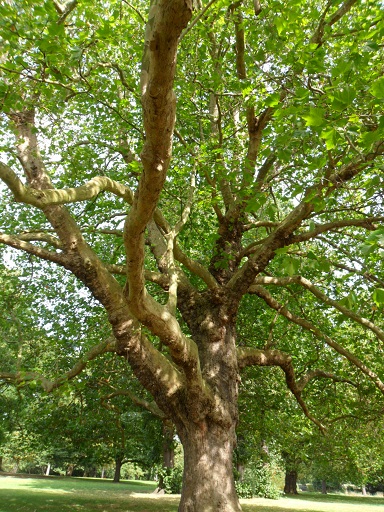 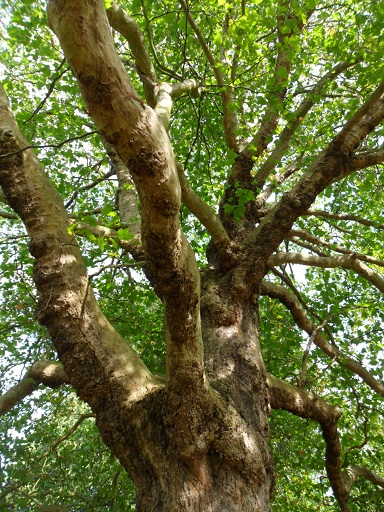 ... then I turned around and approached the older tree, the one in the depth of the park where I hadn't ventured before this year. 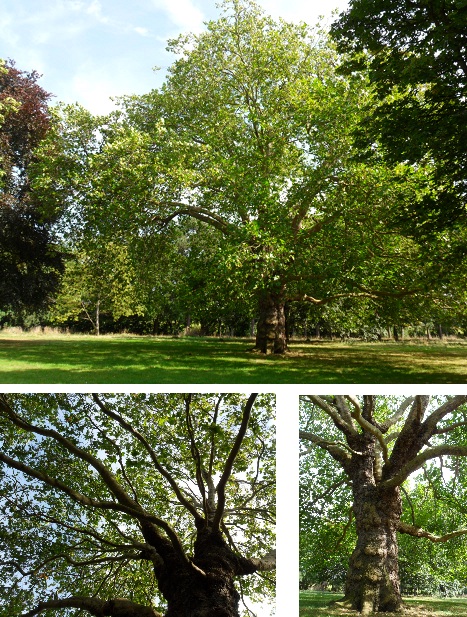 It pointed a branch like a crooked finger as if to tell me to look into myself, and raised its arm towards the future, while its bark showed me to face what life had in store. 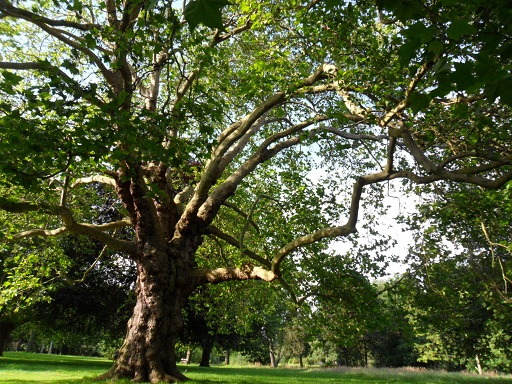 ﻿
﻿
Today I'm linking up with Donna Abel's meme : Seasonal Celebrations
...   and Lucy & the tree followers at Loose and Leafy.

It was three weeks ago when I visited my Mum to help out and have Sunday lunch as usual. In the afternoon, I inspected the flower-basket which I had assembled, quietly satisfied that the petunias which had sparked the idea originally were filling out, though the extra flowering plants which we had bought at the nursery had faded. Rather annoyingly, my mother had poked in an inappropriately salmon-pink geranium at the back, to make her mark probably. I tried to find an angle to take a photo without the misfit showing.

Checking the photo in the camera screen, I saw in the blurry distance some white roses against a camellia bush, almost but not quite my fantasy plant ...

(Fantasy Plant #3 : Gardenias for their dense, pure whiteness, dark shiny leaves and fragrant scent which I have only ever imagined   http://www.thegardeningblog.co.za/gardening/gardenias-101/)


My attention switched from the petunias to the roses instantly. Maybe I could take a photo which gave the impression that the white roses and the camellia leaves belonged to the same plant ... a pretty, pale pink hollyhock which I hadn't noticed before was surplus to requirements in this case.  It was lovely nevertheless, the flowers lower down on the stalk had cut-outs in the petals which looked as though they had been removed by a giant hole-punch. They reminded me of holes shown by bloggers complaining of damage done by leaf-cutting bees sourcing materials for their nests. 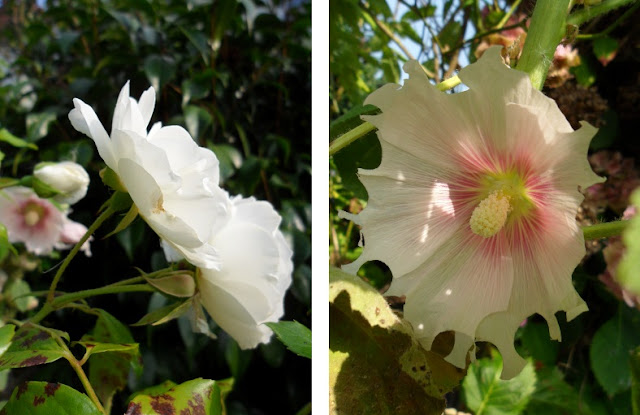 I had read about bees that do the same with flower petals but weren't they only found in exotic places like Turkey ?

What were the chances that a bee would actually approach the hollyhock, as I stood there with a camera in my hand, distracted from first the petunias then the white roses ? 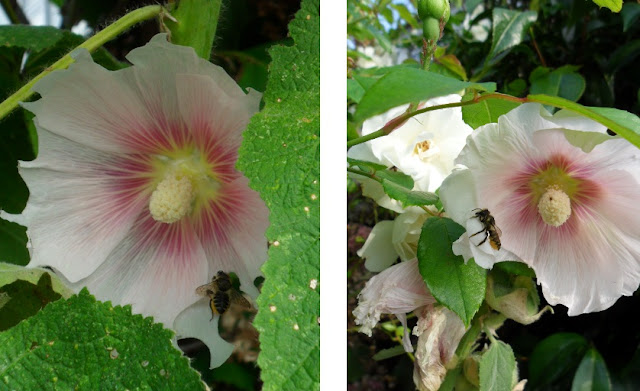 My mother was asking me what I was doing, staring at her flower-bed. I asked her why she had planted a geranium in the flower basket. Neither question was answered.

I don't think she knew exactly what a blog is. It was just one thing that didn't need to be announced proudly to the family and all of her friends. She called it my "work", though she knew it wasn't really. Sometimes she would point out a flowery scene and say : "Why don't you take a photo of that for your work?"

The next day she suffered a stroke which she didn't recover from.
The worst week of our lives so far followed then she died at the end of it.