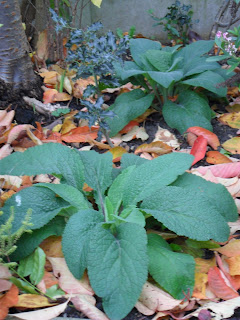 I can't think of a scenario when I planned an event at least 15months before its due date. Back in March, I grabbed a packet of foxgloves seeds without much thought in a 3for2 offer when I bought pot marigold and thyme seeds to germinate in my kitchen. If I had taken time to read about biennials on the back of the packet, I would have probably chosen something else because I didn't have the patience to wait for flowers next year.
At that time, I was under the impression that small seeds would have a greater failure rate compared to large seeds. That's why I planted one marigold seed each and pinches each of thyme & foxgloves seeds in the cavities of three seed trays.
The pot marigold seedlings grew quickly and I planted them outside to fend for themselves within 6 weeks. On the other hand, the thyme and foxgloves germinated easily and then stopped growing due to overcrowding I suppose. As the seedlings were too delicate to split apart, I had to keep re-planting them in bunches until I could handle them singly. This procedure killed a few hundred of them. I eventually planted the thyme in two pots of ten. I kept one pot and gave the other to Mrs F.  When the weather warmed up I left my pot outside but was rather upset the next day to find that all the plants had been dug out. Only one plant had enough soil clinging to it to survive and it's now a mini-bush.
It was similar story with the foxgloves except that the leaves were more delicate so I kept them indoors till June. By then I had trayfuls of these seedlings in damp soil on my kitchen counter and it was becoming unhygienic. I planted ten in my garden, gave some away (people weren't really interested when I informed them that they wouldn't flower till next year) and with great regret threw the rest into my garden waste bag.
The foxgloves' rosettes of arching leaves are now huge (compared to the tiny seeds anyway) and are competing with the broccoli to win the award for most handsome plants in my autumn garden. Surprisingly, the slugs & snails don't find them so attractive. They seem to hold so much promise (not just of the flowers they may produce) and I can't explain the feeling of anticipation when I look at them.
Posted by b-a-g at Saturday, November 13, 2010

I love Foxgloves! I've never tried them by seed.. Great post-thanks for the info!

Thanks Rebecca - I look forward to reading about your chickens.

I am thinking of growing foxgloves from seeds this year but I am not sure either whether I have the patience to wait the following year. Or maybe I buy seedlings. We shall see.

Hi Malay-Kadazan girl, There are annual varieties of foxgloves available in England, but you need to sow them in winter so they are exposed to cold conditions - it's called stratification. Not sure what you would do in Malaysia though.