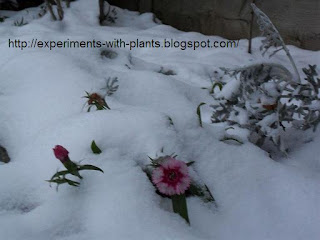 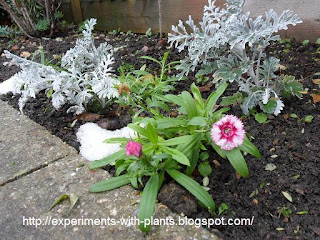 It's snowing again, just when the plants had recovered from the previous fall. Maybe it's Mother Nature's way of warning me for getting complacent about the effect of the bitterly cold conditions on my plants. Here's cineraria silver dust and dicentra (from the same family as carnations) resilient in the first snow and still perky after the thaw. I found boxes of them sitting next to each other on the sick plant shelf at B&Q and I planted them together. I didn't  expect them to last past autumn. It's an example of how a spontaneous purchase and ten minutes soil preparation resulted in plants to enjoy for months afterwards. If only I had made more little efforts,  I'd have a garden full of plants by now. Not sure if they will survive this recent snowfall though. I knew it was coming on Friday because my bones were cold, then yesterday the snow was driving down so heavily and icily that it hurt my eyes and my lips froze. I passed a man on the street walking backwards and nearly followed suite. It didn't stop me going for a long walk in the snow, battling the elements. The higher forces were trying to communicate with me and I had no choice but to listen after ignoring them for so long.
I remember the first time I thought of planting something was when I was a teenager and the family apple tree at my mum's home was struck by lightning. It literally is a member of the family, I've eaten those apples stewed with crumble topping and custard, every autumn,  for as long as I can remember being alive. Luckily the tree survived the lightning strike but it occurred to me that I should plant some of the seeds to ensure that future generations (of humans & maggots) could taste these cherished apples. I thought about it but didn't actually do it. Last year, nearly thirty years later, the tree was burnt by some rogue workmen who my mum paid to install a new garden shed. They burnt the remains of the old shed under the apple tree. Half of it now looks dead, but this year the other half produced a bumper crop with less maggots than usual. In fact the fruiting was so abundant that a heavily laden branch partially broke and dropped down to the ground, (luckily … or Naturally) the apples continued to ripen.
For what it's worth, one of my New Year's Gardening Resolutions is to concentrate on small actions that will make an impact long-term rather than short-term, eg. to plant something new every week instead of fastidiously weeding my patio. Even in my life it seems that series of little efforts have connected to make the biggest differences, more effectively than making big plans (soon abandoned when there are no immediate results). In recognition of this, and trying not to focus on the thirty wasted years (of tree-growing at least), there are now three apple seeds planted in frozen compost in my plastic greenhouse.
Posted by b-a-g at Sunday, December 19, 2010