When I was small, a frequently-practised ritual at meal-times was to save my mashed potato side-dish till last, then shift it centre-stage and splat on a dollop of tomato ketchup. This gruesome-looking mound would then be homogenised by my fork into a fine delicacy (to my palate) - pink potato. My mother turned a blind-eye as she wasn't a stickler for table-manners, however she warned me not to do that when visiting other people's houses. It made home seem like a special place, where I could just be myself.

I probably eat potatoes in some form every day. As an adult, one of my comfort foods is jacket potato with baked beans in tomato sauce and a sprinkling of cheddar cheese. If I'm alone, the last few forkfuls get mashed into my childhood treat. My kitchen larder always has a plentiful supply of potatoes, onions and garlic regardless of what recipes I've planned to cook during the week - you never know when there might be an emergency situation requiring a spanish omelette or fluffy jacket potato. I don't like to throw away food but these vegetables have to be discarded more often than I like to admit as they sprout quicker than they can be consumed sometimes. Considering that plant propagation isn't the easiest skill to master, it seems a wasted opportunity to deny plants which are begging to do so. 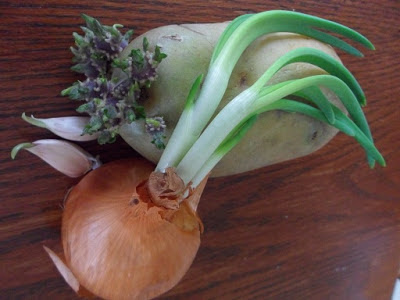 These surplus vegetables were planted in a compost bag in May. I prepared the potato for planting by cutting away its bulk, leaving sections to which the sprouts were attached.

Within a month they were already showing signs of taking root.

By early August the plants were flourishing. I don’t know if they flowered, as I wasn’t gardening for a while, neglecting them till the beginning of October.

I cannot describe the feeling of anticipation when I finally decided it was time to peek into the compost bag. I didn’t know what to expect because I wasn’t aware of how root vegetables are formed, I certainly wasn’t prepared for woodlice! It was amazing that they only damaged the tiniest potato which had four woodlice curled-up inside it. I discovered on-line that potato halves can be used to lure woodlice out of houses. It’s not clear how to lure woodlice away from potatoes though. The potatoes were pale and satisfyingly smooth with regular shapes, I’m assuming because they were grown in compost. The onion and garlic were still undeveloped but at least I could see how they were multiplying. 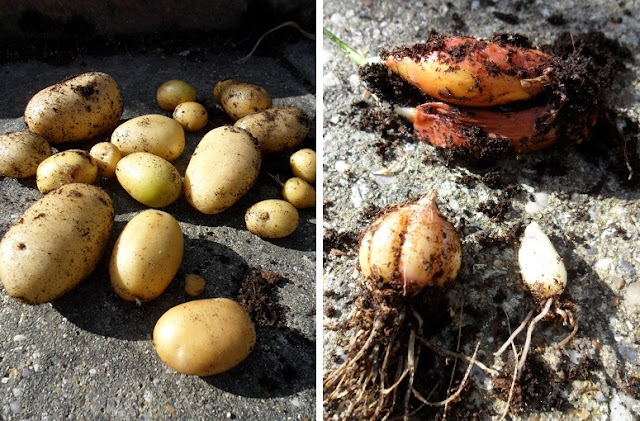 This year was a bad one for tomatoes in the UK by all accounts. It was too wet during the summer so they didn’t ripen beyond the green chutney stage. 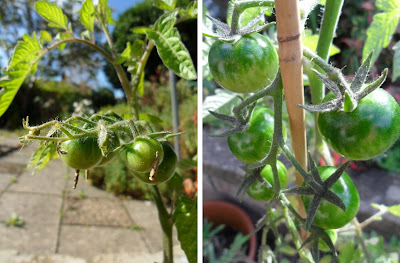 I saved a couple of the sunflowers from my mother’s garden, just in case they turned out to be Jerusalem artichokes after all. I waited till the plants died down but there were no signs of those delicious tubers. 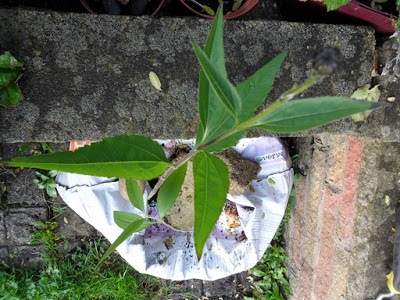 Rainbow swiss chard was effortless to propagate and grow. Unfortunately I missed picking them in their prime. I’ll definitely be growing this vegetable again next year and hopefully I’ll get a chance to try a Giorgio Locatelli recipe where he stuffs the sauted leaves and fontina cheese between sections of the stalks, then coats them in egg and breadcrumbs before deep-frying.

Finally the dwarf flowering quince only produced one mature fruit this year, despite flowering excessively and initially presenting a promising number of babies. Does anyone know if you’re supposed to pick off some of the fruit so that the bush can concentrate on what’s left?

I didn’t intend to grow edible produce when I started gardening, but year by year I’m getting hooked onto the idea.
©Copyright 2012 b-a-g. All rights reserved. Content created by b-a-g for http://experiments-with-plants.blogspot.com/2012/12/harvest-26-dec-2012.html
Posted by b-a-g at Wednesday, December 26, 2012

Could eat baked potatoes every day of the year and be happy but can't stand the smell of tomato ketchup.

Only mega-millionaires are able to lure woodlice from potatoes because only they can afford a house beside each plant.

Enjoy the rest of Christmas and have a very happy (and experimentful) 2013.

Vegetable gardening is addictive once started...it looks like you are doing a bang up job b-a-g!! I am still trying to master chard as my weather did not cooperate but that recipe sounds so yummy I am going to grow chard again just to try the recipe.

You did get a nice harvest. Pumpkins grew in my compost this year, and were harvested to become pumpkin pie. As a Master Gardener, I have to tell gardeners here that they are not to grow potatoes that develop in compost from peelings or those that develop sprouts. Cornell is afraid of potato blight that will spread and affect cash crops.

Nice harvest there! If we had more space then would definitely grow vegetables in our garden, as well as more ornamentals. Enjoy the rest of the festive season and have a wonderful New Year ahead :)

Oh, pink potatoes! My cousins used to add ketchup to their mashed potatoes, but we were never allowed to even give that a try! How nice of your mother to allow you to do that - and smart of her to allow it only in your own home! I'm impressed with your potatoes. How fun to get so many from just one anxious potato. And your swiss chard looks beautiful. I just love the way this plant looks, but we don't care for it, so we don't grow it. Like you, when I started gardening, I never thought about growing vegetables, but once I got a taste of it (pun intended), I enjoy it more and more.

Like you I always buy potatoes, garlic and onions as a kind of minimum supply for my kitchen. Unfortunately I can't eat potatoes (and bread and many other things with sugar :-( ) and my potato supply is going wild! I might try your way of growing them in bags, I think it is very clever and smart and ecological. Instead of wasting food you multiplied it.

Nice harvest you got, I don't grow any vegetables myself, just a few herbs but I can appreciate the work you have done. Hope you are enjoying the Christmas Holiday, all the best for 2013.

My favourite meal is jacket potato, beans and cheese, but I also add a sponful of pickle or coleslaw, maybe this sounds yuk but it really works for me! My tomatoes grew well in Southern UK, but they were later than usual, and they were under glass so were not so troubled by our awful weather.

Ours are baby potatoes, boiled in their jackets, and turned into potato salad. If the cook has been gardening all day, they'll just be split and dolloped with mayonnaise. I MISS Hellman's Real Mayonnaise. Wonder where/why it's gone?

Hi Bag - Like you, I never intended to grow produce but am finding it very rewarding! I tend to stick with herbs because they are so easy (and non-messy), but I do enjoy a few veg in my little patch. My newest is the Brinjal (egg plant) that is a nice looking plant too and rewarding me with wonderful brinjals!

Wishing you and yours a wonderful 2013!

I'm definitely going to grow swiss chard too, so I'm happy to hear it's quite easy. If you get stuck with green tomatoes again put them in a dark cupboard, I did that with mine towards the end of the year and it worked a treat! Best wishes for 2013 :)

glad to meet a fellow pink mash maker b-a-g - what a larder you obtained from your discards. (the best tomatoes I grew self-seeded on a compost heap). Chard is as pretty as an ornamental but too tough for my palate unless finely shredded. Wish you more happy experimenting in 2013

I didn't even realize that dwarf quince produced fruit. Mine hasn't so far. I planted Swiss chard in March and am still harvesting it. The older leaves are great for chopping up and adding to soup or stir fry. Happy New Year.

"Jacket potato" sounds so cute, like clothes for vegetables. (hat carrot? trousers cucumber?) I guess I'm used to calling it just plain old "baked potato"-- And I've only seen catsup used as a dip with the deep fried ones ("French fries")

We eat a lot of potatoes too and I've never properly grown them in the garden. You inspire me with that compost trick-- I will try something contained like that next time I think. Happy New Year!

Congratulations on your harvest! Like you I didn't intend growing vegetables when I started gardening, but now wouldn't think of giving up my kitchen garden. Haven't tried growing potatoes though. Maybe next year ...
Happy New Year b-a-g! P. x

Thanks all for your comments and season's greetings.

Donna GWGT pointed out that growing potatoes from kitchen waste is not allowed in her state. I'm not sure if there is a similar restriction in the UK, but as she points out it's a better idea to buy the blight-resistant seedling potatoes on sale in garden centres.

Esther - I think even mega-millionaires would find it difficult to encourage woodlice to live in a mansion rather than a bag of potatoes.

Diana - That mayonnaise is still available in the UK (and my fridge) in different varieties too.

Holley - Swiss chard tastes great if you treat it like bok choi and stir fry it with soy sauce and a few drops of sesame oil.

Welcome to the addictive world of growing edibles! It creeps up on you and can then take over... I wonder if there is a particular kind of potato favoured by woodlice, such that the appearance of half of one nearby other, less attractive tubers, would protect the ones you want to eat? Not sure how you would conduct an experiment though...

What a fantastic harvest. That rainbow swiss chard is absolutely stunning. I planted my own from seed for the first time this year, and I am crossing my fingers that something edible turns up :). Growing edibles has always intimidated me as a new gardener, but hopefully I'll have as much as luck as you.