There are shrubs that just live in the garden, extracting nutrients from the soil, like the inherited camellia bushes. They stand inanimate, with their dark, glossy green leaves on show all year round then burst into flower without any attention from me. It makes no difference to them if I exist or not. 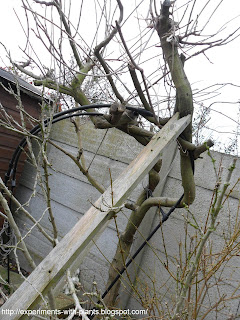 Creeping plants, however, are truly alive and responsive. I gave birth to my morning glory with some difficulty. Despite a shaky start, it developed into a fine flowering climber, more exquisite than the camellias beheld in it's parent's eye. It grew obediently, casting a new coil around the washing line post every day, just as I had hoped for, without any guidance. The canary creeper was a naughty one, diverting into the rose bushes whenever I wasn't around. I was sad when they both died in autumn.
Then there's wisteria, a member of the pea & bean family Fabaceae, which I would describe as dictatorial rather than responsive.  In fact in some US states it is classed as invasive, though in Japan, where there is a specimen reported to be over 1200 years old, it is reverred for its longevity.

Wisteria stands apart from the other plants in my garden, in a class of it's own, and certainly has the upper-hand over me. 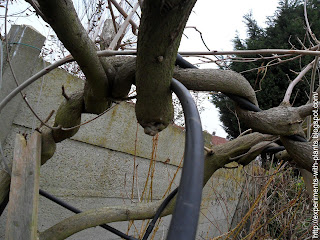 It looks innocent enough, branches naked in winter and vines laying cross-ways, showing off its suppleness, contorted limbs forming a confusing optical illusion. There is some order in the chaos though, the branches always twist in an anti-clockwise direction typical of Chinese wisteria. The green, fleshy vines which sprouted in the summer in search of higher support to reach closer to the sun, have hardened to the stiffness of bamboo over winter, the leaves which fell in autumns past fertilise the roots.  I'm not sure how old this plant is, but there is evidence of initial attempts to train it, several years of neglect and recent brutal amputation .... 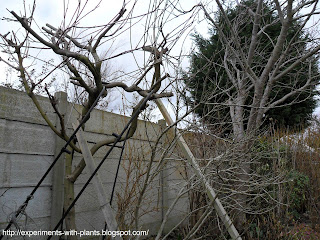 When I first arrived in the garden, I didn't take in all of the details, I had too many other things on my mind at that time. I just saw foliage at the bottom of the garden and a lop-sided cherry blossom tree. After the cherry had shed its initial pink pompom blossoms, it flowered again more profusely but with cascades of flowers like lilac sweet pea. It was the most beautiful thing I'd ever seen at such close proximity and I could hardly grasp that it belonged to me. Everything was blissful in the garden for a short while, until someone pointed out that the lilac flowers actually belonged to the neighbouring wisteria which had overgrown and taken hold of the cherry tree. 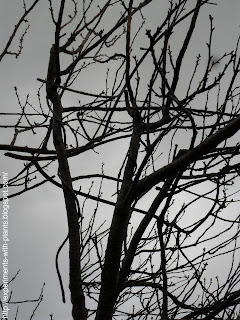 My reflex action was to masterfully hack down the wisteria, as soon as it had finished flowering, until it stood forlorn in submission. Some of its upwardly twisting vines still remain to tell the tale, clamped by rigor mortis around the cherry branches. I didn't stop to think that the wisteria may have been left to grow into the other tree on purpose, utilising it as a support. (This is a recognised technique, though it can result in sacrificing the health of the supporter.)  Last year the foliage grew back bushy despite the culling, but the plant expressed its dismay by producing just one stem of flowers to show me what I was missing. In retrospect, I must have been in need of some sort of stress relief during that period of my life, these days I would pause for thought before executing such butchery. It is advised to prune wisteria at the beginning of the year and in the summer, but I'll be leaving it alone, as the edges of the branches cut 18months ago look rotten and the bark leading up to them is squashy, I've done enough damage. I should have paid more respect - the wisteria will be the master from now on.
References :
The Human Flower Project is a brilliant web-site that was started in 2004, reporting on the relationship between humans and plants in the style of news bulletins.... This article highlights news stories concerning wisteria and describes how to identify if your wisteria is Chinese or Japanese.
http://humanflowerproject.com/index.php/weblog/comments/grow_a_landmark_wisteria/
As some of the links in the article above are no longer valid, I've found these more recent links. ..
http://www.hgtv.com/landscaping/wisteria-has-a-long-tangled-history-in-the-us/index.html
http://www.flickr.com/photos/nomunak/4585336885/
How wisterias evolved ...
http://www.gardenadvice.co.uk/advisor/plants/wisteria/

I have a very large wisteria vine trained along my front porch. If I waited to prune it when the experts advise, my front access would look like Sleeping Beauty's castle after she went to sleep. I swear I can see it growing. That being said, when I prune I just take out whole new runners back to where they are attached. Good luck with yours. Carolyn

Really hard to hold them back. They are tenacious.

I wish I could grow wisteria here twining their vines on my pergola. They look so enchanting, like a fairy tale garden reminded me of Monet's garden. Looking forward to see your wisteria in spring.

Carolyn - I like the idea of Sleeping Beauty's Castle!

GWGT - It's probably the fact that wisteria is so challenging that makes it my favourite.

p3chandan - Hopefully, the wisteria has forgiven me and will flower this spring.

Wandering off topic, delighted that you are in the same alphabetical slice of Blotanical that I check each day. I once asked Mr Blotanical if we could have a date on those chronological lists ... since you include the date in your post title ... I have what I asked for. Thanks ;~)

winters are getting milder so I might plant one this year. I won't hold my breath but I'd love to have one.

...and well away from the house. Even small tentacles will pull siding and shutters from a house.

Prince Charming would still be blowing kisses if a wisteria had gotten hold of him.

Thanks Diana - If it wasn't for Blotanical, no-one would know that this blog exists.

wiseacre - Yes, I was surprised when Carolyn commented that she grows a wisteria on her porch, but she seems to have it under control. And Yes - I am enchanted by fairy tales ...

I think it is safe to say that in Scotland Wisteria is absolutely revered. I think this has to do with the cool climate where some may have difficulty in getting the best out of this climber.However, planted in a sunny sheltered spot, fabulous.

Wisteria runs rampant down here and covers whole trees and takes down fences while look lovely the whole time it is doing its thing. I'm sure it will come back. Wisteria is tough and needs to be controlled.

Good luck, plus I love it so.

Hi Alistair - Just read the wisteria post on your site. I hope mine flowers as well as yours.

Lifeshighway - Yes, I'm sure wisteria has a brain of its own or at least an eye to look for things to climb onto.

B A G, The Wisteria on my post, on this occasion it was about my experience with Wisteria in Aberdeen in friends gardens. I have never grown it in my own garden, but look after one in a town garden in Aberdeen. I wrote this post four years ago and was thinking of bringing it forward with an update.

Alistair - Please do! I always learn something new when I read your posts.

Hi b-a-g - At first shocked that you could be so ruthless with what is a blue sensation but a bully vine nonetheless. My own experience is the opposite - having planted a whip of a Wisteria it was either depredated or swamped by a native lonicera. Only last year did it get going but still no match for the glory that yours once was.
Laura
P.S. and just to add I really enjoy your writing style so do keep those posts coming ;)

Laura - The advantage of starting from scratch is that you can nip any bad habits in the bud - you'll have to be quick though.
Thanks for the P.S. that's quite a compliment coming from you.

oh those wisterias. I was warned once many years back that to plant one is misery and I should think twice about it before doing it as they've been known to grow up and pull down the houses they've attached themselves too. I've yet to take the plunge and buy one but I'm still interested because there's just nothing like those blooms.

Marguerite - I treat my wisteria more like a pet than a plant. If you pull off the runners as Carolyn mentions above, you can easily keep them under control (it only takes 5mins), but you need to do this at least every week in the summer.