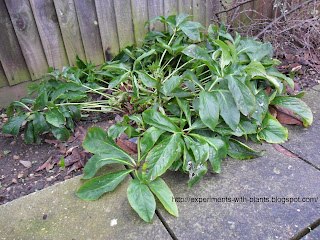 In late autumn, when the excitement of the flowering season was over and I was taking stock, I saw this sprawling mess of leaves in the suntrap area of my garden and thought that I should get rid of this plant, and its partner growing in the shade, at the soonest opportunity. I had never watered them and didn't know their name. They were out of proportion with the rest of my garden, were taking up a lot of ground space and were an ideal hiding place for slugs & snails. I had vowed that I would keep all of the plants that Dorothy had left me but these were more weeds than garden plants, surely. I just needed to find something to replace them.
Then it snowed and I hoped that Mother Nature would do me a favour, but she didn’t.


A couple of weeks ago, I was inspecting fox damage in my garden, when I spotted a pinkness amongst the leaves. Nestled in the centre where the leaves splayed apart were dark pink buds in one and pale pink in the other, which just goes to show it's all about timing sometimes, by beating the spring bulbs they captured my attention. I took a quick photo and asked Mr. F at work if he could identify it. Being a lawnsman, he didn't have a clue, but he printed it out to ask Mrs. F that evening. At the printer, he met a woman who gave her diagnosis.    "Oi, Big Nose – it's a weed" he declared as he returned to his desk, which I accepted. 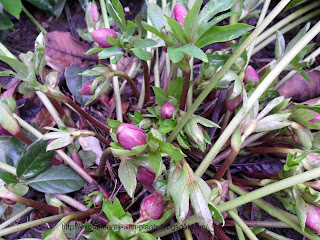 The next day Mrs. F reported that it was "Lenten Rose, Hellebore - a lovely plant".
The morals of this story are :
(1) Don't take advice from women you happen to meet at the works printer, not about gardening anyway.
(2) Have faith in your wife, especially if she is a gardening expert.
(3) Even the ugliest amongst us can shine if we pick the right moment to flower. (I just made this up, but I'm sure there's something that can be learnt from the hellebore.)

I looked up hellebores on the internet to classify my sub-species and found : http://www.hellebores.org/
Hellebores are from the buttercup family (Ranunculaceae) and fall into two main categories stemmed and stemless. They say that most plants bought in garden centres are likely to be hybrids of the stemless varieties (ie. flowers and leaves grow separately from the underground rhizome). 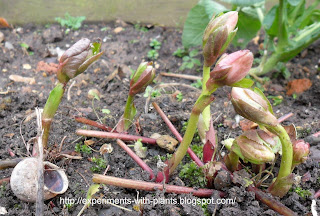 However, this can be a bit confusing because these species sometimes grow leaf bracts around the flowers to help attract insects, which can be seen in my photos, the little leaves which look like extra petals. However, the  true leaves in their photos looked more refined, which made me wonder if mine were hellebores after all.
Then googling "photos of hellebores", I found a picture with coarse leaves (I hope she doesn't mind me saying) similar to mine in Greenforks blog. She advised cutting back the leaves because it makes the plant less susceptible to Hellebore Leaf Spot, which I did, uncovering a snail graveyard in the process, but the flowers now seem exposed and vulnerable, and appear to have frozen in their bud state during the bitterly cold spell this week. 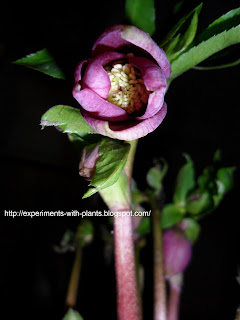 The advantages of the stemless hellebores is that they live longer and they can be split and replanted successfully. (You have to be quite brutal because the root ball is woody and the roots grow down deeper than you would expect.)  I confirmed this because some of the buds above are now growing in Mr&Mrs F's front garden - just another experiment (you are supposed to wait till after they flower and split them between late spring and early autumn). I also brought some indoors in a pot to encourage the flowers to open before I published this post, but they didn't and I couldn't keep delaying ... so let's say there was some digital enhancement involved in producing this photo (ie. I opened it with my finger). Please visit Charlotte's Plot to see a lovely photo of a hellebore opening by itself and Carolynsshadegardens "Ode to Hellebores" to admire the work of a dedicated plantswoman. I think mine might be a bit closer to their ancestors than her specimens, having said that, those huge, glossy evergreen leaves, like hands reaching out, don't seem so ugly anymore. I think hellebores are growing on me.
Visit www.appalachianfeet.com/ on the first Monday of every month to read posts about Great Plants.
Posted by b-a-g at Sunday, January 30, 2011

Dear BAG, Believe me, this discovery of yours is only the beginning of what will, I am sure, become an addiction. Hellebores are such wonderful plants and of such variety that one cannot help but be seduced by them. They are incredibly resilient and always herald the onset of spring. Any garden without them is a poorer place. Cherish your hellebore and seek out more so that you can have the excitement of watching how the seedlings develop.

Hellebores are one of my favorite plants because they bloom in winter when there isn't much else going on in the garden, they are incredibly hardy and there are so many varieties to choose from you can never been bored with them. I am sure you will become addicted to them too.

I am sitting at my computer giggling with happiness because no one has ever called me a plantswoman before, and I am so honored. Hellebore leaves are wintergreen (an evergreen perennial). They usually look beautiful in the fall and often through most of the winter. From looking at yours, I would say they are in a spot that gets battered because it's too narrow. Hybrid hellebore clumps can be 3-4' wide. No offense, but the soil looks like it could use some compost too. Move your plant as soon as the ground can be worked to a spot with more room and better soil. You will soon be an addict. Thanks for linking to my post. Carolyn

BAG, you too. I must be the only person in the world who does not have a hellebore. I will get some, of yes I will.

Great post. I never seen this plant before, but it's give me new information and great knowledge to me. Thanks for sharing ;)

Edith & Karin - they certainly are resilient. I have yet to be seduced or addicted, maybe when/if the flowers open.

Carolyn - I don't think you'll find anyone at Blotanical who'll dispute that you're a plantswoman. Thanks for prompting me - I really do need to improve my soil quality.

Lifeshighway - According to Carolyn you would need a plot 3-4foot wide to plant a hellebore. Just think how many gnomes could live in that space!

Orchid de Dangau - Your orchids are so beautiful, I'm surprised if there is anything that I can teach you.

b_a_g, you are right. I never thought about their potential as gnome habitat. I eagerly await your next submission to The Yard Art Game, although the piggy waterfall sets a very high standard. Carolyn

Hi bag,Yes I hate the leaves of the Hellebore at this time of year, and it appears that most gardeners cut away the old leaves to make way for the new. I am also pretty sure you will end up cherishing this plant. Thanks for sending me your garden pictures, I have added them to my site.

I agree with Alistair that you will likely grow to cherish this plant. They're on my favorites list not only because they bloom early but because the blooms are so beautiful. I do cut away the old leaves each year as new ones begin to form.

The latest issue of How to Find Great Plants is here and your foxgloves post is listed. Thanks so much for participating, I hope you will again next month. Here’s the issue:

Very funny that the woman at the printer thought hellebores were weeds (although I suppose every plant can be a weed if it is in the wrong place).

Carolyn - I held you in pretty high esteem before, but now I discover that you play the Yard Art Game, you have my total respect.

Alistair - Thanks for posting my photos on your site.

Ginny - I'm still waiting for them to bloom, I hope they do.

Eliza - Thanks for including my post in your Great Plants carnival.

I'm rather envious of your snail cemetry hellebores as they seem to have managed beautifully without any assistance. Mine seem to be coming up with blooms already sniped at
Laura

I have two Hellebored, pink and white. They have huge blossom and smell really good!

Lovely plant! I am sure it will have an amazing bloom.

Laura - I think the snails enjoyed living under my hellebore leaves so much that they didn't eat them, they devoured my broccoli leaves instead!

Ellen - I didn't notice their scent, I'll have a sniff next time I peer at them.

Fer - They are just beginning to open now. The beauty of these drooping flowers is that you have to look up at them, then the light shines through and makes them even more beautiful.