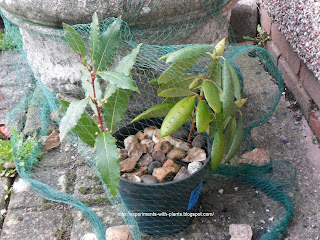 My mother used to be a gardener, not in a prolific or overtly passionate way though. Her garden flourished gradually year by year. In fact, till my late teens, I was under the impression that she approached gardening as an extension of housework. Then one day I pruned her rhododendron bush because it kept getting tangled in the drying laundry. When I saw her almost in tears, too upset to scold, it dawned on me that plants meant more to her than she let on, however she's been suffering from kidney failure for the past few years which has distracted her attention. I try my best to maintain her garden (under her strict supervision) and to keep her interested in it, entertaining myself with a few experiments in there too, but this blog is about my own garden (where I do as I please). 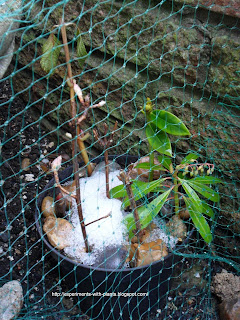 These photos show the cuttings that I have taken from her garden to nurse in my own : pink rhododendron & lace-cap hydrangea, peachy tree peony, white & mauve magnolia, bright orange azalea, green-leaved pieris & culinary bay.   Please note the fox protection, it's worked so far (Promise to my Garden no.3 - see previous post).   I'm not sure if the cuttings have rooted or just been preserved by the cold, but they are looking healthy after a couple of months. I haven't given them a gentle tug to check for anchorage, as I would have done last year, because I'm going to trust Mother Nature and leave them be (Promise no.? - OK, I'll stop going on about the Promises).   By taking a cutting and rooting it you are guaranteed to reproduce an identical plant to the parent. On the other hand, to combine desirable (or undesirable) characteristics of two different plants, sexual reproduction or hybridisation needs to take place, which occurs naturally with the help of insects transferring pollen from one flower to another.  Most garden plants were originally hybridised from their wild ancestors, developing them to be bigger, with more attractive flowers and more disease resistant by careful selection of parents with particular genes.
I knew roses have been bred for centuries, hybrid teas probably the most renowned, and found a couple of articles which have been written so comprehensively, that when read together, even a novice gardener could follow the step-by-step instructions to carry out their first trial in rose-breeding :
How to Make a Brand New Rose by Jim Sproul
Germinating Rose Seeds by Dr. Malcolm Manners
To summarise, here are the key steps :
(1) When a rose is half open, remove it's own pollen sacs to turn it into a "mother".
(2) Collect powdery pollen from a different "father" rose and wipe it onto the sticky central stigma of the "mother".
(3) Wait for the rosehip fruit to develop & ripen, then cut it open and remove the seeds.
(4) In cold climates, store the seeds wrapped in wet tissue, sealed in a plastic bag, inside a fridge.
(5) After a month, check the seeds every week, replacing in the fridge till little roots can be seen.
(6) Plant the rose seedlings in soil.


I planned to try crossing my blood red and pure white roses in the summer, just to find out if they would produce pink or raspberry-rippled babies. I assumed that I could use the same method to breed foxgloves, but wondered if anyone had already dabbled in this specific field of botany.  My suspicion that every thought that one could possibly think has already been thought about and posted on the internet was soon confirmed. I found two scientific papers written by the same person Wilfred Ernest Warren in 1917 & 1922. I delved further, and was stupefied with disbelief when I discovered that he was an engineer, who was keen on foxgloves, bred them and took measurements. He hypothesised that the conclusions from these breeding experiments might help us understand inherited diseases.
OBITUARY:
WILFRED ERNEST WARREN
(1896-1976)
Wilf Warren died suddenly on 6th May, 1976, shortly before his 80th birthday. By profession he
was an electrical engineer but since childhood he had a great interest in natural history, botany
in particular. His ﬁrst notebook was written up at the age of 7, and in adult life (in addition to
meticulous botanical records) he kept a naturalist’s diary which makes most interesting reading.
His last task was to bring this up to date.

We think that we fully know those dearest to us, isn't life a journey of learning. Don't touch those cuttings now, I know what its like. As for your comment that you may be going through a phase, I doubt it, I have been going through it for 42 years and I am as excited by this coming Spring as I was back in 1969.

Your description of your mother really struck home. My young son saw a vine climbing one of my dogwoods and decided to cut it at the base because I was always pointing out strangling vines (they were oriental bittersweet). You can imagine how upset he was when I burst into tears at the sight of my carefully trained wisteria withering in full bloom for the first time.

I think in my family my grandparents are the ones with the most passion about gardening. My grandfather used to go every day he could to take care of his roof garden, even until his last days with us. And my grandmother still does now. But the garden is four floors up! and they only have stairs.

Alistair - I'll take your advice, I gather you know a thing or two about gardening!

Carolyn - I was lucky enough to inherit a wisteria tree from the previous owner, I'll feature it shortly. Sounds like your son has got the gardening bug already - a wonderful gift that you've given to him.

Elephant's Eye - Thanks for the link. I didn't know roses flower when they are so young.

Fer - I'm convinced that gardening makes people live happier & longer. I wonder if we'll still be blogging about gardening when we're as old as your grandparents.

Dear BAG, Your plant propagation techniques look very advanced to me and quite beyond anything that I could reasonably attempt myself. But, how exciting it is to create new plants from old and to anticipate what one's new varieties may look like.
Reading what you write about your mother I conclude that gardening must be in your genes. I await with interest the outcomes of your experiments.

I am pleased to have found you in the labyrith of Blotanical and hope that you enjoy being part of this very varied and interesting community.

Hi BAG - have been following your posts for a while and this one is intriguing. Extending engineering to plant manufacture! Wilfred Warren obviously lives on
Laura

Edith - Thanks for your comment. I'm still getting used to people reading my writing. When I was small my father used to tell me that if I wrote a book, he would "deal with the rest". He doesn't know about this blog though.

Laura - When I wrote this post I wondered if anyone would have the patience to read beyond the photos, right to the end. You passed my test with flying colours - and you got it!

There must be some connections to engineers and roses. My brother is an electrical engineer and the only plants in his garden are roses. I have a good friend who is a rosarian and a chemical engineer. He raised many unique roses. I have been following your blog and find what you have been posting very interesting.

Thanks, GWGT
I'm following your blog too. As the garden is almost a blank canvas at the moment, I've been thinking about applying some of your design ideas - even a plant laboratory needs some organisation!