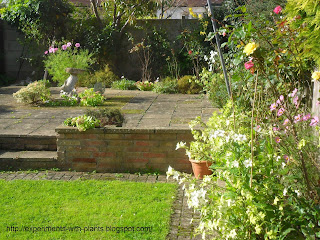 This photo was taken in October 2010, just before the first frost. I look at it when I have the winter blues and think happy thoughts but ... What would I have done differently?  Did I achieve my goals last year? – well, none of the ones that I set in January, but they weren't about gardening, I didn't know that I would be gardening then.
At the beginning of last year, I invited Mr & Mrs F. to check out my DIY modifications as Mr F. had taken an amused interest. He had a word with Mrs. F and returned with the reply, that they would come round when my garden was in bloom because she was a keen gardener. I couldn't predict if the garden would bloom at that point, but in early spring I saw it had potential because the bulbs were flowering by themselves and a bush was covered with salmon-pink blossom. Prior to their visit I had bought a few packets of seeds, seed trays and compost. Mrs F. inspected my weedy garden and offered me some more plants. That's how it all began, I didn’t visualise an ending and I'm glad I didn't, I just enjoyed the journey (as they say).
According to Steven R. Covey's "The 7 Habits of Highly Effective People"  - Powerful Lessons in Personal Change (I didn't buy this book, it was given to me, say no more), these are the steps to achieving your goals :
- Start with the end in mind (Steven talks about imagining what people would be saying at your funeral – don't worry I wont go that far) .
- Write down your goals eg. on a pocket-card to carry around with you.
- Visualise & dream about your goals. Tell the world.
This post is in effect my pocket-card of gardening resolutions for 2011, promises to my garden actually, but I wont be setting any goals : 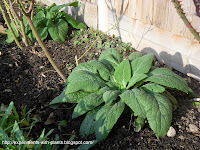 Experiments with Plants will continue - no display-ready plants will enter my garden unless they are presents. The foxglove measurements will be tabulated and correlated with flowering performance (if they flower), effects of other factors may be estimated but more about that later in the year. My ultimate foxglove experiment (which I think about almost every night before I go to sleep – I can't even remember what I used to think about before) would be to create my own foxglove subspecies. 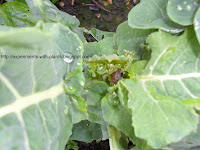 Live and let live with the Slugs & Snails – i.e. continue with the organic gardening philosophy. I have proof - it works!  I'd like to grow some vegetables this year in memory of Geoff Hamilton, my TV gardening role model. Just hope the alien slug (big, burnt orange & ribbed) doesn't make another appearance. 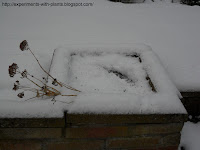 Don’t be angry with the fox, just be more sly – I can't believe it was trying to scratch out my bulbs even when it was snowing. The major mistake I made was clearing stretches of soil and just planting bulbs in them. The fox has used these areas for its convenience (to put it politely). This year I have bought perennial plant seeds as well as annuals for better soil coverage next winter. (Hopefully it doesn't use the lawn instead.)
Any advice on this problem would be gratefully received. 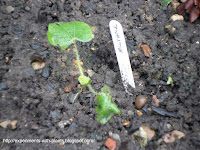 Have trust in Mother Nature – there is no such thing as failure in the garden. I was too quick to give up and pull out apparently hopeless plants last year.

One lucky survivor, my "giant" hollyhock germinated last spring and is still less than 2 inches tall, but at least it's still alive.  I have a soft spot for it, sympathising with it being a late developer.

Use the Garden to do Good Work - which will have an impact beyond the garden, myself and my life. This sounds like an unachievable goal that I have set for myself, after I wrote that I wouldn't set any. It's not a goal, more a way of thinking.  Last year things that I thought were impossible (unexpected at least) happened in this garden, or because of it, but these were mainly concerned with my selfish fetishes. Who knows what the future holds if I start this year with an altruistic mind-set.

at my little garden in japan

Continue to measure the foxgloves because I find that adorable and quirky. I am a sucker for quirky.

I like your catchy pocket-card goals and the philosophy behind it. Our hollyhocks too won't grow tall for us but I try to trust in Mother nature much faithfully.

I like your "have trust in mother nature". Last year we had an awful growing season in the Pacific Northwest. Bad rains were disappointing and discouraging. I'm glad I didn't give up on my vegetable plants. In the end it all turned out okay. Great advice!

Hope you achieve what you target this year, you have a lovely garden I can see. Happy gardening!

Your fantastic enthusiasm takes me back many years to when I first got a house with a garden. Wish you happy gardening which will now be with you forever.

Thanks for the compliments - LifesHighway & p3chandan

Malay Kadazan Girl & Holly - Yes, it may seem that Mother Nature sometimes works against us but she is just testing our dedication.

Alastair - Sometimes I fear that this is just a phase that I'm going through, but then I see people like you, proof that a passion for gardening can endure.

I am sure you will be able to keep all your promises to your garden!
Love the "trust mother nature" and the little goal cards. I will try following some of your example.
Wish you the best in your projects

Thank you Fer. I wouldn't have thought about gardening resolutions if it hadn't been for your blog carnival.

I am very happy with my fox around here because it keeps the rodent population in control. I have never had them dig or do any other damage though.

Carolyn - I haven't actually seen the fox in action, I'm just guessing from the size of the gifts that it leaves behind.

I love your garden promises. My daughter at one time wouldn't let us get rid of the slugs because they were so cute. And we have our resident fox that runs through the yard early in the morning. We have let him his way and hope that he behaves once we have our chickens. Stick with your promises for they are good ones. cheers. ann

Great post! I love your plant experiments..keep us posted. I haven't had problems with foxes, but the deer are very annoying. Last year I made a repellent out of eggs, garlic, pepper...it actually work-hopefully it will this year too. Good luck with all your resolutions!

I love your garden goals, especially the altruistic one. I bet you do better with this than you think -- what gardener doesn't freely offer advice (and excess plants) to people just starting out? We like doing it so much that we forget how helpful we found it when we were newbies.

I wanted to invite you to participate in the blog carnival How to Find Great Plants. If you're interested in submitting a post, here's how to do so:

If you don't have time to write a new post, some of the posts you've already written (such as the ones on sedum, quince, foxglove, or primula) would fit right in.

Rebecca - Thanks for the compliment & repellent recipe, but I'm pretty sure my fox would think I had invited him over for breakfast.

Eliza - Yes, I love to give plants away and see them growing in other people's gardens. I submitted a post for your carnival.