Last year I grew a lavender bush which flowered twice. Cuttings from this plant survived while the rest died so I pencilled it in as a contender for a spot in the border of an imaginary courtyard; freely-reproducing plants are most welcome in my real and unreal gardens.
﻿﻿﻿﻿

Care-free, I pruned and removed some woody branches from what I believed was a robust, reliable specimen, intending to rejuvenate it. I hope that this didn't cause its demise but suspect that it probably did.

Pruning doesn't seem to have harmed the lavender garden in my local park.
Recently trimmed bushes have already produced fresh growth in October.
﻿

Back in July, the view and scent wafting through an archway leading into a space almost completely dedicated to lavender, with just an accent of white roses, persuaded me to ink it into my Dozen for Diana list (tried, tested and true plants to start a small garden from scratch). Please don't be put off by my own failure, I'm convinced it's a one-off ... remember that it did flower twice beforehand. 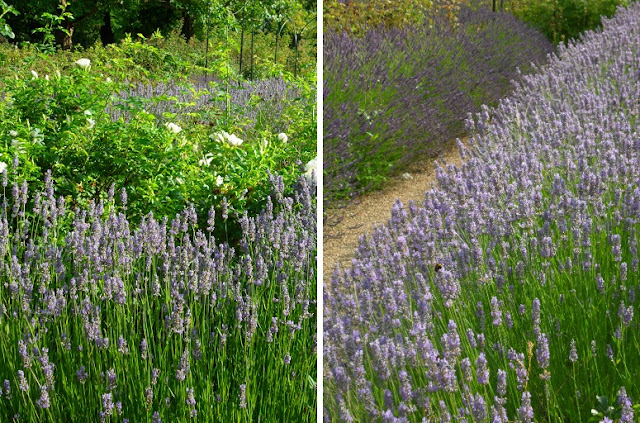 Whoever commissioned this garden in the middle of a public park deserves an  award.
It wasn't just the sight and the scent but the sound too. Intoxicated bees were not bothered by an equally overwhelmed human stumbling along. This small space was humming to the point of vibration.
What would it be like to walk through a whole field of lavender ?

The idea of planting lavender fields for harvesting essential oils originated in ancient times. The Egyptians and Romans used it for embalming, freshening the air and as a tonic.

Today it's cultivated for the aromatherapy and perfume industries. Though it has never been proved that scents like lavender have healing properties, it's effect as a mood-enhancer with a strong placebo effect can't be denied. Scientists discovered that there is a direct link between the olfactory system and the part of the brain which concentrates on emotional learning and memory. In fact, just a whiff of lavender transports me back in time to the warm, sunny day when I took the photos above, when I had nothing to worry about except whether they were in focus.

It's claimed that levels of the more potent chemical compounds in true lavender oil increase with altitude, like wine. Lavendula angustifolia of the Haute region of Provence in France has been designated appellation d'origine contrôlée as long as it grows at an altitude above 800m. (Even so, the lavender in London smells pretty good considering that we are just above sea-level.)

For beautiful photos of lavender growing in other mountainous regions  try googling images of : "lavender in ..."

These demonstrate that just one lavender bush isn't enough.
My cuttings had better start growing quickly before lavender turns into yet another fantasy plant.
﻿

one lavender field coming up
http://elephantseyegarden.blogspot.com/2010/10/baby-forest-and-earthworms-at-org-de.html

The charming horticulturalist who walked our garden club round, explained how to prune a lavender hedge. First do one side, wait a couple of weeks ... the other side ... the top. Give the bushes a chance to grow some new leaves in between.

But today I just snipped mine back, to above a pair of green leaves, or little sprouts. They were claiming their half of our front path.

I'll make yours the first in my November round, as the October post will not draw many readers now.

Thanks Diana - I checked out your link - useful tips on no-dig gardening as well as pruning lavender. I hope my plant gives me another chance to get it right.

Nothing to beat a Lavender hedge b-a-g. I only found success when I recognised how much they hate regular garden conditions in Aberdeen. The position I chose in full sun dries out extremely quickly I still dug in loads of grit to the soil though and after planting added a thick mulch of grit around each plant. I pruned back the dead flower stems in mid September making sure there was still a reasonable amount of foliage on each plant. Next Summer great results. After four seasons the plants were lifted and discarded this is the acceptable lifespan for Lavender in Scotland. I haven't tried the French Lavender I don't think they are quite so hardy up here.

Lavender cuttings are easy to propagate. You are right, one is not enough. They are too beautiful to not have many. The fragrance, the bees, the color, the texture, you name it, too many good qualities.

Such a lovely plant with so many uses too. Not only is the scent wonderful it is also very attractive in a garden. One is not enough indeed, so taking several cuttings is the way to go :)

Oh, Lavender!! One of the plants I didn't know I needed, until this year. Two of three made it through the drought this Summer. My only regret - that I didn't buy more when I had the chance.

Again we love the same plant. I have many lavender plants throughout the hot front sunny gardens and in the back where there is lots of sun and dry ground. I adore the scent and flowers. I use the scent to help calm me for a restful sleep. Your pictures form the park are so beautiful. I had hoped to grow hedges but alas my weather permits small clumps. I still love lavender anyway I can get it.

I found that my bog standard Lavenders happily survived the last two cold winters - but L. stoechas died during the first year. I will try it again but I think I might keep it in a pot and move it into the greenhouse over the winter

Ah, lavender. The plant of dreams. That garden in your photos is absolutely charming. I can only imagine what a wonderful feeling it is walking alongside the blooming lavender, brushing it with every stride. I'm impressed with your cuttings. I may have to give that a try.

Hi b-a-g! You know you made me feel like planting more lavender? I always avoid the charming stoechas though, cause it's not hardy at all. As well as the Spanish lavender which is pretty but not hardy. There is a nursery here in Italy that only sell every kind of lavender, I always need to force myself not to order those tender plants as I live in the north.
My sister gave me a bottle of lavender essential oil that I'm supposed to use in the bath. I can confirm it has a very relaxing and cheering scent!

Lavender's one of my absolute favourites. I like to use it as a cut flower with sweet peas.

I will say that French Lavender is less hardy and more prone to problems with damp than the 'English' sorts.

Good luck with your lavender cuttings! Lavender is definitely my fantasy plant. i dream of walking through fields of lavender, but it will never happen in my climate. The summer humidity and wet winters kill it. I have tried enough times to know. So I sigh when I see sights like your park and must content myself with store bought lavender sachets.

Your French lavender is not as hardy as your English Lavender. I believe it is around a zone 7. When pruning lavender it's best to go down only by about one third, if done anually this keeps your bush is great shape. Prunning too late in the fall can also be a problem. We usually prune after the blooms start to get looking too ratty and dull, late summer.

Great photos that took me right back to summer-- I could even feel the warmth of the sun and hear those bees among the blooms! Lavender is grown as a crop here in Oregon. When I make handsoap, which I do about evey five years, I use local lavender oil for fragrance, so nice, and the plants are essential in the garden. You inspire me to hedges of it b-a-g!

Lavender and white roses--what a perfect combination! Clean, simple, and sensual all at the same time. I hope your cuttings stay firmly in the "reality plant" camp.

Your lavender failed not because you pruned it but because it is French lavender which is fussier and less hardy than the lavender you show in the other photos. You can spot French lavender by its bunny-ears!! If you want a lavender hedge then go for a robust English lavender. They also dont like sitting in winter wet so I lost a new lavender hedge which was planted in clay when I first moved here.

Lavender is just awesome. Love your pictures of the bees because they just adore it too and while other plants have stopped flowering the lavender carries on and provides the bees with something buzz on. I'm trying to encourage my local park to plant it. I've lost a few french lavenders too but generally find that pruning above the woody part is the best method for a healthy plant next year. But then sometimes plants just behave how they want to hey! Nice blog. I've been really enjoying reading it :)

First thing I planted in my current garden was a lavender walk. It doesn't seem to mind when I prune it back to little balls...still going strong after 8 years. I really enjoyed all of this information about lavender.

Welcome to the new commenters - sensiblegardening, AnnaB and Ricki, I'll be visiting your blogs soon if I haven't already.

Thanks all for your comments.
It seems that the consensus is:
(1) French lavender is less hardy - maybe I'll try English lavender next time.
(2) Prune it gradually so that the plant can still get nourishment from the leaves.
(3) Provide adequate drainage around the roots.

I love lavender, but my dogs never have, so it is not a plant I have grown recently.
I do remember, when I did grow it, that the advice at the time was not to cut into old wood. But my plants quickly became straggly, so not cutting into old growth was not as easy as it sounds.
Have you ever been to the lavender fields in Norfolk?

Prunning makes the plant grow in a natural way, so if there's a lot of unnecessary branch the plants will strive for that and will not produce the quality we need from it. See how beautiful the lavender garden is.

That lavender plant is just a beauty. You did well with the pruning. So, it is safe to conclude that you are a fine gardener.