A couple of years ago my neighbours were going to throw away an oregano plant; it found refuge in my garden. I have a feeling it’s one of those herbs that you are supposed to grow fresh from new seed every spring. The yellow tinge on the leaves suggests it’s stressed in some way, maybe that’s why it flowers like a trooper.


It’s not the best looking plant, the faint pink flowers are so tiny that it’s difficult to distinguish their shape and you can only get a whiff of their scent if you stick your nose right in. 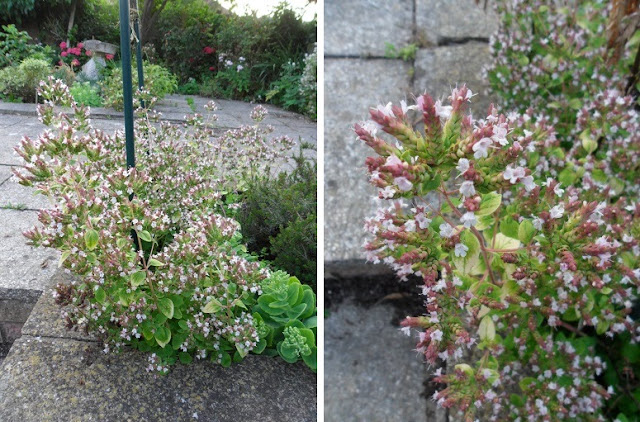 However on hot days, something magical happens. 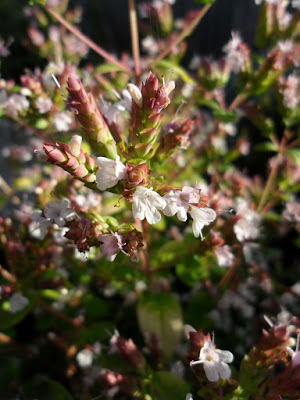 The tiny flowers fill the air with the spicy aroma of pizza.


All the bees in the garden decide that this is the place to be, turning an inconspicuous bush into a vibrating, humming extravaganza.

Meanwhile in the garage, there was another hive of activity. I wouldn’t have noticed usually, but I was in and out trying to fix the front garden wall. Fearing the worst, I called in the council. It took two attempts to remove the wasps nest, costing a total of £60 and two half-days off work. The man said it was a big one; I directed him to check out the internet. On the first attempt he sprayed it with insecticide, but wasps were still returning to it three days later.

Finally, the nest was removed; it disintegrated into weightless flakes, not leaving a trace on the rafters from which it had hung. The whole process made me feel rather uncomfortable because the wasps weren’t doing any harm; they showed no interest in stinging me at all. 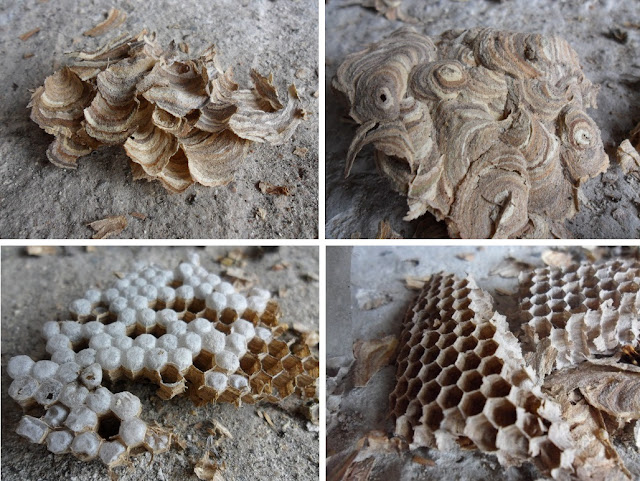 I checked the internet again, to confirm that I’d done the right thing. Apparently, a particularly aggressive queen can pass her temperament to all her offspring. If you have an allergy to wasps, it’s possible to be killed by just one sting. If you don’t have an allergy, multiple stings can be fatal, and one wasp can attack several times. I couldn’t find the probability of these casualties though. Wasps can also chew through building materials.

It was difficult to equate what I was reading to what I saw with my own eyes and my gut instinct. As wasps are territorial, they wont build a nest in the vicinity of another, even a crushed paper bag can be used as a decoy. I’m hoping that an aggressive queen doesn’t return next year and take revenge by building a nest in my loft instead, maybe I reacted too quickly.

Even though they are not as effective as bees, which can trap pollen in their hairs, wasps do pollinate and feed on pests. However, these beneficial aspects were outweighed by my need to protect my own territory. The experience made me question my ethics : organic in the back-garden, not so much in the garage. Anyway, at least one wasp got to feast on the oregano.

Inspired by Linnie’s cult movie Crocosmia for Lunch, I tried to film the goings-on in the oregano bush but it was quite difficult to keep in focus. So here are sections of film reel instead of a piece entitled :
“Oregano – it’s not just for pizza”

Oh great that is a wonderful post! I haven't seen a real oregano in person, the Origanum vulgare kind. We have Coleus aromaticus that we locally call oregano too. I am imagining the smell of pizza. Regarding that wasp nest, OMG, i have been stung by some a few years ago, and the ithiness stayed for a month. Maybe i developed moderate allergy already. Then just last week, of all areas, here in my bed in the city at the 5th floor, something stung my two legs leaving a lot of marks and uncontainable itchiness. I put very hot compress until itchiness is neutralized, repeating the process 3x/day, then 2x/day, lastly 1/day. I looked beside the bed, changed the beddings and found a compressed wasp like that with golden bands. Maybe it was pressed by my legs in the wings and it stung all around it when it can't fly. I can even show you the marks now already almost healed. Good you are safe!

The wasp certainly looked like it was enjoying the oregano feast!

That nest is HUGE!!! I love oregano plants, the tiny flowers are so cute and the smell is amazing. The bees clearly think so too! :)

Thanks for your comments.

Andrea - What a terrible ordeal! ... for you and the wasp. I've had encounters with mosquitoes but I'm not sure which is worse.

What pretty oregano flowers! And it looks like the bees love pizza, too! :) That's an interesting wasp nest. And a big one! We usually kill the nests that are on our house or in the plants that we trim. But, they don't seem to really bother us otherwise, so we have plenty in our garden. I bet you'll have wasps again next year. I hope they decide to nest in a different place, though! Never heard about the crumpled paper decoy!

Good heavens b-a-g, what an enormous nest! You totally did the exact right thing in fighting them. I do doubt you will have a queen next year with revenge in her eyes either-- they don't live long enough for revenge. The oregano salvage was another good decision. Mine comes back every year, always good and smells so nice. Leaves can be dried for pizza! I loved the images of your plant with bees-- sorry the movie didn't work out. Please try again!

Wasps do geta bad press don't they, yet their nests are works of art. Can't say I blame you for getting rid of one right by your house though, the stings are nasty just one at a time, but multiple? No thanks... My oregano always looks scruffy too, but the bees do mob it. It self seeds around as well.

Since I just posted on encouraging bees and wasps to the garden for how much benefit they are in pollination and chewing insect control, I find it difficult to kill off any of them. We have bee keepers here that relocate them, which if any end up in my garage, that is who I will call.

B-a-g I always read your posts with a smile.
That hive was really huge and creepy, I would have done the same thing with no second thoughts. Wasps only forms small hives around my house but often in critical spots, like on rubbish bins, barrel or behind shutters. Thing is that as soon as you approach the bins to throw away some stuff you are attacked, so I have to remove constantly the little hives because they are rather annoying.
I love oregano flowers, not the singular ones but the whole cloud makes a soft and natural effect, I think.
Alberto

My husband carries a can of insecticide with him to kill wasps or other undesirables as he goes. I have tried to convince him of the error of his ways. Wasps do eat aphids and other garden pests. However, I think I may have done as you did if I found a large wasp nest attached to my house. Bugs are welcome, but not inside human territory!

My oregano has spread like crazy in certain parts of the garden and I don't mind as it does smell like pizza as you say. And the pollinators love it.

Wasps are tricky. They can build nests anywhere but the house as it becomes too dangerous as you pointed out.

Enjoyed the post, as always, b-a-g! I am allergic to stings so I believe you did the right thing. I would feel guilty, but at least I wouldn't be afraid to go our of the house. P. x

The.oregano is really a beautiful plant and encourages so much activity. My marjoram and thyme attract similar interest when they are in bloom.

Hmm. I can just imagine the smell of oregano filling the air. No wonder the wasps were attracted. It would attract even me! As someone with severe allergies (same with my wife and kids), I too destroyed the wasps nest I found as a precautionary measure.

I think you did the right thing getting rid of the wasps b-a-g, they are a complete nuisance. I have been stung many times by them. The most recent occasion had my hand swelling up like a balloon and a red line creeping up my arm indicated it was time for antibiotics.