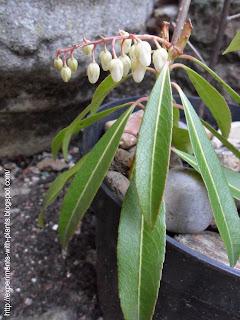 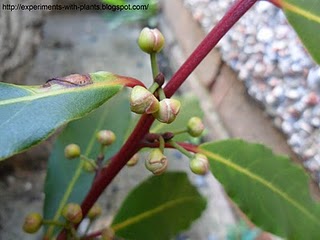 Wouldn't it be ideal if you could cut off a little toe, wrap it up warm in a blanket, then watch it grow into a babe in arms who looked just like you ? - actually,  maybe not .....
Here are cuttings of pieris, bay, magnolia , weigela,  tree peony, azalea, rhododendron & lace-cap hydrangea which I planted at the beginning of winter. The fact that they are all crammed into two plant pots or stuck in with other plants gives an indication of my expectations at that time, but miraculously, at least one cutting of each variety is showing signs of new growth. 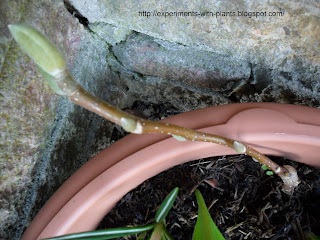 These miracles were achieved by waiting till shoots formed on the mother plants in late November, cutting sections of stem, removing the lower leaves, then dipping the cut stems in growth hormone gel (which contains fungicide). I put stones in the bottom of plant pots, piled on compost, more stones on top to retain moisture, then stuck the cuttings in the spaces between. I gave them a good watering once, then left them outside (even in the snow) until now. I'm not sure if I should try to separate them, possibly damaging the newly formed roots or leave them be and risk the roots of the different plants intertwining.
Either way, just getting this far is a success because I have given the gift of life, by cutting the stems, I triggered hormones called auxins to be released which turned stem cells into root cells.
I have had failures too ....
In the summer I pulled off rampant green runners from my wisteria tree and placed the ends in a vase of water to root. I was so sure that they would because they seemed to have a zest for life but they just went limp and died. Later, I saw a wisteria runner sprouting from the trunk of the tree, very low near the ground and I tried using the layering techinique, ie. half-breaking the underside of the runner and pinning it down into the soil with a piece of wire. This died as well, though I have seen cases of layering occurring naturally in other plants, such as my hebe, a baby plant growing where a branch of the mother plant had bent down to touch the soil.

I think the wisteria cuttings died of dehydration in the summer heat or because I didn't apply hormones  .... which reminds me that using growth hormone gel is probably cheating according to the rules in my garden.   I'm kicking myself that I didn't plant one set of cuttings dipped in the gel and one set without, as a control sample - what sort of scientist am I?   What if the rooting of the cuttings was entirely due to the chemical growth hormones?  Success doesn't taste so sweet now, but never mind I'll set up a controlled experiment next year. 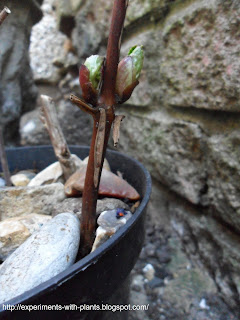 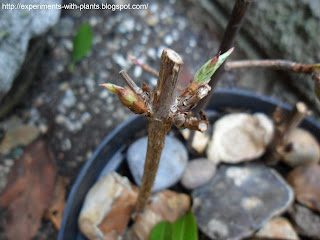 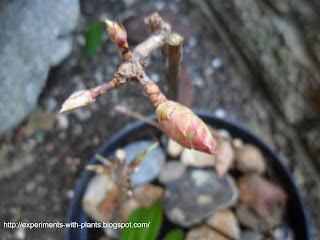 My opening sentence wasn't entirely in jest, by the way. It does seem that the importance of the simple act of giving life has been lost amongst the complexities of the modern world : finding Mr or Mrs Right, choosing between child-rearing or career, being a good role model, creating a stable home, gaining custody or visiting rights, being able to afford the expense of extra mouths to feed and minds to educate. If only it could be as easy for us as it is for plants .... but maybe there is a way, by carrying an organ donation card - giving an opportunity for life by offering a cutting to implant. 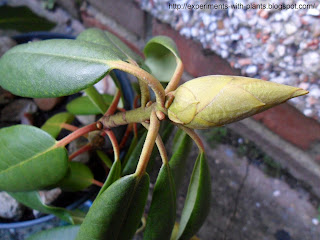 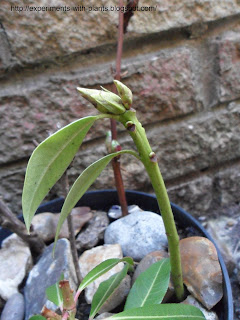 References :
All living organisms begin in the same form: as a single cell. That cell will divide and the resulting cells will continue dividing and differentiate into cells with various roles to carry out within the organism. This is life and plants are no different.
http://www.biology-online.org/11/10_growth_and_plant_hormones.htm :
Plant Propagation by Stem Cuttings: Instructions for the Home Gardener
http://www.ces.ncsu.edu/depts/hort/hil/hil-8702.html
Artificial Vegetative Propagation
http://plantphys.info/plants_human/vegprop/vegpropa.shtml
It is possible to make natural plant growth hormone by boiling up a stock from bark of the Salix (willow) family which is rich in auxins.
http://www.beinggreenonline.com/gardening/make-your-own-natural-rooting-hormone
©Copyright 2011 b-a-g. All rights reserved. Content created by b-a-g for  http://experiments-with-plants.blogspot.com/
Posted by b-a-g at Sunday, March 13, 2011

Great detailed post yet again b-a-g. Your own experiments with the cuttings teach you more than any book would do. I would never be of a mind to think of rooting gel as cheating, just an aid, of course I realise that you are more scientific minded than myself. Now! I was having a good look at your site, wanted to know just a little more of who b-a-g is. I from the start made up my mind that you are a young guy starting off in life's journey. yes?

Hi b-a-g - you have green fingers and toes! A lot of success here with your hardwood cuttings and especially given the stick-in-pot method. Softwood cuttings are easier when the sap is rising so look out for new growth before too long and then just snip and pop. Should not need root hormone - artificial or otherwise though the scientist will no doubt exact an experiment with and without. Single blind study only though unless the planter is blindfolded. Lovely lyrical post about life woven in here too. Pleasure to read
Laura

Thanks Alistair - I agree that rooting gel is just an aid, but I would like to prove (to myself) that cuttings can grow roots by themselves .... I find it difficult refusing to answer a question posed by my adopted mentor, but I can also tell that you relish a good mystery, so keep an eye on my posts and all will be revealed eventually (verbally, of course).

Thanks Laura - and you've saved the day, I thought it was too late to "snip & pop".

I've been hit and miss about using rooting powder. (Haven't tried gel.) My impression is that it really does increase the number of cuttings which survive.

It might be a person-to-plant thing though because I have never done too well with plants rooted in water.

Keep these experiments growing because I like to read about them. In Pennsylvania, when you get your driver's license, they ask if you want to be an organ donor and it goes right on the license. It is on mine!

Esther - What about rooting powder dissolved in water ?

Thanks Carolyn - It's an interesting point that you make - In the UK, it's not compulsory to carry either a driving license or an organ donation card. As there's such a shortage of organs for transplants, there's been talk of changing to an opt-out system where you have to express a wish not to donate - can't see any signs of it actually happening though.

I'm impressed! I lost all my cuttings from last Autumn. The hardwood cuttings just all wilted away before they rooted, the softwood ones I managed to kill off with too much water after they had taken. You have inspired me to not give up. BTW I used hormone rooting stuff on all of the above...

Thanks Janet - I am looking forward to reading about the produce from your allotment.