According to the Meteorological Office, the seasons in the UK are defined in neat quarters, the period from March to May is Spring, June to August is Summer, September to November is Autumn and  December to February is Winter. 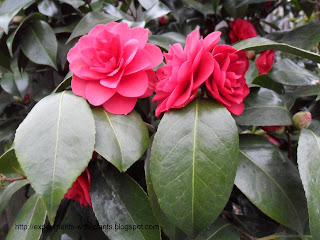 Astronomically, seasons are separated by spring & autumn equinoxes (days when lengths of day and night become equal) and summer and winter soltices (the longest and shortest days of the year). According to these definitions, Spring begins around 21 March, Summer begins around 21 June, Autumn begins around 21 September and Winter begins around 21 December. However in my garden this year, spring quite clearly began phenologically in mid-February, when the first crocus poked out of the lawn (I'd written my last post on winter flowering plants just the week before). Camellia & daffodils were already in full bloom or starting to fade by 21 March. 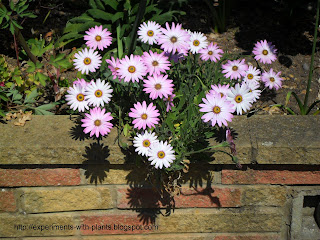 Now as spring turns to summer, the roses and african daises are highlights of the garden. Due to being distracted by my foxglove fetish, I haven't blogged completely as I would have liked the events that occurred in my garden over the last couple of months,  between the camellias and african daises. I just have a few photos to compile into a catch-up post. 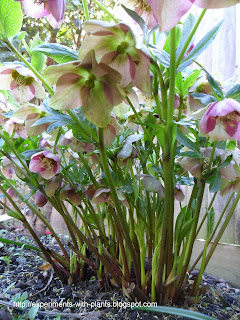 The hellebore leaves first peeked through then totally overwhelmed the flowers. 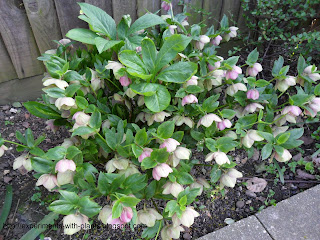 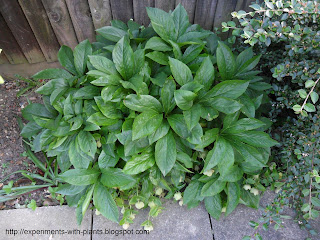 ... reminding me of a scene a few months ago, when I wasn't aware of the identity of this plant and I thought these leaves were so ugly. Now I know it's story ... the leaves are storing food in the extensive root ball so that the plant has the energy to push up buds through the hardened soil in winter. It was a surprise visitor, but next year I'll welcome it back like an old friend. 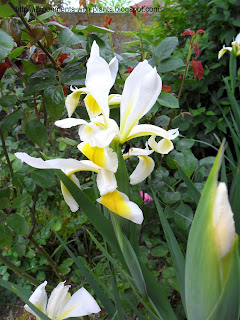 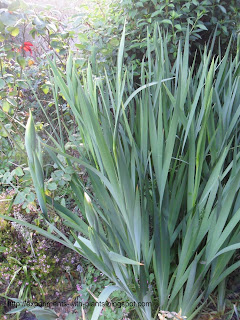 The tips of the iris leaves which pierced through the snow- covered soil have now reached
my height.

The buds disguised themselves in leaf-like sheathes then burst into flower overnight.


I've seen irises with prettier colours than mine, but I have no intention of replacing these as they are part of the history of the garden.


The dicentras resurrected themselves in the spots marked by the dead remnants of last year, just in time to catch the fortnight overlap of the blooming daffodils and tulips. Both dicentras cleverly holding their racemes in horizontal lines, multiplying the weight of each bleeding heart with it's distance from the anchor point in the ground and counterbalancing against the strength in the stems according to the laws of physics. 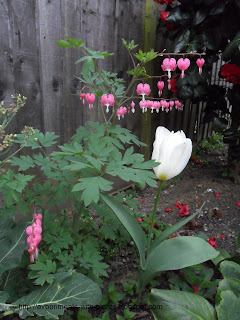 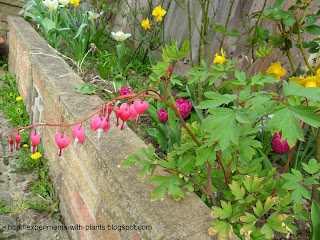 My fear of bees and wasps was cured when I saw them enjoying the nectar in my flowers.
I can't remember exactly when the pollinators arrived in hordes, but they got in the way of my photos of french lavender and allium, sometime after the bleeding hearts were shed and before the poppies popped open. 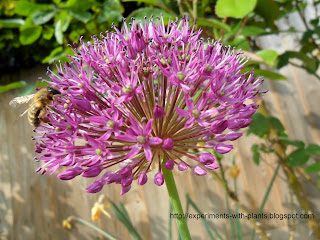 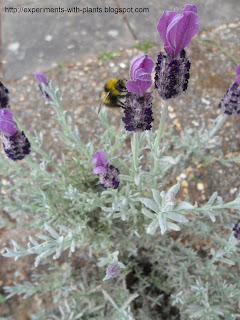 There wasn't much to pollinate here though ....over-wintered seeds of insect-eating saracenia flava bought at the Chelsea Flower Show 2010 (I haven't entirely given up hope yet) and cuttings from my mother's garden which looked so promising a couple of months ago when the foxglove spires were just a twinkle in my eye. 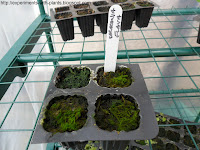 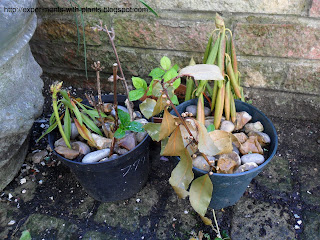 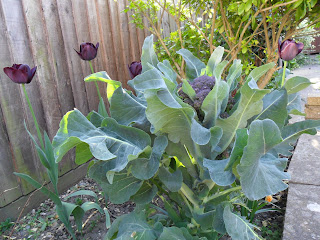 I have never planted with colour schemes in mind, instead I trust  Mother Nature to blend textures and colours in a timely manner.  How was I to know that the supposedly chartreuse romanesco broccoli would proudly sport a bright purple head complemented by the late-flowering tulips that I planted around it ?  ..... or that the magenta and white roses would bloom at the same time as the dianthus which shares their flower bed. 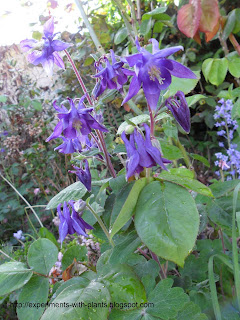 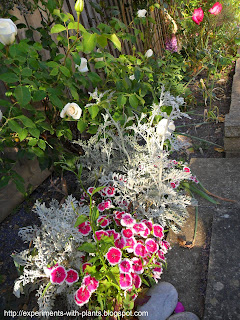 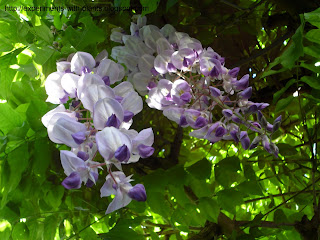 I had great expectations of the wisteria, but it produced just four blooms while the neighbouring cherry blossom tree flowered prolifically. Then the wisteria proceeded to strangle the cherry again, forcing me to intervene, just like last year and the year before.
The actions of pruning it back were somehow more reminiscent than a birthday or christmas. Increasingly, it seems that my garden is defining my calendar and my memories, whether about gardening or not, are set in the context of my experiments with plants. 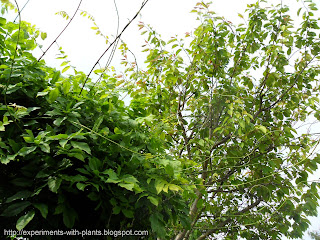 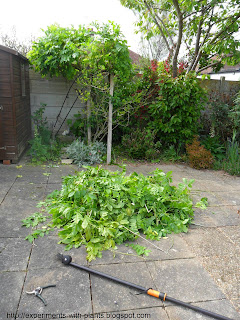 The UK Phenology Network relies on support from members of the public to track the first signs of spring around the British Isles every year, following the initiative of Robert Marsham in 1736 :
http://www.naturescalendar.org.uk/research/phenology.htm

I find that many of the best combinations in my garden are the result of me getting out of the way rather than taking control. I love the observation on the dicentra--I will look at the flowers differently from now on.

The pollinators which got in the way of your photos of flowers are very much a welcomed sight. Your garden got to be thriving with their presence. Love your flowers which I can only admire from your photos. We definitely do not have anything like those with Summer the whole year round. Yeah, from June 21 to June 20 the following year. :) Thanks for even considering voting for the contest I am participating. Unfortunately, a Facebook account is required to vote. Have a great week.

I love what you say about the garden defining your calendar and giving your memories their context--I definitely find the year going by in less of a blur because the garden events are such clear markers of time.

Carolyn - I agree, before I became a gardener, my garden was more beautiful from a distance. It was full and green. Now I have deweeded and pruned, it looks neater, but has lost some of its essence. Maybe I should get out of the way for a while.

One - The weather is a favourite topic of conversation in the UK because our weather is quite unpredictable. It's a great way of filling an awkward silence.

Thanks Stacy. Gardening also encourages me to look forward in time, in a way that I never did before.

I agree sometimes I need to just get out of the way of my garden although right now I need to weed it first...lovely thoughts

I love when an unexpected flower combination turns out to be perfect. Who would have thought to combine purple broccoli heads and purple tulips? I also really like how he bleeding heat reaches out of he planter!

Thanks Deb - I actually didn't know that the broccoli would be purple. The seed packet showed a lime-green broccoli head. The tulips were planted last year, so it was a complete coincidence.

Some very happy coincidences going on in your garden perhaps because you are not a control-freak gardener but an observer who intervenes when necessary, like rescuing the cherry from the murderous attempts by Wisteria. The law of physics described in the Dicentra is pure poetry. Thanks for the UK phenology link too.

Thanks Laura - I take that as a compliment. I am certainly not a control-freak gardener.